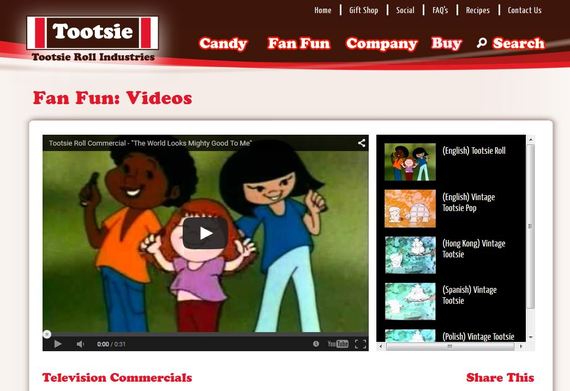 You've probably forgotten about me by now, but I am certain you remember my work. I'm the "Tootsie Roll girl." That kid who sang the jingle in the 70s. The one that goes: "Whatever it is I think I see, becomes a Tootsie Roll to me." Yeah, that one.

There was another kid who sang the rest of the song with me, but I had the solo. The iconic solo. The solo that helped to sell your product for nearly four decades now. The solo from the jingle featured on your website, a Food Network special, a rap song, and embedded in the brains of three generations.

I am not sure where I heard this, but I understand that jingle is the longest running cartoon commercial in the history of the world. It's probably true.

To be perfectly upfront, I wasn't hired by you. A musician friend of my dad's was hired to write and record the song, and he hired me and the kid of another musician friend to sing it. I was nine, the other kid was 13. We weren't pros. We were just little kids who could sing and were given the opportunity to do this cool thing. We had no idea how cool it would turn out to be.

We were paid by that guy. We each got 50 dollars in cash in a white envelope. There were no contracts, and no relevant labor laws yet. I worked 13 hours straight that day. I loved every second of it and remember it vividly, although it was 39 years ago. I like to say it was the best day of my life. It's probably true.

Here's the hitch, and I've been thinking about this for literally 20 years. You made a killing off that song, and I got 50 dollars in cash in a white envelope. I wrote you about this when I was in my twenties and received a personally signed letter from company president Ellen R. Gordon. And, a box of Tootsie Roll products. I particularly liked the caramel covered apple lollipops. I did not like the part where Ms. Gordon stated that "[c]onsistent with our long standing policy, this ad was recorded on a work for hire bases, so there are no residuals." 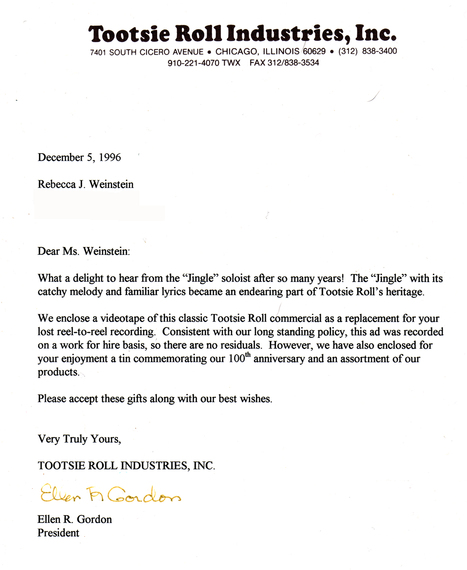 Many years ago I went to law school, and though I don't practice anymore, I still know how to think like a lawyer - so I am aware that contract issues (and time) profoundly impact whether this is a "good case." Regardless, the law does not neatly tie up every issue on earth and sometimes the law doesn't truly address fairness. I am still considering my options. There are always options, and one is to publicly discuss this matter of fairness with the public at large.

I'm sure opinions will differ. I am of the opinion that sometimes a company should do the right thing by someone who, as it turns out, gave them a tremendous windfall. It's something to think about. 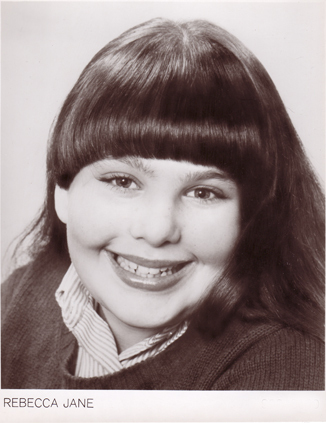