How often have you taken a prescription drug during the last year to treat an illness? Did you pause to ponder what you would do if you had not had access to the drug? Or did you perhaps consider how long it took the drug to be developed, and how long it will be possible to use it for? In the case of antibiotics, there is a real fear that many well-known drugs will cease to be effective against bacterial infections as the bacteria adapt 'around' the drug. What about if you are in a developing country, in a remote area, or on the way to Mars -- how would you get that new drug? Also, what about the promise of personal medicine? Soon we are going to know more and more about our individual medical needs, driven by personal data arising from personal genomics as well as the promise of cheap sensors that record our motion, behavior, vital signs, bio-chemical markers and so on.

Drug discovery is under pressure. Escalating costs for the entire process -- from molecule to patient can take 10-20 years and cost several billions of dollars. Regulation is a big factor -- how to ensure effectiveness and safety? And there are the generic drug makers. Unlike a fancy expensive brand-name watch, or item of clothing, generic forms of the same drug use the same compound and place price pressures as soon as the patent expires. Something has to give. How can it be that in a world where there are two new smart phone generations per year, it takes 20 years to get a new drug on the market? Of course clinical trials ensuring safety, effectiveness, and behavior in large populations takes time, as does drug discovery, testing, and manufacturing. What can be done? I think there are three important steps that could literally transform healthcare for the entire human race.

By doing this in the lab we can automate and share the synthesis of new molecules and biologics. Right now the art of the chemist is very hard to reproduce and reproducing new molecules can take many months or years due to problems in getting the assembly process right. The skill of making molecules takes almost a decade of training. Robotics has been used to automate 'simple' variations and allow testing, but the ability to 'app' chemical reactions and purification is still limited. We should aim to give every molecule a digital blueprint and adopt common standards to allow us to 'dial a molecule'.

If the drug can be reduced to a digital blueprint then the job of manufacturing, on a smaller scale and to order, makes the entire process much more flexible (one could envisage that the local Pharmacy could be come the place of manufacture). 'Old' drugs that are no longer made, like an out of print book, can be accessible and new models for distribution can be explored. Also, the timeline for going from discovery to manufacture will be reduced as it will utilise the molecular digital blueprint. In addition, for people needing several drugs every day, it could be possible to combine them into a single tablet rather than take many different tablets at various times of day.

Given the internet of everything and the current revolution in personal fitness and medical tracking, new drugs could be explored via a process of crowd-sourcing. Combining this with personal genomics could allow a vast expansion of medical knowledge vastly speeding up treatment, making the process of drug validation more open, and also spotting problems and side effects over large diverse population more quickly. Real time updates could even allow healthcare professionals to monitor the emergence of new diseases, drug-resistant bacteria, and deal with the event in much smarter way. Different locations may be able to use different drug combinations to fight slightly different forms of a rapidly spreading disease for instance.

Although each of these three steps seems far off, I believe that it will be possible to achieve all of these. Of course, beyond the scientific and technical issues there are practical, ethical, commercial, and social issues that need to be addressed. Could the drug manufacturing Pharmacy be broken into and the digital blue prints be 'hacked' for recreational drugs? Could crowd-sourced clinical trials be dangerous and not controlled enough to be any use? Is there any real need for real-time monitoring of drug effectiveness?

Think of the possible benefits. Drugs on demand, new approaches to innovation, shorter discovery times, elimination of drug counterfeiting, the ability to personalise drug prescriptions, reduce side effects and so on. A new approach may even allow smaller companies to take part in 'open-source' drug discovery bringing increased innovation and competition. New business models will be possible, medicine will become cheaper, more distributed, more configurable. But most of all, these approaches together could allow everyone to get universal access to drugs at the point of need. 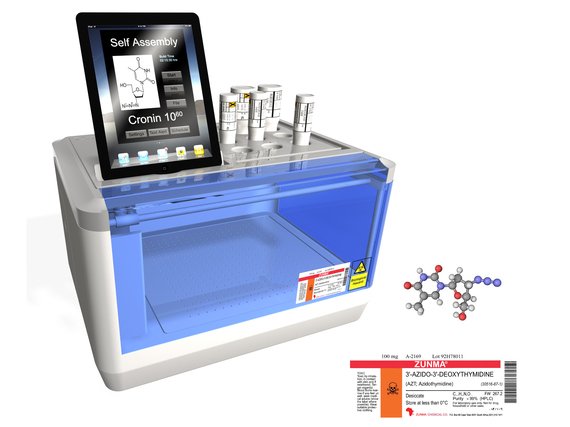