When we lovingly laugh in our own face, we invite others to drop their defenses. This facilitates trust and communication, and liberates energy to move forward in beneficial collaboration. 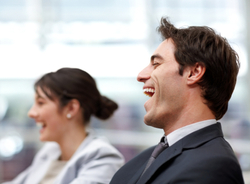 As a baseball fan growing up in New York City, one of my great baseball heroes as a child was Casey Stengel, who was manager of the Yankees, and later the Mets. I remember him as an old man, a long-time beloved figure in New York. That wasn't always the case. When he was a rookie, the fans in New York disliked him. In fact, they booed him loudly whenever he came on the field. Then one day, Casey Stengel walked to the plate to bat, and as usual the fans booed him. Only this time, he tipped his cap and a little sparrow flew out from under his cap.

Everyone in the ballpark cheered, and he was never booed again. Think about it. One playful gesture changing the hearts of 20,000 ... New Yorkers! So of course the lesson is, if you're going to flip somebody the bird -- make it a real bird.

Apparently, Stengel had seen the sparrow when he was in the outfield, and impulsively scooped it up. He had a tough crowd to impress, but it certainly worked.

Another individual who used "self-facing" laughter to great advantage was Abraham Lincoln. In the midst of a debate, an opponent called him two-faced. Pointing to his homely mug, Lincoln told the audience, "Now I ask you. If I were two-faced would I be using THIS ONE?"

If we stop and consider how much of our formal interactions in business -- particularly with colleagues we don't know that well -- are about saving or losing face, when we can use self-effacing or self-facing humor to release the tension, we benefit everyone in the room. George Burns once joked, "Honesty and sincerity. If you can fake those, you've got it made."

And ... as we pretty much all realize, most of us can tell the real sincerity from the fake.

A joke that is genuinely on oneself, and not meant to manipulate, can bring everyone in the room closer. I once read a story about a manager who had the unpleasant task of telling his department that it was being eliminated, and everyone was being laid off. He stood in front of the group, and when his mission and message became clear, he opened his jacket. He was wearing a tee shirt with a big target painted on it. He "took the hit", and even though nothing in the situation changed, he did indeed soften the blow with humor.

I am fortunate that I get to present and perform in unusual venues, and one of the most interesting was something called The Holistic Lawyers Conference in the Florida Keys. After my presentation on the uses of humor to relieve tension and bring people together, one of the attorneys told me a story about being involved in a very contentious lawsuit. At one point the opposing attorney made an offer, which our guy found blatantly outrageous and insulting. All he could do in response was utter a Three Stooges, "Nyuk, nyuk, nyuk."

To his amazement, the opposing attorney responded with his own, "Ah, wiseguy, eh?" They continued doing 3 Stooges shtick back and forth until they were both laughing. The tension was broken, and they ended up resolving their differences almost immediately.

Not long after that I myself was involved in a rather difficult negotiation, where it seemed that everything I said dug the hole deeper. Finally, I hung up the phone in frustration. Then I got an idea. I called the individual back and said, "Hi, this is Steve Bhaerman. Did someone just call you pretending to be me?"

We both laughed, and the negotiation got done to everyone's satisfaction.

I have a more recent tale of self-facing laughter and "fool-realization".

A few years ago, my wife Trudy and I were visiting her sister Rita who lives on a lake in Michigan. After dinner Rita invited some neighbors over for a bonfire. As we stood around the bonfire, I noticed a few errant embers on the grass, and went to kick them back into the fire. What I didn't know was I was standing right at the edge of the lake. I lost my balance and before I knew it, I was in the lake, waist-deep in water.

Fortunately Rita saved the day. She shouted, "You have been baptized! Are you saved?"

Picking up the cue, I leaped up and shouted even louder, "I AM SAVED! PRAISE THE LORD!" And everyone in the group burst out laughing WITH me, and not AT me. Thanks to being able to embody the mantra, "It's a joke -‐ laugh!" I helped create a field of humor, not humiliation. I had as much fun as I could under the circumstances. Standing in the water, I took off my shoes and water poured from them. Someone said, "Hey, is this part of your comedy routine?"

And so it was. Instead of being the comedian that day (poking fun at others), I was the clown (being the subject and object of the humor myself). Not only was I able to quickly recover from the dunking, but I was able to say to the Universal Trickster, "Dunkerschein!" Thank you for giving me the opportunity to take one for the team and raise the laugh force in the vicinity.

Keep in mind that this kind of self-facing humor is not about putting oneself down, which tends to make others as uncomfortable as if we were puffing ourselves up. Interestingly, the words human, humor, humility and humus all come from the same root. By using self-facing HUMOR, we show we are HUMAN and demonstrate HUMILITY so we aren't HUMILIATED by having our face ground in the HUMUS.