Getting a new embassy up and running is a tremendous task. Joseph Edward Lake was the second U.S. Ambassador to Mongolia, and the first to reside permanently in the country. He was charged with establishing a functional embassy in Ulaanbaatar, the capital of Mongolia.

Mongolia was historically a socialist state with very strong ties to the Soviet Union. The U.S. officially recognized Mongolia on January 27, 1987, and the first embassy was opened the following year. In late 1989, Mongolian students engaged in large protests against the government, leading to a call for democratic elections the following year. Ambassador Lake oversaw the first democratic elections and the coordination of U.S. and international aid for Mongolia. 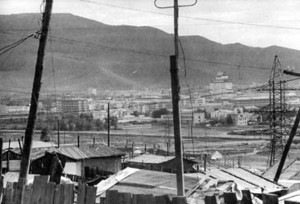 This account was compiled from an interview done by ADST with Lake in 1994. Read the entire account on ADST.org. This account was edited by C. Bond. LAKE: My wife and I arrived in Ulaanbaatar in July of 1990. We were the seventh and eighth Americans to live in Mongolia since 1921...In January of 1993 we had over 160 Americans living in Mongolia. So we had this tremendous explosion of American presence.

If we as Americans believe in the democratic process, if we believe in the concepts of a free market economy as we say we do, Mongolia is a place where we can make a difference.

On the day before the first democratically elected parliament was held [in August 1990], my deputy, Mike Senko, received a phone call from one of the members of parliament, an opposition member, who said: "Do you have a copy of [the parliamentary guidebook] Robert's Rules of Order?"

And he said: "Well, can you tell us how to run a parliament?" These were people who had no idea how a democratic parliament functioned.

Ulaanbaatar was a classic run-down provincial Soviet city. There was no apartment for the Ambassador, because there had been no Ambassador. We had a TDY [Temporary Duty Assignment] apartment with approximately 410 square feet with one bedroom. That became the residence.

The Embassy was actually slightly larger, almost six hundred square feet. It had two bedrooms. It was downstairs in the apartment building in which we lived. The problem with the Embassy was that when I arrived, there were not enough offices... 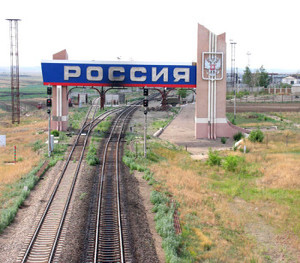 [At] the last minute, the decision was made for me to arrive a few days earlier. So instead of having three days to prepare ourselves in Beijing, we had twenty-four hours.

We were not certain anyone knew we were arriving in Ulaanbaatar because the communications are so bad. (I did a survey after the Secretary's visit and my estimate was that about sixty percent of the messages got through.)

But the Chief of Protocol and the whole embassy staff, all four of them, met us when we arrived. In any event, we arrived early and three days later the advance team arrived for the Secretary's visit...

The key decision on whether the Secretary would visit was whether we, the observers on the ground, felt that the elections were truly democratic. We brought in four observers, one from Washington and three from Beijing, to look at the political process.

Our evaluation was that the election was a fair, open, democratic process, surprisingly so when you consider what they had been through throughout their history. The Secretary [of State James Baker] arrived shortly thereafter, within a couple of days....

I knew something was up when it was time for the Secretary's plane to land and the plane kept circling the airport. There was a military representative on the plane and said he needed to get to the Embassy right away, so we got him to the Embassy.

As it turned out, as the Secretary was arriving, the Iraqis were invading Kuwait. They had been receiving the word on the airplane and that was why they were circling to find out exactly what was going on.

The result was the decision to drastically curtail the planned four-day visit. There was a series of brief meetings that day in Ulaanbaatar and the Secretary left on the second day....The Mongolians were obviously very disappointed....

Mongolia was the first nation which had a long communist history to transform itself [to a democracy] or attempt to do so. In 1990, when I arrived, Mongolia was still essentially a traditional communist country from the inner core of the old Soviet Empire....

First of all the Mongolians received us with open arms. They were excited to have Americans. They wanted another outlet. They obviously saw us as a counterweight to the traditional Chinese and the Russian role. As change began to take place in Mongolia the U.S. was idealized far beyond our capabilities and reality...

Because we had been the evil monster for so long, now we seemed perfect in everything that we did from an economic perspective, political perspective, etc. So to put it mildly, we were welcomed with open arms and the Mongolians were cruelly crushed that we did not do more. 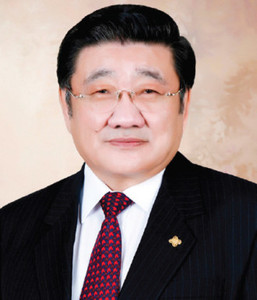 In September of 1990, the President actually asked me to arrange for a $230 million dollar a year assistance for Mongolia, figuring this would replace the Russian assistance. They did not even conceive of the magnitude of problems, etc. this would entail in terms of the U.S. bureaucracy. They simply saw us as the answer to everything.

There were some very conservative people. The Minister of Defense, for instance, literally shook when I first saw him, He had come up working very close with the Russians and had heard nothing but the most negative propaganda about us.

Mongolians as people, though, were the nicest people I had worked with up to now, anywhere in the world. They are open, they are friendly and honest, and there is this incredible clicking between Mongolians and Americans...

I saw very quickly that this was going to blossom incredibly in terms of the U.S. efforts, as it did. In the course of FY [Fiscal Year] '91, we went from zero planned aid at the beginning of the year to over $30 million dollars in assistance by the end of the year....

The other thing was that, just analyzing what was happening, you could see that Mongolia as it existed in the summer of 1990 was going to cease to exist. This was a country sustained by an incredible volume of Soviet aid. Things were going to change and we had to be prepared for the worst...

In the process, we worked out an invitation from President [George H.W.] Bush to President Ochirbat of Mongolia to come to Washington....Before I left [Mongolia in September 1990], the Mongolians had elected Ochirbat as their democratically elected president in indirect elections -- the parliament had selected him.

On one beautiful Saturday night in the summer about 7:30, the phone rang. It was Brunson McKinley, the Executive Secretary's special assistant.

He said: "Joe, he [Secretary Baker] wants to come next Thursday. Do you think he can?"

I said: "There is no doubt in my mind the Mongolians would invite him and welcome him to come. Trouble is, how do I find out?" 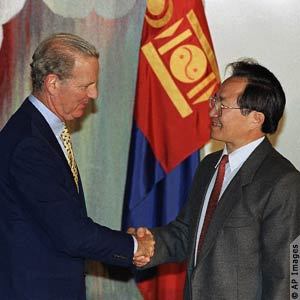 And I said: "Okay. I'll see what I can find out." I couldn't find anybody at any number I had in Ulaanbaatar...So I called [my deputy, Tom Dowling] over and said: "I know where the Foreign Minister and the Prime Minister spend their summer at this little dacha outside of town. We're going to drive out there and see if we can get in. You speak Mongolian and I'm the Ambassador. Between us we might be able to do it."

I put the flags on my car....Drove up to the gate. You can imagine this. You have this Mongolian draftee who is nineteen years old and who is carrying an AK-47 and looking at these guys who pulled up. [My deputy] walked up and said to the Mongolian guard: "My driver is the American Ambassador. This is his ID card. He wants to see either the Foreign Minister or the Prime Minister."

Well, it was clear that this guy had no idea in the world what to do. So he called his sergeant who finally believed us and called in to the compound and the word came back: "Yes, the Foreign Minister will see you."

We went in, went into a waiting room and in walked the Prime Minister. Of course there was no translator or anybody else. Tom [Dowling, the deputy] then proceeded -- he had a Mongolian-English dictionary in hand -- to explain what the situation was. Would he like to invite the Secretary of State? Would it be possible? Tom got the message across.

That was late on Saturday night and they were coming on Thursday. We then proceeded over the next four days to put together a four-day visit for the Secretary of State...We did it all ourselves with incredibly poor communications, but we did the best we could do and put together a visit he was absolutely thrilled by. The Mongolians were also thrilled by it.

The effort got started but it quickly became obvious that the lack of Soviet assistance was a critical problem. The Soviets pulled technicians out of Mongolia -- the biggest immediate direct threat to Mongolia was the potential collapse of the heating system.

Mongolia following the socialist system had a central heating system for the entire city of Ulaanbaatar. The vision that hung over our heads was that in January when it's forty below you would have a collapse of the heating system. Roughly forty percent of the people of Ulaanbaatar, a city of half a million people, would be exposed to forty below weather with no form of heat.

It really became a crisis in the winter of '92-'93. You had a system which gradually began to deteriorate. Parts could not be bought, things began to get worse and worse, things could not be repaired...But because of the overall economic dislocations they had trouble keeping the coal mines producing enough in the summer so that the stockpile was smaller when the winter began and things began to go downhill.

We were getting engineers in to help them figure out how to deal with issues....Without AID and the assistance from the American companies in the energy sector, they simply would not have survived the winter of 1992-1993 with an operating heating system....

In Mongolia you had a different cultural gap. You had people who were college educated, who understood the new things, but had been trained in an entirely different way of looking at things. Quality and efficiency were not key elements in the Soviet structure. A simple example on a very basic level is that we had Mongolian technicians who worked for the Embassy. 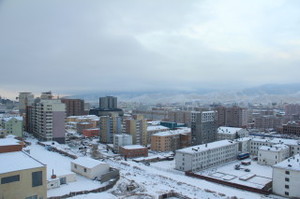 The Mongolians had never seen a level. If you go to Mongolia, the windows aren't square, the doors aren't square, because they didn't use levels. These guys quickly learned to use a level and then used it all the time. It was great fun for their people. Suddenly things could be square and they could be right.

The only interest in Mongolia is if we support the ideals of free democracy and enterprise. Mongolia was one of the places we could make a difference. We were still making a difference at the time I left....