This article is cross-posted on TheCommunity.com.

For many in the West, the Cold War began with the fear that the Russians would drop a nuclear bomb on an American city. It got closer to home when American boys started being shipped off to, and dying in, Vietnam. It ended for many with the collapse of the Soviet Union.

Not so for many in Asia, Central and South America and other regions of the world that became proxy battlefields for the Superpowers in their Cold War jockeying for strategic influence and dominance. While Russia and China supported popular insurrections trying to topple pro-US dictators, the CIA engineered coups and often supported ruthless human rights violators as anti-communist allies in the same regions. As fellow Nobel laureate and former President of Costa Rica Oscar Arias once said, both sides in the Cold War were eager to convert our students into soldiers. "They were eager to provide the weapons," he said, "while we provided the dead." 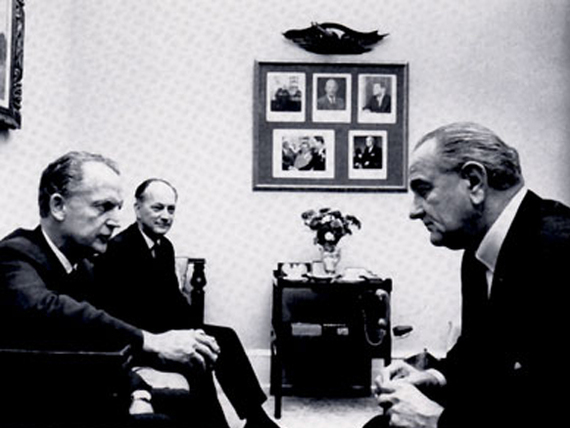 The Look of Silence, a documentary by Joshua Oppenheimer, gives us a slice of life through the eyes of a family member of just one victim of one Cold War massacre: Adi, whose brother was killed during the 1965-66 slaughter of 500,000 - 1,000,000 "suspected communists" by death squads in Indonesia.

The elimination of anyone suspected of being a communist sympathizer was a part of Indonesia's transition to a "New Order," when Indonesia's first President, Sukarno, was swept from power and the Indonesian military, led by U.S. ally Suharto, was swept in. Those executed included not only registered members of Indonesia's legal communist party, but also writers, artists, union members, and thousands of ethnic Chinese.

The U.S. and UK had active roles in engineering the transition, running covert operations in the country beforehand to undermine Sukarno and providing training and equipment to Suharto's military. It went as far as a U.S. embassy employee handing the death squads "checklists" of names of suspected communists, and checking them off when the people named were eliminated.

It is no coincidence that the executions and "transition" were followed by significant investment pouring from the West into the now "stabilized" and resource-rich Indonesia.

Fast forward to 1975; for 400 years Timor-Leste (formerly East Timor), a small half island at the bottom of the Indonesian archipelago, had been occupied by Portugal. The successful 1974 Carnation Revolution in Portugal overthrew a 50-year dictatorship, and set in motion a fast-moving process of disengagement from all Portuguese colonial territories in Africa and Southeast Asia. On November 28, 1975, after the departure of the Portuguese, Timor-Leste declared its independence.

Freedom was short-lived. Nine days later, on December 7, 1975 the Suharto regime, with U.S. blessing and U.S. weapons, launched a large-scale invasion of the island. The invasion was optimistically expected to be a simple operation of few days duration, to "mop up" the pro-independence movement in the country. Instead it lasted 24 years and cost Timor-Leste one third of its population, most of them killed in the first three years of the occupation.

Gerald Ford and Henry Kissinger had paid a visit to Jakarta on December 6, 1975. The invasion of Timor-Leste began less than six hours after their departure from Jakarta.

The ensuing carnage was only possible with open U.S. military backing; U.S. Congressional information of that period shows that in the first two years of Indonesia's invasion of Timor-Leste, deliveries of U.S. weapons to Indonesia doubled.

I lost three siblings in the first three years of the occupation. Two brothers were captured, summarily executed, their bodies dumped in the bush and never recovered. Thanks to caring local villagers, we have been able to recover the body of a sister killed by a U.S.-supplied Bronco counterinsurgency aircraft dropping bombs on her small mountain village.

The Broncos, widely used in the Vietnam war, were delivered to Indonesia in 1977-1978, when the slaughter of the Timorese civilian population was at its worst. Torture and mass executions were commonplace. Political prisoners were dropped live from helicopters, entire villages purposely starved to death, and more.

Most Americans are little aware of either of these events. While there is more familiarity with U.S. backing of Rios Monte in Guatemala, Pinochet in Chile, US involvement in Argentina's "Dirty War" and the US funding of the anti-Sandinista right wing insurgency in Nicaragua, many would be shocked at the deaths caused by US policy and funding in Asia.

I am not a U.S.-basher. Quite the opposite. When I was based in the U.S. between 1975 and 1999, pleading the cause of our people, US Congressmen and women were among our most vocal supporters; countless American and British citizens were among Timor-Leste's friends.

In 1999 when militia gangs were burning Timor-Leste to the ground and massacring civilians, it was an American President, Bill Clinton, who gave the crucial nod to a UN-authorized international force led by Australia that literally saved our people.

I am also a believer in reconciliation. In 2002 when Timor-Leste officially became the millennium's first new independent democracy, then Indonesian President Megawati Sukarnoputri walked into the celebration arm in arm with our newly elected President Xanana Gusmao. Seventeen years after the fall of the Suharto regime, and five elected Presidents later, Timor-Leste enjoys close, constructive relations with a democratic Indonesia. I do not believe that any two countries in Asia enjoy better a relationship today than Timor-Leste and Indonesia.

I do support the declassification of the documents relating to the U.S. involvement in supporting and funding the events leading to the Indonesian bloodbath of 1965-66, as well as their involvement in the invasion of Timor-Leste and other gross human rights violations in the name of the Cold War.

Many of the countries affected, including Timor-Leste, have held their own form of Truth and Reconciliation Commissions to tell the story of their histories and the suffering of their citizens. But the story will not be complete until the full circumstances are known, including the role played by the Superpowers in the blood letting. Citizens of the countries involved, and the survivors and the family members of those lost, deserve to know.