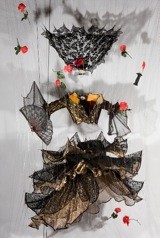 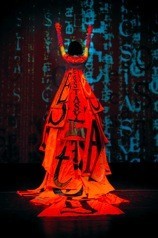 E.V. Day: How did your opera project come about? So many artists have designed props, scenery and costumes for opera, but it is an exceptional undertaking for an artist to do it all.
Lesley Dill: It was fabulous to initiate a tremendous world from step one. It felt as if I had an ocean inside, and the music, the visual projections, the costumes emanated from that internal place like tidal forces. It gave a core unity to the end result. So, this is how Divide Light began...I had been collaborating musically and linguistically for 7 years with Tom Morgan, the director of Ars Nova Singers in Boulder, Colorado. We had already done a CD of songs, I Heard a Voice, and we were looking for another project to work on together. Tom said "Let's do an opera!" and I said "based on Emily Dickinson!"... and we were off and running. Tom had to drop out, and then Richard Marriott, a composer from NY, stepped in to work with me. 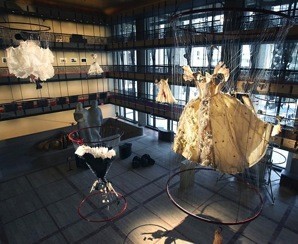 LD: How about you, E.V.? For me your work is wonderfully loaded with drama, expression, sex, violence, and scale, so it makes a lot of sense to me that you would work within the operatic metaphor.
ED: The project started when George Steel, the then newly appointed New York City Opera General Manager and Artistic Director asked me if I'd be interested in making an art installation in the Promenade space at the David H. Koch Theater in Lincoln Center. He said, "Why don't you just come up with your wildest dream...?" and we went through the costume archives, which were just filled with fabulous stuff. My piece in the end wasn't about opera per se, but was for celebrating the opera. It was a statement about what opera is thinking about, it's about inviting the artist to talk about opera and starting a dialogue about opera. The vehicles that I use in my work are often American cultural clichés and so, within the world of opera, I chose to use the most well-known female characters in the opera universe. Super-heroes or super-martyrs, like Carmen, Mimi from La Boheme, and Cio Cio San (Madama Butterfly). 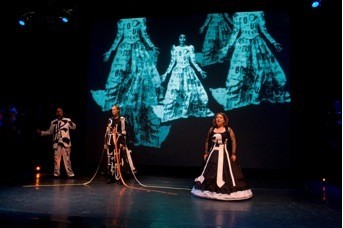 ED: Was creating Divide Light, your opera, something you have always wanted to do, or when did the idea arise?
LD: Though I come from a musical family, I really don't know much about opera but loved the idea of learning. And...I was ready to work with music and language in a more story-built way. I love the idea of visual spectacle ...so it was an opportunity to bring it all together, sound and sensibility. My twenty-year relationship with the language of Emily Dickinson was alive like a big egg inside me, so I felt comfortable in developing the story structure, and being artistic director, like a Herman Melville way, captain of a big poetic musical ship. I wanted to do an opera of the interior life--a theatrical event that through music and song would represent the empathetic spread of human emotion like a flame or flood. Transcendence and personal visionary intoxication through luminosity and apprehension is what this opera is about. 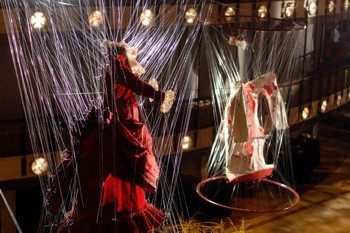 LD: Are you an opera lover?
ED: That's always the first question I get asked when talking about this project! I always answer: "Well I am now!" Opera is a medium I've been aware of since childhood and I always found the melodrama of it somewhat humorous. But when George invited me to the theater to witness the mechanics of opera production, I wondered: "Why had I never considered this before?" My work is somewhat operatic, if not melodramatic and humorous too. The recurring themes in my work --explosion, velocity, spectacle--have an energy that might be termed "operatic." In my art, I use tension to suspend, stretch, and shred garments and to create forms that I liken to futurist abstract paintings in three-dimensions. Their abstraction is melodramatic, powerful, and lyrical, suggesting continued motion. I also think of music when I am working, whether or not there's music on in the background. I see music in my mind, so it seemed natural to take on a direct experience of it. 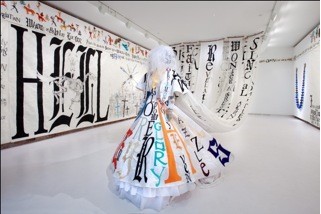 ED: Are there works of art you've made previously that signaled the idea of an opera?
LD: I've done community projects before this, like Tongues on Fire; Visions and Ecstasy, where I worked with a church choir in North Carolina, and Interviews with a Contemplative Mind in Boulder, which involved singers, and I've also done small performance pieces all along for like twenty years...so I guess one could imagine coming from that... but nevertheless it was an unasked-for crown. If you had told me five years ago that I would have completed an opera with seventy-five people and an entire libretto, I would never have believed you. Doing this opera has changed the structure of my art mind. I'm doing an artist book that I think of as an operatic sequence, and I recently did a full-out installation work that is story-based, called HELL HELL HELL / HEAVEN HEAVEN HEAVEN : Encountering Sister Gertrude Morgan and Revelation, which I installed at Arthur Roger Gallery in New Orleans 2010 and which will be traveling to Washington state in 2011. 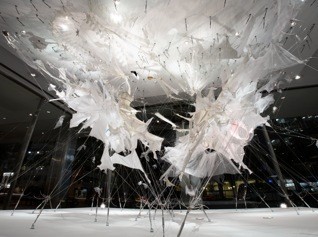 LD: Did getting involved in opera start from your artwork? Do you feel your work with the New York City Opera costumes will affect your art in the future?
ED: Many of my installations strive to extend beyond or give the feeling of stretching beyond the parameters of the space, whether it's a gallery, museum, opera house--like beyond the stage, so to speak. I want people to feel something when they experience my work as well as to think. A tension release from a confinement. Whether it's a phalanx of thongs flying out an atrium or through the wall, floor, or ceiling. Having the experience to work within the "house of drama" and larger-than-life production simply encourages me to take on the big, if not simple, dramas of life and the hereafter. I still like to work on an intimate scale too, as I have recently found there is drama in the center of a flower. And as for violence and sex, that can be a big part, but what it lacks in terms of opera is the Capital-R Romance that seems central to most opera.

ED: Did making the costumes for the opera seem the same as making one of your sculptures?
LD: I wanted the costumes to be vivid word-pictures that were themselves events of reading. There was a costume for each of the three operatic voices that were tailored for the rhythms and harmonics of the role of their voices. The other seven costumes are "performative" costumes that scroll out, pivot, release, pull out, revolve and are "actions" of reading using a number of actors for each performative costume. There is an extravagance to existential investigation that I hoped to have the costumes act out. 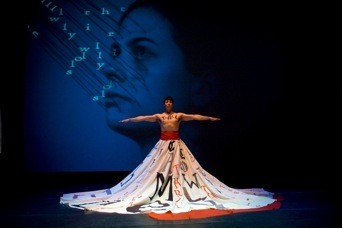 ED: Would you display the costumes in your opera as art objects? Since period dress is a convention of opera production, were you thinking how your style for Divide Light was going to interact with that convention?
LD: Absolutely! Each costume was made to be its own microcosm of Divide Light. I knew that for this opera I didn't want to just be European influenced. I looked to Tan Dun's operas, especially his smaller ones like Ghost Opera. So I wanted the costumes to reflect an Asian influence - Japanese and Indian. I designed them to have angular components, to have the text elements be huge, and when I did color - it was an Asian red amongst the primarily black and white.

LD: Will your installation travel or was it designed exclusively for the New York City Opera and the promenade space?
ED: It was designed specifically for that venue, but also designed to travel, as all the pieces can be packed flat, and I am really excited the whole show is going to The Kentucky Center for the Performing Arts in Louisville next month for a six-month exhibit. At the same time I will be showing the Madame Butterfly sculpture at James Salomon Contemporary Gallery in NYC in a two person show with Alice Aycock. I feel like I could keep working on them more and more because there are so many stories to tell and nuances to pull from. 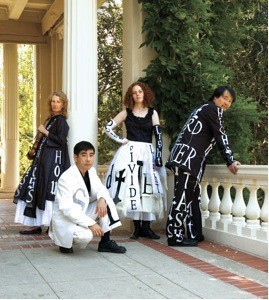 ED: Did you enjoy being a director? I know that you already work with many assistants on gallery and museum projects, but this must have been different with the major components of sound, video projection, actors, singers and musicians. Did it feel just like a larger extension of some of the earlier performances you did in the nineties?
LD: Being the artistic director was a huge challenge! My earlier performance pieces were much smaller, often involving one person in a narrative costume and attendants and sound. For this humongous operatic requirement I went to emotional and artistic places I'd never been before. I spent a couple of nights on the couch bawling like a cartoon while watching TV and then--I learned. I learned how to work with really talented people: the video projection people, the Choral Singers and their director, the composer, the musicians, the production people. It was like being the mayor of a 200-person musical village. And then I loved it. 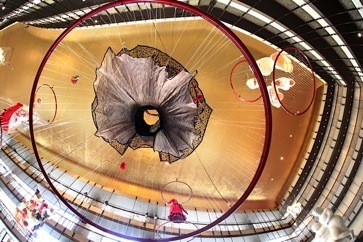 LD: What are your favorite operas?
ED: Lucia de Lammermoor has the most interesting death scene, where she dies in a bloody nightgown and it appears she has been butchered, but she truly dies of a kind of emotional aneurysm, which I think is so poetic. It is like all the feelings that make you want to die, and it kills her. She actually dies from FEELING. Then Madama Butterfly. I have a deep love/hate relationship to that opera and the story makes me want to want to explode. The exploitation of Butterfly is terribly real. It is more than heartbreaking: it is about political injustice, and rendered through a visceral emotional story. ... I love that opera has the ability to evoke a deeply emotional experience, larger than life in four dimensions, visual, motion, music and story. When you feel politics at an emotional pitch it can inspire one into action. As old as the convention of Opera is, it is still potentially the most powerful art form. It is the Olympics of art with the grandest and most rarefied elements. The stages are the largest, the orchestras are the biggest, the costumes are scaled up accommodate a minimum of 30 feet viewing point, the voices perform the most difficult vocal stunts, and the tickets, in general are the most expensive... My sculptures aim to freeze the moment of emotional transformation. They are operatic in idea, but they are not Opera.