Imagine a world in which the Golden Age of Cinema had never ended. We had decided that it was so wonderful, it should just be preserved as it was. The experimental scripts and soundtracks of the 70's never happened. Neither did the evolution of the modern action movie, or the romantic comedies of the 80's. No 90's Indie films, or digital special effects. Why? Because the films made in the Golden Age were so beloved, so perfect and so successful that we just kept making them over and over. Not updated versions, no: we copied the costumes, the soundtrack, the script, everything. And we assumed that people would keep coming because the original was SO GOOD. Nothing anyone could write now could ever be as great as films like Casablanca, or Guess Who's Coming to Dinner? Imagine if we measured the actors' success based on how closely they resembled Humphrey Bogart or Katherine Hepburn.

This world exists. It is the world of the opera establishment.

Whilst there is innovation happening in opera, we are still thought of as a kind of musical museum. Yes, there are new works being written, and new stagings being mounted, but none of these seem able to alter the accepted notion that "what sells" is the traditional stuff: the most popular hits of the Golden Age, done the same way as they always were. 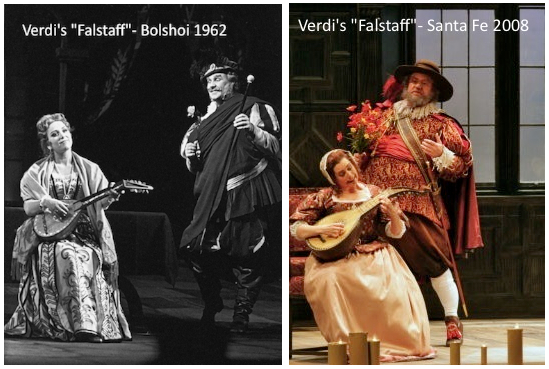 Back in our strange, repetitive film-land (let's call it Follywood), there is an audience who attends every new release of It's a Wonderful Life. They know every actor who ever played the lead role, they have their opinions on who was the best interpreter of Jimmy Stewart's original performance. They are also scathing about any inconsistencies, or attempts to challenge their expectations. Try casting creatively -- say, with a blonde man, or a black man -- and experience the utter confusion in Follywood. Reviews of these films will state that the new actor "didn't capture the spirit of the role", or "wasn't a believable George Bailey". They might even go so far as to say that this blasphemous new film "didn't honor the wishes of the director." (Meaning, of course, the original director.) But most people have stopped going to the cinema altogether, because they feel that it is only for the "aficionados". Still with me?

As an opera singer, none of these scenarios sound fantastical to me. I have read many, many opera reviews like these. The majority of productions in which I have performed were largely indistinguishable from those of a bygone era.

In a recent article in The Telegraph, outgoing Director of the Royal Opera House Kasper Holten expressed similar concerns about the state of opera:

We know how the Hollywood model works: you're successful with one thing and you make the sequel. But how often is the sequel better than the first movie? Very, very rarely.

As the Artistic Director of a newly-hatched opera company, I am invested in finding ways to get opera off this island of aficionados -- or at least in building some bridges to the mainland. Our company, Victory Hall Opera, based in Charlottesville, VA, is part of a wave of pioneering "indie" companies. From the short, new works at Urban Arias in DC to the risk-taking productions by Beth Morrison Projects and the tech-based experiences at The Industry-LA, small companies are seeking whatever comes next. And their popularity and number are growing rapidly.

But does this mean the end of all that we love about traditional opera? No way. We can keep the Mozart and Puccini too, so long as we do three things:

1: Cultivate a voracious hunger for new ideas.
Look to Indie-opera as a bellwether. These companies are in a better position to innovate and take risks. With smaller performance venues, and lower fixed costs, they can focus on developing a more intimate, contemporary opera aesthetic. Meanwhile, big companies will have a chance to see what innovations are proving to be successful, and become more attuned to the zeitgeist.

2: Cast outside the box.
Celebrate the uniqueness of every performing artist, even -- or especially -- if they don't fit the mold. We should seek creative outliers, cast them in unexpected ways and give them the freedom to be themselves: just as individual, incomparable and radical as the superstars of the Golden Age.

3: Stop recreating and start creating.
Let's take a cue from the worlds of contemporary art, film, theater and dance: whether the material is old or new, let's make it relevant to our time. Just like these others, our art form can undergo evolution and thrive. There is no longer any excuse for spending millions of dollars on a production that is 100% traditional. That's not a work of art. It's a reproduction.

The Golden Age was wonderful. Now let's move on.

It's what Mozart and Puccini would have wanted.