On a scorching day back in April 2013, among the ruins of a failed U.S.-backed development project, Liberian women gathered to tell their stories of sexual abuse and exploitation at the hands of Buchanan Renewables bosses. The U.S. Overseas Private Investment Corporation (OPIC) approved $217 million in "development" financing for Buchanan Renewables to carry out an energy project in Liberia, which was a spectacular failure and led to the abuses that these women suffered. By failing to take appropriate precautions to protect the vulnerable communities in Liberia and heed warnings of abuse and major project defects, OPIC failed its development mandate and perpetuated livelihood destruction, severe worker injuries, harm to indigenous peoples, water contamination, forest degradation, and human rights abuses. When things turned really ugly, Buchanan Renewables abandoned the project, had a third party pay off its OPIC loans, and all sides washed their hands of liability. It's business after all. Win some, lose some.

To add insult to injury, as OPIC and Buchanan Renewables shook hands and walked away, they blatantly ignored the Liberians' pleas for redress for the environmental and human rights harm that occurred. These men, women and children have yet to receive any remedy or support to repair the damage to the social and economic fabric of their communities. If this occurred in an American town, we would be outraged.

But you didn't see OPIC President and CEO Elizabeth Littlefield touting the details of the mess that her agency and Buchanan Renewables left behind and the communities that have to live with it. Rather, in a self-congratulatory posting on February 27, 2015, Littlefield celebrated how OPIC's financing and risk insurance has transformed private investment into long-term economic development success stories. She writes, "In a nutshell, it's bang for the buck in places that need it most." Meanwhile, communities in Liberia wondered what happened to their long-term economic development success story. 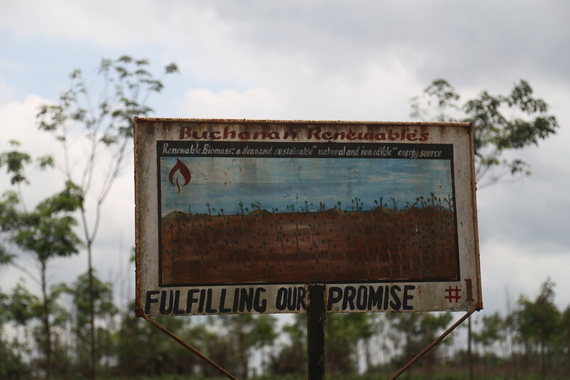 Littlefield pushes even further to state that, unlike some large, high-profile investors that have not always been model citizens, development finance institutions like "OPIC that uphold strict environmental and social standards can be a model for other investors and have powerful, positive impacts."

This statement is both unsettling and ironic. It is unsettling because either OPIC truly believes that its standards are adequate and the harm in Liberia was not really that bad, or OPIC is simply denying the reality on the ground and its own institutional weaknesses. It is ironic because OPIC's own Office of Accountability released an investigative report on the agency's role in the botched Buchanan Renewables project. The report revealed OPIC's failure to collect baseline project data, conduct human rights due diligence, mitigate project and community-level risks and monitor its investments. Rather than immediately correcting mistakes and taking the action that the report recommends, it took provisions in an act of Congress to get OPIC to pay attention. If OPIC were a "model" for other investors, the Liberians would be the first to tell you to run the other way.

There is no doubt that development assistance and investment in its many forms can provide innumerable advantages to communities like those in Liberia, by way of jobs, infrastructure, educational opportunities, and a host of other tangible and intangible benefits. In fact, Liberian communities were excited when they first learned about the Buchanan Renewables project. However, big gains imply big risks, which can lead to catastrophic results, particularly in fragile and post-conflict regions where institutions are weak and communities are vulnerable. In these situations, "model" investors mitigate those risks, proactively address deficiencies and gaps, and resolve problems when they occur. "Model" investors do not shirk away and sweep them under the rug; they live by "strict environmental and social standards," and provide redress when things go wrong.

Littlefield's posting is a testament to the fact that it is easy to take credit, but difficult to take responsibility. Perhaps it would be forgivable if OPIC were one of those "big, high-profile investors." But OPIC isn't just some private enterprise. It is a U.S. agency, representing the interests of U.S. taxpayers in its business dealings, and our names are all over the fallout in Liberia -- a country ravaged by Ebola, recovering from a bloody civil war, and possessing few economic prospects. In a world rife with instability, is it really in our interest to leave these people with no redress for the harm they suffered? Or should we demand that OPIC live up to its self-proclaimed identity as a "model" investor?

Kindra serves as the Policy Director for Accountability Counsel, a non-profit legal organization that amplifies the voices of communities around the world to protect their human rights and environment.