We've all heard that opposites attract. My parents were just about the most opposite people you could find.

My mother, Evelyn, was quiet, elegant and intelligent. My father, Maurice, was loud, lovable and crass. Taste was not exactly his strong suit except, of course, his great taste in women.

They met at a party. He saw this stunning, very young, exotic-looking woman modern dancing. Alone. Seductively. Twenty years older, he was intrigued.

Here are the Cliff Notes to get you up to speed: They dated. He knocked her up. He said he didn't want kids. She was set to have an abortion. Her family strong-armed him or he had a change of heart -- or both. She had their first child, my brother Alan, but first they had a quickie wedding in Vegas -- where else? For the first meal in their home together, my mother cooked. My father complained about the way she made the eggs. She threw the whole pan of eggs at him. Two years after the first child, my mom got pregnant with me.

Life was not quite happy in the Duke home. The family tried living on the beach in Malibu. My mother's beloved cat Jezebel got hit by a car on PCH and died. She decided this would not be the place to raise her kids. It would be Beverly Hills, known to have a great public school system. The house on South Roxbury Drive cost $25,000 and came with a cat named Hangover. My father arranged for my mom, who happened to have very good taste, to go into business with some dude who was an interior decorator. They were doing some interior decorating all right -- on beds. You get the idea. Things were getting shady. But, shit happens. My mother had convinced herself that my father, who was Mickey Rooney's manager and hung out with him a lot, must have been scoring a lot of broads with the Mick. I wasn't there, I wouldn't know. My father was physically handicapped. It never stopped him from scoring great looking women, my mom included, but he wasn't the player my mother had assumed and which she used to justify having an affair with my father's so-called "friend." I would not find out any of these sordid details until I was in my twenties.

From the moment of their divorce (made legal in Tijuana, where else?), our parents became the best of friends and even better parents. We were a family unit. As a family, though we lived in two different homes, we did everything together. During the week, my father worked at various studios as a producer of B, if not C, movies, and we went to school. On Friday night, we went out to a restaurant. All four of us. Saturday morning, a deli for breakfast. Sunday morning, my mother would often cook a brunch. In the afternoon, just us kids would head off to see my father's mother, at least on his custodial weekend. For a few years my mother dated a lawyer who would end up not marrying her, though she seemed to be auditioning hard for that job.

My father had a close friend named June Wilkinson, a va-va-voom B-movie actress and Playboy model and sometimes the fifth wheel at our family meals. A romantic involvement between those two was never revealed, though I have my suspicions. My father dated a woman named Rachel on and off for several years. No one in either parent's love life ever became more important than us, the children.

For many years, we all joked that after 25 years of divorce, we should have a silver divorce anniversary party. So we did. It became a very large production of a party. My brother and I put on our producer hats -- my brother much more so than me. The Lehr family made the engraved invitations. The venue would be The Friars Club and there would be a roast with top comedians who were friendly with my father. Much of the roast material was written by a one-time "Honeymooners" writer, Bob Hilliard. It was one of the greatest parties I had ever been to. My father had just survived colon cancer a year before. My mother was there for my father during his illness. They were both always there for each other. At the 25th divorce anniversary party, my father made a speech. He stood on the dais, looked at his ex-wife, my mother, in the audience, and said: "It was so much fun divorcing you Evelyn, lets get divorced again." She laughed. In fact, by this time in life, my father was my mother's only and best friend in the world.

Which brings us to 10 years after the 25th divorce party. Now, my parents were divorced 35 years. My brother the lawyer did some calculating. He realized they were married just shy of my mother being eligible for dad's Social Security. She was getting near that age. He was getting way up there. My brother thought, our father will die and our mother will not be able to live on his Social Security. They had only been married nine years. My father and brother concocted the plan: my parents would get married. Again. My parents were already more married and loyal to each other than most legally married couples.

My father made an honest woman out of my mother, not once but twice, when he went with her to renew their vows in a courthouse in Santa Monica. I had never known the old fashioned, corny side of my mother until I saw the glow in her smile the moment she remarried the love of her life. Our plan was that our father's much younger bride -- our mother -- would take really good care of our father when he got very weak and old. That plan went out the window when after only a few years of my mother collecting $1,200 a month in Social Security, she became very ill. She was diagnosed with lung cancer, which had spread to her bones. She would die within three months. My 85-year-old father went to his 66-year old wife's funeral in shock. He would die in my arms a year later with me yelling at him in the hospital, "Don't die dad, everyone will think you were in love with Evelyn!" My parents might not have been a conventional couple, but they had a love for each other that was deep and, in their own way, loyal. They were my romantic role models.

After the disastrous first meal my mother cooked, she learned to make a favorite dish for my father. Matzo brei. She perfected the dish so as not to have to throw it on him. 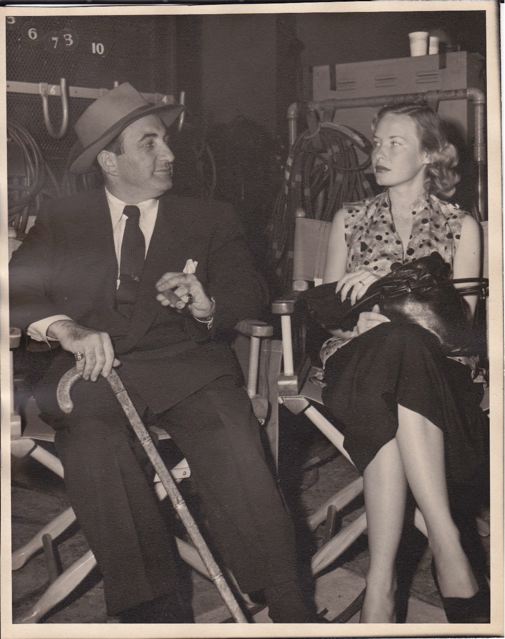