Unless you're a coal miner working deep beneath the cold Chilean ground, you've likely heard that Oprah Winfrey is set to end her award-winning television talk show in 2011 after 25 years. The beloved Queen of Daytime TV kept America's eyes glued to her show throughout 2010, counting down each episode toward an incredible awe-inspiring transformation that moves Oprah from ABC to her "OWN" cable channel and online platform.

In a departure from the routine retirement clichés that fill the halls of fame depicting previous popular television shows, the Oprah Winfrey Show isn't being relegated to re-runs on some obscure channel in cable land. And Oprah's sun isn't setting. In fact, it's shining brighter.

Oprah, who has transformed multiple times in her illustrious career, is doing it again.

From unknown news reporter, to one-of-many daytime television talk show hosts, to celebrated actress, to above-the-fray messenger of goodwill and positive perspectives, Oprah has set herself apart from anyone we've ever known in the history of television media. And after moving into our living rooms, making herself comfortable as a household name and a welcome member in all American families, Oprah has bid us farewell to embark upon yet another journey of historic proportions.

But who would've thought this iconic Black woman, whose name is more popular than President Barack Obama, would venture into a White male-dominated cable television world where few Black media owners have ever successfully trod?

The opening of 2011 began with the announcement of the Oprah Winfrey Network, a collaborative cable venture that transformed Oprah Winfrey, the individual, to Oprah, the institution. Oprah's Discovery Channel partner, which opened the door for her to become the first Black female media network owner in a White male-dominated cable landscape, is expected to benefit significantly from the personal brand magic that follows Oprah wherever she goes and uplifts anyone she touches.

Yet, while the New York Times led media banter about the launch of the Oprah Winfrey Network and its innovative online marketing campaign that invited the American public to compete for the coveted spot of having one's "OWN" show, there was another important story unfolding beneath the media good cheer and well-wishing.

Oprah's entry into the land of cable television broke new ground for Black Americans. She sprouted up through the foundation of institutionalized racist rules and policies, which had long buried Black hopes of television and cable media ownership and cemented minorities to a level beneath the competitive playing field.

Oprah Winfrey, the individual, made history on daytime television, winning the hearts of Americans across racial lines. But it was Oprah, the institution, who grew strong enough to crack through an economic ceiling-floor built by a small handful of powerful men with government support.

Few folks know the history of cable television, which began in the 40s and early 50s, when Blacks were still struggling against government-sanctioned institutionalized racism across America. The entire media industry was dominated by Whites from inception through the Civil Rights era, with an exception for the spattering of Black-owned newspapers and magazines.

In 1972, when John H. Johnson was building the very first Black-owned commercial building in downtown Chicago for the historic Ebony-Jet headquarters, HBO was being introduced to the American public on cable TV. The meteoric rise of cable matched the skyrocketing popularity of network television, all of which was dominated by White media owners and corporate advertisers.

Today, few Whites know about the first national magazine to chronicle the lifestyles of Black Americans and display positive Black images and factual news to contrast the negative stereotypes and propaganda portrayed in White media. The Ebony-Jet empire, which has iconic status throughout Black America, is today still considered an ethnic fringe by many advertisers, publishers and broadcast executives in the White-dominated media.

Meanwhile, cable television has risen far beyond HBO. Oprah's entry into cable land is a monumental feat that looms even larger when contrasted with the historic timeline of Black struggles for opportunity in the tightly controlled landscape of American capitalism.

In 2011, Whites continue to dominate media, owning 97 percent of the entire market. Blacks and other racial minority groups, which make up 35 percent of the American landscape, split a small 3 percent of crumbs on the edges of the media market pie.

The FCC, which has been under orders by Congress to produce accurate reports of media ownership based upon racial and gender demographics, has remained flat-footed and has yet to issue the report due in 2009. One of the most recent reports on the FCC website regarding minority owned media (which carries a disclaimer) is produced by Duke University in 2007 and lambastes the FCC for its stagnant approach and rudimentary processes in monitoring the media industry, as well as the agency's virtual refusal to produce accurate data and timely reports.

A cursory look at the American economic landscape reveals a paltry amount of progress has been made since Dr. Martin Luther King offered us the "Urgency of Now" message in a historic speech in 1963. 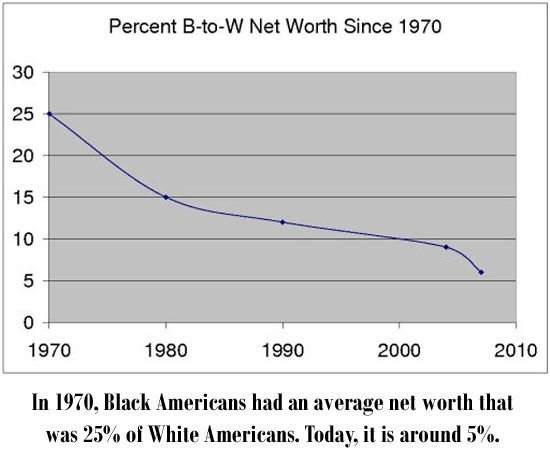 Chart taken from Knol: The U.S. Black/White Net Worth Gap

After 47 years of continued struggle, Blacks have eked out a 1 percent ownership in media, 1 percent of business ownership across industry sectors, and less than 1 percent contribution to America's overall GDP. To add to the struggle, a new report from the California Reinvestment Coalition reveals an 81 percent drop in access to Small Business Administration capital for Black business owners in 2011. The SBA is designed to fill in the gaps for small business owners who cannot secure lending from banks and other financial institutions. In other words, for many Black-owned small businesses, the SBA is the life-saving lender. The solemn news from California is that door is nearly shut.

When Johnson sought a loan to introduce Ebony onto the media landscape, he was turned away by all lenders. After years of enormous success, he sought to build a headquarters in Chicago's business district. Again lenders closed the door. The CRC report from December 2010 reveals the inability for Blacks to access sufficient capital is still a giant roadblock sitting in the path of entrepreneurs across industry sectors.

Oprah's success in the face of America's economic depression is enormous. A 9 percent U.S. unemployment rate overall translates into 16 percent in Black America. The mortgage crisis, created and controlled by White financial and government institutions, wreaks holy havoc among Blacks, many of whom were the deliberate targets of predatory lenders in the aftermath of the nation's financial civil war (Bush Administration battled all 50 states' attorneys general). The White-dominated broadcast media industry, along with other business sectors, has laid off tens of thousands of journalists, an unhealthy percentage of whom are minorities.

Still, even in the worst of times, we love to celebrate successes. And we should. The nation felt proud of itself when the first Black president was elected in 2008 against enormous odds. And the Oprah Winfrey Network, which barely avoided catastrophe, launched this year against incredible odds.

The one thing that doesn't seem to change, as we celebrate the anomalies, is the enormous odds. Such odds are created and maintained by those who control institutions.

The term "institutionalized racism" is often received with knee-jerk emotional reactions by many White Americans who fervently believe they would never willingly participate in deliberately undermining the progress of racial minorities and erecting monumental barriers to prevent their success. It is equally unfathomable to millions of White Americans that they live in a nation in which there are entire institutions, laws, rules, policies and rote behavior within industries and government that deliberately discriminate against Blacks and other minorities. For most White Americans, the Civil Rights era put an end to an ugly racist history that needs to be forgotten. And, with the exception of Dr. Martin Luther King's famous "I have a Dream" speech, it has.

The problem with such thinking is that it ignores the fact that the Civil Rights Movement was the beginning -- not the end -- of a national acknowledgment of institutionalized racism, rampant discriminatory practices and systems of neglect and deliberate hostility that targeted powerless people and sabotaged their progress.

The Civil Rights era was the beginning of a national understanding, and the beginning of a national movement to overcome the inertia of ignorance and unravel the intricate web of White "democracy" that excluded full participation by non-Whites. Ironically, the Civil Rights Movement could not have occurred until White America was adequately informed of the struggles experienced by Blacks.

Important information was eventually disseminated by White-owned national and local media -- the same media that had ignored the same struggles for many years while Black-owned media recorded the sad sordid history.

Conversely, when White-owned media stopped shining its spotlight upon the people and institutions that continued to hold Blacks and other minorities in contempt, the progress that caused Congress to write protective laws in 1964 and '65 rapidly diminished. 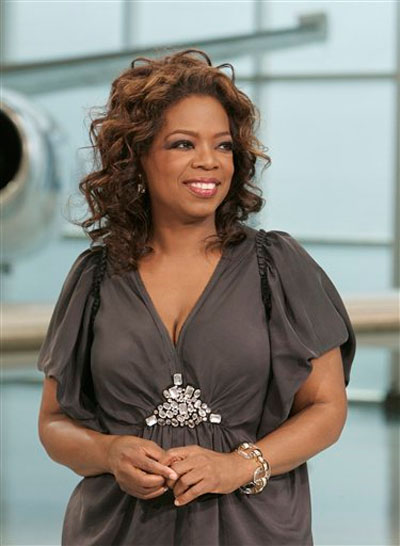 Today, American media highlights and celebrates Oprah's historic launch of the Oprah Winfrey Network. We all celebrate her success together; and rightfully so, given Oprah has been a unifying positive force in America for a long time. But for some of us, the celebration has deeper meaning.

In like manner to the tear-filled celebration that spread across America and the world when President Barack Obama was inaugurated, Oprah's success (albeit less world-shaking) signals yet another crack in the foundation of institutionalized racism in America. That, too, is cause for celebration.

The challenge is to someday reach a point where the achievement by non-Whites isn't "against all odds." On that day we will celebrate success of another winner in the competitive game of capitalism, rather than the first anomaly to defeat a rigged system.