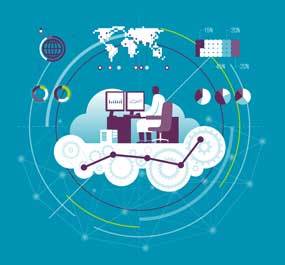 Some call it the Eureka Moment. Oprah calls it the Aha Moment. Whatever you call it, you'll know it when it happens. It is that moment when, after pondering a dilemma, the solution appears clear and in focus.

Our very name, Bluedrop, means: An area of open sea water in an ice field, providing clarity. (Bluedrop) But on our path over the past 18 years working in the elearning industry, the way forward has not always been clear.

Several years ago, Bluedrop was serving some of the most successful companies in the world. Our propaganda message went something like this:"In seven different industries, we have the world leaders as our clients."

One might think the path ahead was clear, if not obvious--keep milking the cow. But something didn't feel right for a company that prided itself on being a trailblazer. We ultimately decided to let go of all our lucrative clients and start over. People thought that was crazy, but like so much in life, doing the right thing sometimes comes in a moment of penetrating clarity. Ignoring the moment is like ignoring the cries of a newborn baby - it just wasn't an option.

Our Aha Moment came in 2008 at a bidders' meeting for multinationals to train tens of thousands of their employees. I looked around and suddenly realized that this client (and almost all of our multi-national clients) didn't really need Bluedrop anymore. It hit me hard that the people who really needed us were not in that room.

After many years of pioneering work, I realized we were no longer alone out there. There were numerous excellent vendors helping multinationals up-skill their employees and improve productivity. Corporate Learning Management Systems were becoming almost a religion in developed economies. We finally had reached the tipping point where American CEOs began to take seriously and act on their past lip service about employees being their biggest asset. They had no choice; if their people could not out-innovate, out-service and out-compete with workers in lower cost centers, their businesses would fold or relocate to lower cost centers. That awareness created a gold rush in the elearning industry; with a projected global revenue growth of over 30% in just five years from $35.6 billion in 2011 to $51.5 billion in 2016.

But that same gold rush was creating a divide, a world of digital learning haves and have-nots. The people left behind were individuals in small companies, the worker in a micro-business, the unemployed or under-employed, the person desperately in need of a skills upgrade and caught in the loop of limited access and limited ability to advance. Many were disadvantaged. And, despite billions of dollars spent by governments, industry groups, foundations and unions, many were being left behind.

We looked at the anxiety building in the system from just trying to keep up skills with the pace of change. We realized that proven technology solutions used by multinationals were almost science fiction for these folks. While it would have been lucrative to stay in the gold rush of multinational corporations, we believed this divide presented a massive business opportunity. More importantly, we thought this was the right thing to do.

So, goodbye multinationals and hello to the world of the have-nots.

Interestingly, Mark Zuckerberg, the founder of Facebook, said he doesn't believe in Aha Moments. Rather, Zuckerberg sees breakthroughs as a series of dots that get connected over time. On this I tend to agree.

I discovered quickly, and sadly, there was a reason we would have the unemployed, disadvantaged and those left behind almost all to ourselves. It was very difficult to create a scalable business model to address this audience. We found that you couldn't go directly to them. We discovered that learning is not viral. It is like eating well or exercising - it is something we all know we should do, but put off over and over again.

So, the hard work of connecting the dots began. We looked at all the players who work with those left behind. We learned about the challenges of navigating between federal, state and local governments, industry associations, unions, socially responsible corporations, and NGOs. Collectively they focused on deploying billions of dollars in resources to help the difficult to reach have-nots. We could help make that connection.

After a few years of study and trial and error, we realized that the Return on Investment to economies is staggering in terms of helping these groups. We found that pace of change meant the system was starving for just-in-time, adaptive, self-driven learning efficiencies. In short, the system needs a revolution of process and approach that leverages some of the same technologies and approaches used by multinationals.

We found that credentials are now a lifelong journey versus a destination. We found that employers have been saying the same thing for decades about the need for improved soft skills (we call them workplace productivity skills) such as communication, teamwork, supervisory skills etc. That is the opportunity and those are the dots that must be connected.

Globally, we are experiencing a massive workplace learning revolution, experiencing some of the most profound changes in the way people work and learn since the Industrial Revolution. We can't afford another have / have-not divide.

So, it seems that in the world of workforce evolution, there is a role for both Oprah and Zuckerberg. I am glad we had our Aha Moment, and I hope the hard work of listening will connect the dots to help the millions who have been left behind.