After more than 20 years of friendship, Oprah and her favorite health expert, Bob Greene, are taking their love of nourishing foods back to its roots -- by rolling up their sleeves, tilling the soil and sharing one heck of a beautiful bounty.

It's a long way from Mississippi to Maui. I never thought my life's journey would bring me such a great distance -- physically, emotionally, spiritually and everything in between. But being on Maui and creating a farm feels like coming home.

I was raised on a tiny farm in Kosciusko, Mississippi, by my grandmother, and she grew everything. Never went to town for food. Other than baking powder, baking soda, and maybe some yeast, we bought nothing. If you needed medical remedies, you'd go out and gather some roots and pinecones. I remember her making me pinecone tea when I had a cold.

When I was about 6 years old, my grandmother finally trusted me enough to let me collect the eggs in the morning. I'd reach under the chickens to get them, and they'd still be warm. And the very first time someone brought me eggs from our chickens here on Maui, I had a sense memory, because they brought them in a little basket just like the one I used all those years ago.

One of my strongest memories is being on the back porch helping my grandmother churn butter. We churned the butter, we milked the cows, we killed the hogs, we cured the meat in the smokehouse. Above all, we tended our little garden. That's where most of what we ate came from. And now I've returned to that way of living: We eat what's from the garden. (It turns out you can even make drinks from the garden if you add a little vodka! We're not making our own vodka yet, but we're growing a lot of potatoes, so stay tuned.)

When I bought this property several years ago, I knew it had been farmland in the past, but I didn't seriously imagine continuing that tradition. Then one day my friend Bob Greene said, "What if we give back to the land -- and find a way to give back to Maui?" His point was that about 90 percent of the food on the island is flown or shipped in from outside, which makes it very expensive to buy -- not to mention the carbon footprint involved in getting it here. We realized if we could grow delicious food ourselves, we could share it.

So we designated 16 acres for farming, and last summer, with the help of a brilliant natural-resource-management group called Bio-Logical Capital, we planted a single acre with more than 100 species of fruits, vegetables and herbs. The plot is in the shape of a half-moon -- that's how it had been set up by the previous owners, and we followed their lines. I think of it as our own fertile crescent!

One reason we planted so many different crops was to see which ones would thrive (beets, leafy greens, and beans are just some of the champs so far). The other reason: The greater the diversity of crops, the richer the mix of nutrients that can wind up in the soil. This is the part that really thrills Bob; for years he's argued that many of our modern-day health issues stem from the fact that so much of the food we eat lacks the nutrients it used to have -- in part because it's grown in soil that's depleted from pesticides and overfarming. As a result, he says, our bodies may end up feeling starved for nutrients, which Bob believes is the big reason so many of us overeat. We know we're hungry for something, but we eat the wrong things. And when we do bring home a bag of produce from the store, it's almost flavorless. No wonder we're not more excited about eating vegetables!

Here on Maui, our soil is now so good and so rich that we're already producing 145 pounds of food each week. And everything grows five times as big as you'd expect. We can grow tomatoes all year long, and they taste like real tomatoes. We're still figuring out the best way to make use of our bounty, but for now I walk down the road with bags of lettuce, going, "Hi, would you like some lettuce?" I grew it! I feel like I can't waste it.

In the same way that good soil produces a good crop, a good friendship can bring about something wonderful. Bob and I have known each other since 1992. That's the year I was struggling with my weight so much that I hoped Phil Donahue would win the Emmy and spare me the embarrassment of hauling myself out of my chair in front of everyone to accept the award. No such luck.

Not long after that night, I reached out to Bob, who taught me to treat my body -- and the food I put into it -- with respect. Now the farm is giving us a chance to show that same respect to this beautiful land.

I've come to see the process of growing things as a metaphor for living. In life, as on a farm or in a garden, we get out of it what we put into it. Whatever our dreams, ideas, or projects, we plant a seed, nurture it -- and then reap the fruits of our labors. That lesson was there for the taking way back in Mississippi. But I needed 50 years, thousands of miles, Bob's great example, and a whole lot of big, beautiful tomatoes to really learn it for myself.

How Oprah's Growing Healthier -- And You Can Too
Oprah's Farm 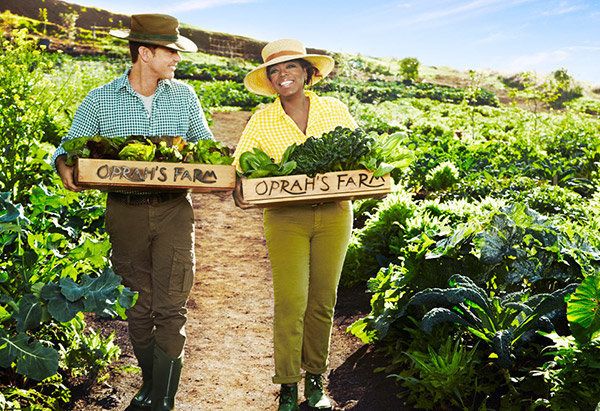 1 / 7
After more than 20 years of friendship, Oprah and her favorite health expert, <a href="http://www.oprah.com/packages/the-best-of-bob-greene.html" target="blank">Bob Greene</a>, are taking their love of nourishing foods back to its roots -- by rolling up their sleeves, tilling the soil, and sharing one heck of a beautiful bounty.
Photo: Chris Craymer