Thanks to two innovative neuroscientists, you don't have to undergo an electroencephalogram to see your brain activity. As part of a study published this month in the Journal of Neuroscience, researchers in France created a new optical illusion to show viewers their brain waves.

The flickering wheel is a relatively simple illusion. Viewers focus on the black-and-white striped wheel and perceive a visual vibration at the center. (Try it out yourself. If you don't see a strobe-like flash emanating from the center, try focusing on another spot on the screen, so the wheel is in your peripheral vision.) 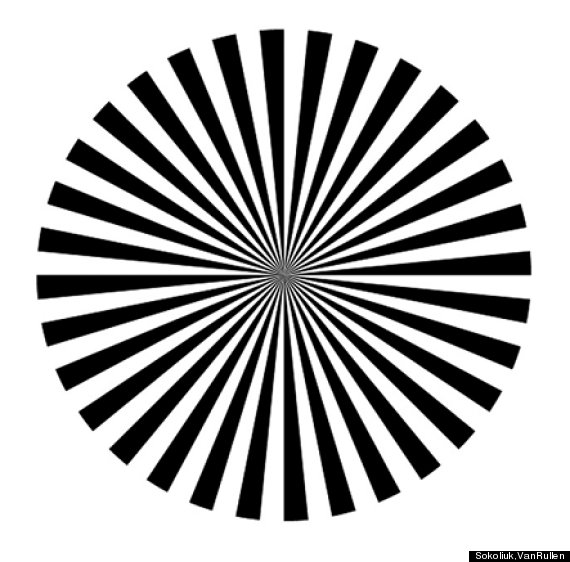 As the authors explain in the published research, this slight flicker reflects the brain's alpha waves, which are present primarily during periods of deep relaxation.

Researchers monitored the frequency of flickers subjects perceived when they stared at the static wheel and compared that with each individual's alpha waves in resting state (with no visual stimulation), finding that the correlation between the two was significant.

While the neuroscientists concluded that looking at the flickering wheel -- and its afterimage -- allows viewers to experience their alpha activity, they did not specify whether the flicker is actually an alpha wave. As Discovery News writes, "[T]hey haven’t yet shown a ‘smoking gun’ which proves that the flicker really is alpha, as opposed to being something that happens to provoke alpha, and be of roughly alpha frequency."

These Are Not GIFs