A light-colored object on a dark background appears larger than a dark object on a light background, but until recently, no one knew why.

The distorted response to light might even hint at why reading in dim lighting may be bad for your eyes, the researchers said. [Eye Tricks: Gallery of Visual Illusions]

"Every time we think about blur in an image, we usually think about optics," said Dr. Jose-Manuel Alonso, a neuroscientist at the State University of New York's College of Optometry and leader of the study detailed today (Feb. 10) in the journal Proceedings of the National Academy of Sciences. "But what we're seeing is, there is another component — the neurons themselves," Alonso told Live Science.

When the Italian astronomer Galileo was making his observations of the planets, he noticed something strange. With the naked eye, the brighter of the two planets Venus appeared larger than Jupiter, but when viewed through a telescope, Jupiter was clearly larger.

Galileo believed the lens of the human eye caused this so-called "irradiation illusion." But the German physicist Hermann von Helmholtz showed that if the optics of the human eye were to blame, dark objects should be distorted just as much as light ones, which they were not. 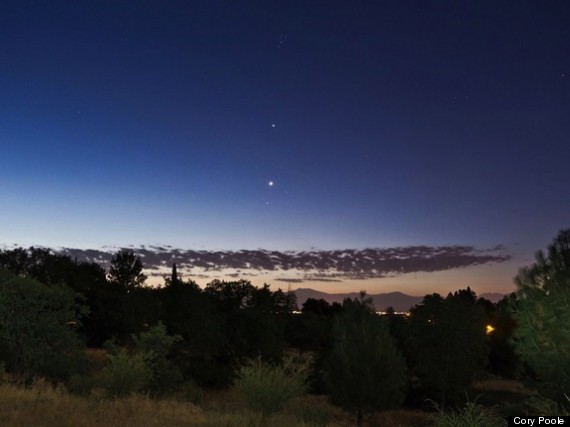 The distortion of light-sensitive neurons finally provides an answer to Galileo's puzzle. Venus, a light object on a dark background, appears disproportionately larger than Jupiter, a more distant, and thus darker, object.

Light in the night

The distorted vision turns out to very useful for humans, Alonso said, "because when you're in a very dark place, it allows you to see small amounts of light." This would be helpful to, say, alert you to predators at night. But during the day, more dark objects are visible, so it's better that these aren't distorted, Alonso said.

The study's results suggest the distortion may actually occur at the level of photoreceptors, the light-sensitive cells in the eye itself, rather than deeper in the brain. (This contrasts with Galileo's view that the lens of the eye was somehow to blame for the illusion.)

Having a stronger response to light than dark may be important when a baby's vision is developing. During the first few weeks after a baby is born, its vision is blurry, which could result in the light-dark distortion.

The findings could also open new windows into understanding problems with vision. Scientists believe that blur causes conditions such as myopia, or shortsightedness. "We now think 'neuronal blur' could be important part of this story," Alonso said.

Neuronal blur might even support the notion that reading in low light is bad for a person's eyes, though that subject remains for another study.