Imagine... as you wake later than usual rolling over towards the window, you notice that it's a gorgeous day outside. Warm, yellow sunlight shines in through glass illuminating floating "dust angles." On the other side of the glass, past the oak tree with yellowing leaves, you see a brilliant blue sky. For the first time it occurs to you that a blue sky is a contradiction: the sky at night is devoid of color, so why during the day does the world seem to be shrouded in a blanket of blue? Years previously as a child full of questions you asked your parents, but the answer they offered seemed somehow inadequate at the time... less than magical. And so the question remains... as it does the most of us.

The answer is this: The sky isn't actually colored at all (not blue or yellow or red or green). Rather, it's your mind that's colored. The world around us is physics devoid of meaning, whereas our perception of the world is meaning devoid of physics. In terms of physics, the light in the sky is heavily biased towards smaller wavelengths (around 450 nanometers). This is because the air itself scatters smaller wavelengths of light more than it does larger ones. Which means the air in the sky is like a filter, letting primarily medium to long wavelengths through more easily than short wavelengths. Hence why the sky is composed primarily of shorter wavelengths (and so appears bluish), whereas the light from sun is composed primarily of longer wavelengths (and so appears more reddish). While the differential scattering of sunlight by the air explains the non-uniform distribution of wavelengths across the sky, it doesn't explain why shorter wavelengths are seen as blue and the longer ones as red.

The sky isn't actually colored at all (not blue or yellow or red or green). Rather, it's your mind that's colored. The world around us is physics devoid of meaning, whereas our perception of the world is meaning devoid of physics. -- Beau Lotto

And yet color is the simplest sensations the brain has. What may surprise you is that even at this most basic level we never see the light that falls onto our eyes or even the real-world source of that light. Rather, neuroscience research tells us that we only ever see what proved useful to see in the past. Illusions are a simple but powerful example of this point. Like all our perceptions, we see illusions because the brain evolved not to see the retinal image, but to resolve the inherent 'meaninglessness' of that image by continually redefining normality, a normality that is necessarily grounded in relationships, history and ecology. Which is why we innately find regularities in information and reflexively imbue those regularities with value. But it is the value, not the information itself we see. So, tomorrow morning when you open your eyes and look "out into" the world, don't be fooled. You're in fact looking in. You're not seeing the world covered in a blue blanket at all; you're seeing a world... an internal map of value-relations derived from interactions within a particular, narrow context.

Another essential point about illusions implied in my TEDTalk is that they reveal our amazing capacity to entertain mutually exclusive internal realities simultaneously. For instance, while looking at one of my color illusions (say the multi-colored cube) you're aware of one reality: that two tiles look very different, while simultaneously being aware of an opposite reality: that the two tiles are in fact physically the same. This capacity to be an observer of yourself is phenomenal -- and possibly unique to humans. Indeed, to literally "see yourself see" is in my view the principle act of consciousness, which has the power to transform one's view of the world and of oneself. 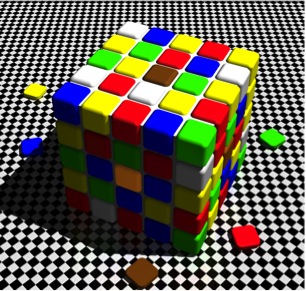 The central squares on the upper and lower surfaces of this cube appear very different in color: Brown on the top and bright orange on the bottom. Scroll to the very end to reveal their 'true' physical similarity. Photo and caption by: R. Beau Lotto

The importance of these observations transcends neuroscience. They show us in an explicit (and I hope engaging) way that our senses are not "fragile" -- as many would have you believe. They show us instead that we are not outside observers of nature defined in isolation. We are instead indivisible from nature, defined by the trial and error process of interaction, a process in which we can choose to become active agents (but too often choose not to). Understanding this point is I believe critical to personal and social wellbeing, since the typical barrier to a deeper insight into oneself and others is the overriding, but necessarily false impression that what "I" see, what "I" hear and what "I" know is the world as it really is. But, by "seeing yourself see," in other words by actively exploring how your thoughts, feelings, beliefs and even the colors you see reflect your physical, social and cultural ecology, only then is it possible to understand the source of coherence and conflict within and between individuals. Put another way, only by accepting my own humanity can I accept the humanity of others. "Seeing myself see" creates the opportunity for this acceptance. Illusions, then, were not the point of my talk, but simply a tool for encouraging this process.

Resolving uncertainty is essential to our survival. Hence our fear of ambiguous situations is palpable -- e.g., the inability to resolve sensory conflict between the eyes and ears can result in nausea (like sea sickness). And yet it is only by embracing the unknown within education, science, art and most importantly within our own private lives will we find new routes to more enlightened ways of seeing and being. Thus, courage not confidence is at the heart of this process of actively redefining normality, which is the route to compassion and creativity. Encouraging this process by celebrating uncertainty is the raison d'etre of my work. 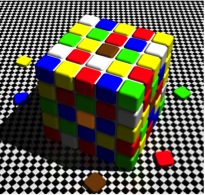 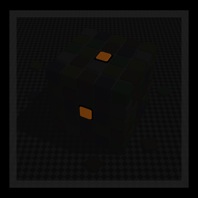