Finding the correct school for your kid is an important job -- one that takes time, and often, a lot of research.

When parents in Boston set out to find the best public schools for their kids, they're not only confronted with a challenging task -- make sense of detailed eligibility criteria and then navigate the complicated school selection process -- but find the necessary information nestled in a 28-page parent handbook. It's dense. It's difficult to read. It's frustrating.

Last year, Code for America built an application to streamline the school discovery process by allowing parents to enter a home address and grade level and then view their child's eligible schools on a map. We call the project DiscoverBPS (BPS stands for Boston Public Schools).

By moving the eligibility criteria into the application's source code, DiscoverBPS allows parents to focus on what's important to them: the options for their child's education -- and no longer spend hours figuring out where their child is even eligible. It improves the user-interface to government and makes government more efficient.

But the project accomplishes something else.

At the heart of Boston's school admissions process is the concept of the "walk zone." A walk zone is a variably sized area that determines which schools a student can reasonably walk to from his or her house. By setting aside 50 percent of each school's seats for students with walk zone status, the school department encourages parents to send their kids to neighborhood schools.

The concept is great in theory, but difficult to administer: defining walk zone eligibility means measuring the distance from each of Boston's 125 public schools to -- potentially -- every address in the city. To make matters worse, the walk distance varies from one mile for elementary students to one and a half miles for middle school students, and two miles for high school students. Due to the difficulty of the calculation, the School Department resorted to grouping address ranges into zones and pre-calculating the eligible schools for each zone. This makes the policy easier to administer, but leads to opaque admissions procedures and inaccurate results.

DiscoverBPS uses a home address and grade level to generate a personalized list of schools, and uses an open-source tool called pgRouting to display the student's walk zone (also known as a "walkshed") on a map. This gives parents a transparent view of their options, and gave the School Department its first accurate representation of the walk zone policy. 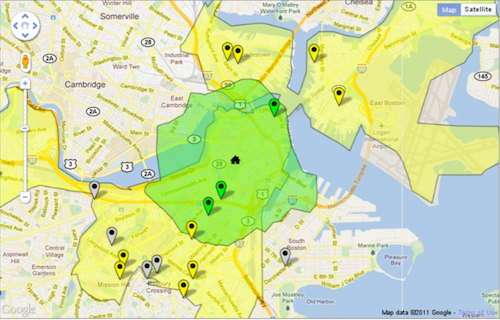 So what is the significance of this improvement? First of all, the school department had a great idea; one that promised to strengthen neighborhood communities and reduce school bus transportation costs. Without an appropriate mode of measurement, however, they were unable to accurately implement the policy. It wasn't until DiscoverBPS -- with its advanced routing and mapping technologies -- that the policy became truly viable. Policies, like laws, are effective only if they're enforceable, and enforcement relies on the ability to measure, to quantify.

Take speed limits: In 1865, the United Kingdom passed the "Locomotives on Highways Act" to control the new, steam-powered, road vehicles (precursors to the automobile). The law set the speed limit at two miles per hour in towns and four miles per hour in the country, but also required that a man with a red flag walk 60 yards ahead of each vehicle. This made the speed limits redundant, since the vehicles were limited to the pace of a pedestrian. When the speed limit was increased to 14 miles per hour in 1896, and a flagger was no longer viable, the police had to implement complex signaling and timing systems -- speed traps -- to enforce the law.

Citizens complained that the speed traps were error-prone, and were used to generate revenues for towns; new technologies eventually emerged that offered more accurate modes of measurement and more verifiable forms of evidence. (Laser guns and speed cameras are the modern-day equivalents.) It's not without reason, then, that Lady Justice holds a scale: The law relies on measurement and measurement is facilitated by technology.

Furthermore, when the mode of measurement becomes dynamic, the law itself is transformed. DiscoverBPS turns a few lines of policy into an infinitely variable rule: a student's walk zone is like a fingerprint -- its shape and size vary according to the student's age and location. Or to return to speed limits: the M25 highway in England uses radar guns, video cameras, and magnetic sensors -- not simply to catch speeding motorists, but to dynamically adjust speed limit signs in response to changing driving conditions. The system can measure the shockwave from an accident, for example, and automatically reduce upstream speed limits to prevent an accordion effect of stop-and-go traffic. A law that was once static -- a stationary speed limit sign -- is transformed into something dynamic and adaptive. And to what end? To improve overall throughput and safety on the highway, i.e. to automatically advance the common good. Tim O'Reilly refers to this as "algorithmic regulation." 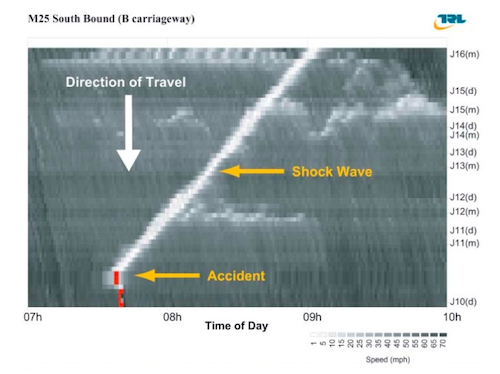 The graph shows a slow-down caused by an accident as it ripples upstream over a period of 1.5 hours.


Thinking back on my year at Code for America, I've come to see the walkshed as a kind of symbol for our work. It shows how advanced technologies can transform not only the interface to government, but perhaps even the rules of government themselves. And this is one of the most intriguing parts of Code for America's mission: to expose policy-makers to the tools and technologies of the Internet as a way of prompting them to think more creatively about the law.
As society confronts new and unique challenges, we will need new forms of measurement to
adequately frame our goals.

It's time to show what's possible when technologists use their skills not just to optimize click-throughs, but to enhance the machinery of civil society; to further the common good.