How many times and in how many ways can a person try to warn about disaster ahead?! Cassandra is just a real tiresome role. (The last time I tried to warn about an unjustified, counterproductive war, for instance, was in February 2003 which resulted in loss of my 13 year legal job, including my GS-14 grade level, and corresponding cut in my FBI pension as well as a heap of scorn. The sacrifice was all for naught as my warnings--during that period of intense war fever--despite making the front page of the NY Times and a couple other newspapers, just ended up on 60 Minutes' cutting room floor.) But after having a front row seat for seeing the worst happen--the 9-11 terrorist attacks and then the Bush Administration's exploitation of 9-11--quadrupling worldwide terrorism and wasting 2.4 trillion dollars and over a million lives thus far, I remain ethically compelled to keep trying.

So here's my newest way! So far it's proven safe, legal and pretty effective. 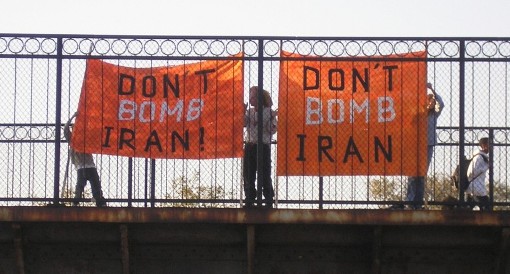 Our synchronized and fluorescent orange "Don't Bomb Iran!" banners displayed on about 15 pedestrian overpasses scattered strategically throughout the Twin Cities metro and as far south as Rochester caught a lot of people's attention! We perhaps didn't reach the corporate MSM but we think we reached between 100,000 and 200,000 regular MSM (Main Stream Motorists). We certainly reached more people than a $10,000 newspaper ad--all in a couple hours and without any Minnesotans' public safety being endangered. 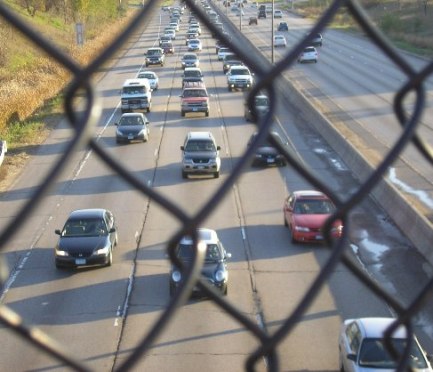 Unfortunately, the Bush Administration continues to beat its drums ever harder for a pre-emptive bombing of Iran, in a nightmarish repeat of the same deceptive tactics they used to launch their misbegotten war on Iraq. Retired intelligence colleagues think we may only have a few weeks right now to try to effect warnings of how catastrophic it will be for Bush-Cheney to start their third war in six years. (See "Inexorable March Toward War With Iran?" By Joseph Galloway.)

So as long as the threat to launch "World War IV" (term coined by Norman Podhoretz, one of Bush-Cheney's advisors) exists, we will carry our banner efforts forward to warn our fellow citizens. It won't be as synchronized as the first time but our "Women Against Military Madness" and other peace groups are helping organize as few as 2 or 3 people per overpass--needed to hold both sides of each banner--to mount continuing displays for an hour or two each week. Rush hour times are good but anytime works as most highways get at least 4000 cars per hour all day long. Certainly public safety must come first by not attempting bannering except on fully fenced (at least 10 feet high chain link fence)--or the ideal, fully-enclosed pedestrian overpasses--to avoid the potential for any sign or banner to blow down into traffic. 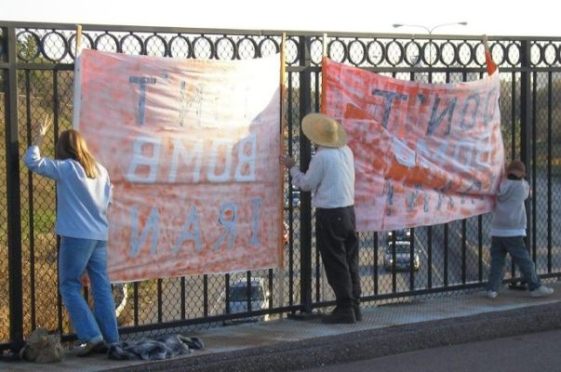 In addition to horn honks from scads of cars crawling home on 35E north of St. Paul, this group (on the Gateway bike trail overpass) received support from a peace enthusiast who stopped and gave them free pizza and pop! My poor husband Ross, on the other hand, on a different pedestrian overpass in St. Paul, got harassed but NOT ARRESTED by Minnesota Highway Patrol. He held his ground asking for their names, badge numbers and to cite the law or ordinance for which he was being potentially arrested. That was where the Minnesota Supreme Court case law favoring first amendment rights apparently turned out to be a glitch for the officers. So they backed off and decided, instead, to just glower at Ross's little group. The police did force another banner off a pedestrian overpass in Edina which incident we are evaluating for potential injunctive action, but law enforcement, as far as we know, left the rest of our overpass groups alone. I haven't researched all 50 states but I think Minnesota's Supreme Court decision in July of this year (Minnesota vs Otterstad and Rudnick) provides exceptionally good legal precedent for this type of "freeway blogging." Although it's true the message "Don't Bomb Iran" is itself a scary one (click here to see just how scary), the Constitution prohibits discrimination based on content of message.

Here's the best thing. Better than the free pizza. On the way home, Ross had Twin Cities "Mr. Right" Jason Lewis (that's the actual nickname he goes by on his billboard ads) tuned in on the radio. One of Lewis' right-wing listeners called in while driving and said, in a very alarmed way: "Jason, there are signs all over the Twin Cities' metro, huge 10 x 10 orange ones, that look like construction signs that say "Don't Bomb Iran!" "Mr. Right" Radio was able to turn the conversation quickly to what a bad place Iran is and why we need to subscribe to Bush's plan to bomb it but the orange warnings obviously flustered them both. It was evidence that our signs had worked. In fact we conservatively estimate, after several countings, at least 6,000 to 10,000 cars per hour rolled under each location. Since we had about 15 locations in the Twin Cities metro and Rochester bannered up, that's well over 100,000 MSM that we reached! If you add passengers, it could be double that number. And all for about $500 worth of orange paint and a couple days' work.

So perhaps we've hit upon a good idea to cut through the bystander apathy that is the root problem of all the congressional spinelessness. Raising taxes to pay for Bush's misbegotten wars and/or instituting a military draft to fight Bush's wars would probably work better than orange colored warnings--and those things ARE going to happen, it's just a question of time if we can't get people to understand soon what's going on. By then, however, it'll be too late. Our little delusional "war president" clearly knows how to start wars--he just doesn't know how to end them.

So Cassandra always tries. With perfected stenciling techniques which we ran assembly-line fashion to mass produce 40 of the banners this last pre-Halloween weekend, we've at least found an effective way for average people to wake up their fellow citizens and do something to fight this war president's insanity.