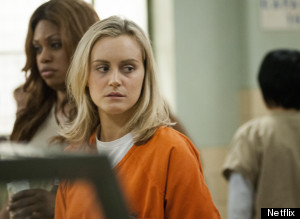 There was some grumbling when "Orange Is the New Black," a prison drama that debuts on Netflix Thursday, was renewed for a second season before the first had even appeared.

I couldn't happier about the early renewal. "Orange" is one of the best new programs of the year, and the six episodes I've seen have left me hungry to see more.

Creator Jenji Kohan hasn't just given us an intriguingly compromised lead character, she's also created an entire world, an alternately sly and sad pressure cooker that offers an enticing range of complicated relationships and unstable power dynamics. But what may be most impressive is the fact that Kohan and her writers have fun with a whole array of "Women in Prison" tropes while allowing many of the central characters to have dignity, depth and even moments of pathos. This mixture of melodrama, subversive comedy and drama could have been a big ol' mess, but "Orange" ends up a rich, flavorful stew.

In other words, "Orange" is the first Netflix original series that I'm seriously excited about. It doesn't have the big names of "House of Cards" or the name recognition of "Arrested Development," but it has vision and verve. It fits in well with the trend I've been calling "B-Movie TV": Like a host of other recent shows found online or on smaller networks, "Orange" is a scrappy, entertaining, low-budget program that doesn't try to be a Serious Drama, but instead uses the cover of a well-known genre to explore bracing and challenging places.

The center of "Orange's" prison saga is Piper Chapman (Taylor Schilling), an engaged yuppie whose life is turned upside-down by a criminal conviction. Something that Chapman did in her past comes back to haunt her, and before she knows it, she's gone from a Whole Foods-and-"Mad Men" lifestyle to a bunk in a federal prison. To say she is a fish out of water is putting it mildly.

The show certainly gets plenty of mileage out of Chapman's ongoing adjustment to prison culture, and Schilling plays her confusion and well-intentioned cluelessness with admirable resolve. Chapman desperately attempts to hang on to her old life -- during one phone conversation, she makes her fiancee (Jason Biggs) describe the groceries he's just bought, and she tries to keep managing the artisanal soap business she started with her best friend (fellow inmates are unimpressed by the fact that her products are sold at Barney's).

But the realization that her efforts to cling to her old life are doomed dawns on her slowly through her first few weeks in a federal pen. In order to fit into her new environment, Chapman has to get her head in the game; she has to stop thinking like a privileged, organic-produce-eating urbanite and create a cagier, tougher identity. But doing that creates a gulf between the new inmate and her friends and family, one that only grows during brief visits and phone calls (the show doesn't call attention to this running gag, but every single time Piper calls home, a woman on the next phone is crying).

It's a useful starting point for the show, but if "Orange" had focused too tightly on Chapman's story, it probably would have felt too claustrophobic (always a danger for prison-set shows). Kohan instead has given herself plenty of other directions in which to go by making the show a true ensemble piece: "Orange" explores the lives and connections of a whole host of prisoners, and flashbacks offer insight into how each of their lives ended up going off the rails. If I have one issue with "Orange," it's that these flashbacks could be even longer and meatier; the glimpses into the women's past lives are too tantalizingly brief in some cases.

Where "Orange" sometimes wobbles is in its structure: Episodes of "Weeds," which Kohan also created, clocked in at under half an hour, and at times "Orange" episodes feel like two half-hour segments mushed together. It's not bad that storytellers are playing around with the idea of what an episode actually is, given the possibilities of all these new delivery systems, but sometimes that feels like an excuse to meander. And some characters veer into caricature, most notably Taryn Manning's Southern inmate and Piper's WASP mom, played by Deborah Rush (who appeared as an identical character a few months ago on "Girls").

Still, given that most of "Orange's" running time is spent thoughtfully and wittily illuminating the lives of women whom most of society has rejected, the show's occasional lack of nuance and a mild tendency to sprawl are minor complaints. It's far easier to think of things to praise: Laura Prepon and Natasha Lyonne give terrific performances as fellow inmates (the charismatic Lyonne owns every scene she's in, and I could easily see "Orange" morphing into a vehicle for her cynical, bruised character). Kate Mulgrew gives wary, weary solidity to the role of the powerful Russian inmate who runs the kitchen, and Pablo Schrieber, Matt McGorry and Michael J. Harney are wonderful in very distinct ways as three very different guards.

It is mind-boggling that so many disparate things hang together so well in "Orange," which manages to be both subversive and serious, sweet and viciously barbed. There's a guard-inmate romance that's so tender it's nearly "Everwood Behind Bars." There's a lunatic inmate named Crazy Eyes who more than lives up to her name, and on the other end of the subtlety spectrum, Laverne Cox gives an amazing performance as trans inmate, Sophia. Scenes of Sophia's pre-surgery life as a man whose wife is struggling with his choices are among the most moving on-screen moments I've seen all year.

"Orange" features the usual array of fights, thefts, betrayals, mess-hall showdowns, odd couples, comedic complications and dangerous crises you'd expect from any prison drama, and like "Oz" before it, "Orange" treats matters of race with astonishing frankness. Several characters also have a fluid sexuality that is barely remarked upon (it's assumed that every woman's rating on the Kinsey scale is flexible once she is in prison -- or quite possibly before that). There's something refreshing about a show that delves headfirst into matters that other dramas reserve for Special Episodes or porn-tastic sidebars.

Ultimately, it's easy to envision an "Orange" in which Chapman's story is just one of many jockeying for space and attention. Given its setting, perhaps it's unsurprising that the rest of the ensemble basically steals "Orange" out from under the new girl.

Not for long, maybe. She's learning.

"Orange Is The New Black" premieres on Netflix on July 11.

Notes: My HuffPost TV colleague Chris Jancelewicz offered his own take on "Orange," and watch this space for Chris' interviews with the show's cast. Piper Kerman, whose real-life experiences were chronicled in the book that inspired the Netflix show, was recently interviewed about "Orange" by HuffPost Live.

Finally, Ryan McGee and I discussed FX's "The Bridge" and "Orange Is the New Black" on this week's Talking TV with Ryan and Ryan podcast, which is here, on iTunes and below. The podcast now also has its two different Bingo cards.