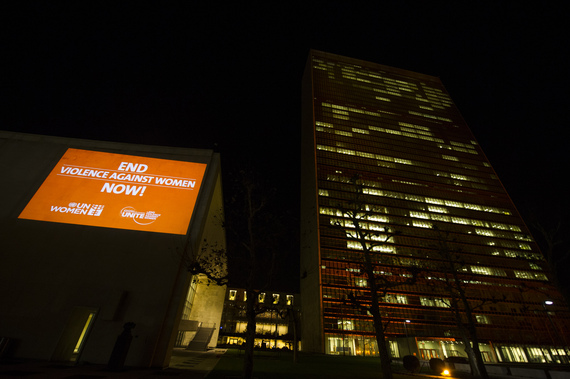 At dinner, I witnessed a man at a table near mine, speaking to his wife in an increasingly aggressive manner, with their young daughter looking on. His wife sat motionless, and the young daughter was expressionless as she stared at her father. The man berated her continuously, culminating in the threat, "I will beat you all over."

A terrifying silence filled the room. The daughter turned to look at her mother, whilst her father stroked her tiny hand. The threat hung in the air for several moments, when the mother rose to her feet and took her child to the ladies' room. I immediately rose from my table and followed her. I was not the only diner who was concerned, as another lady was in the room asking if the woman was ok. To which, the woman answered, "yes, I will be fine." Her young daughter, clearly concerned, interrupted with "but how do you know you'll be fine?"

Comforting her child, by saying, "Daddy is just jealous, don't worry...men get jealous sometimes," her body language denoted a certain stiffness and submission. Quietly, I slipped my card into her hand. She looked at it, thanked me, and returned to her table. Some minutes later, the young family left the restaurant.

Since that night, I have felt uneasy, asking myself the same questions over and over again. What is an ordinary quarrel and what is domestic violence? Could I have done anything more without seeing him actually physically harm her? What would the effects of witnessing this threat have on the child?

Since 2010, I have sat on the board of the Global Foundation for the Elimination of Domestic Violence (GFEDV), and am a signatory to the Peace One Day's Global Peace Declaration, supporting efforts to end the global epidemic of domestic violence and gender-based abuse. The organisation, which I founded, Wellbeing Foundation Africa (WBFA), has taken a strong stand against domestic violence through the production of documentaries, peaceful awareness marches, social media campaigns, and joined the Nigerian Legislative Advocacy Coalition on Violence Against Women (LACVAW) to lobby the Nigeria's National Assembly to pass the Violence Against Persons Prohibition (VAPP) bill. We want our nation to bear witness to the dark secret that affects one in two households in Nigeria, and have worked tirelessly to raise awareness of the issue.

But when faced with a suspected domestic violence case, what can you personally do to help? You may feel powerless -- like I did at the restaurant -- but there are in fact, many things that you can do. The GFEDV has developed a range of training modules for medical professionals, such as doctors, midwives, and community health workers as these professionals are primarily the first point of contact for victims of domestic abuse. The training is designed to help professionals spot the first signs of abuse and help victims. Even if you are not a medical professional, the GFEDV and Peace One Day have partnered to help individuals organise awareness workshops in their local areas that can instruct individuals, organisations, and businesses can help combat domestic violence.

I reached out to Baroness Patricia Scotland, former UK Attorney General and Patron of the GFEDV for her view in this article. "Domestic violence does not discriminate -- it can affect every corner of our society -- from our campuses to our homes. Women aged 15-44 are more at risk from rape and domestic violence than they are from cancer, malaria, motor accidents and war. As a community, we have to make it very clear that this is unacceptable and work collectively to sensitize communities to the violence that continues to permeate our homes."

When we bear witness to an act of domestic abuse, we are made uncomfortable. We feel unable to stand in when the definition is unclear, yet we cannot sit idly by. Respecting one's privacy can come at odds with the impulse to help but we must stand up and help the victims where we can. We must do whatever we can, and better training and awareness within communities of the ways individuals can help victims, will go a long way in ending domestic abuse and gender based violence.

For more information on GFEDV and Peace One Day, please click here or leave a comment below to request assistance on local efforts within your community.