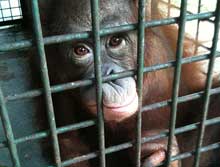 An international stakeholders conference organized by the Indonesian Forestry Ministry, entitled, Man of the Forest: Orangutan and the Future of Humanity, was held July 15-16 at a posh local resort off the eastern coast of Bali. Government officials from Indonesia and Malaysia and corporate executives of palm oil plantations, pulp and paper and mining companies operating in orangutan habitats across Sumatra and Borneo met to determine a course of action for the future of orangutan "conservation" at the USAID supported event. They were joined by a conglomerate of dedicated NGO and non-profits including a small delegation of direct action environmental and animal rights activists who showed up on behalf of the real stakeholders, the orangutans.

"Everyone wants to talk about statistics and research, and believe that we are achieving success, but the situation is worse now than ever and no one wants to address the real issues. The orangutans are losing." said Hardi Baktiantoro, Director of COP, The Center of Orangutan Protection, during a press conference held in a sparsely filled room adjacent to the main conference.

The third largest forest nation with 120 million hectares, Indonesia is subsequently the world's third largest carbon polluter and loses more than 1 million hectares per year due to illegal logging, illicit land clearing and forest fires. About 90 percent of orangutans live in Indonesia, between Sumatra and Borneo islands, while the remaining 10 percent can be found in Sabah and Sarawak, Malaysia. Both species of orangutans have been place on the red list of The International Union for the Conservation of Nature (IUCN) with The Sumatran species listed as critically endangered.  According to the Ministry of Forestry's own findings, an estimated 100,000 wild orangutans have fallen innocent victim to the chainsaw powered by corporate greed or have been sold into captivity since 1970.

"On paper, orangutans are one of the most "protected" species in the world, yet this is not the case even in so called "protected" areas," added Baktiantoro who has rescued over 300 orangutans in his lifetime from the most destitute of situations. "I have seen orangutans beaten with wooden sticks and many with crushed skulls," he added as he presented a slide show of both heart wrenching and infuriating photo evidence. "Right information leads to right action and therefore our aim is to investigate and expose crimes against orangutans through photo and video documentary."

The grim reality is that orangutans are dying at unprecedented rates due to rapid deforestation caused directly by palm oil and logging companies. To worsen matters, The Forest Ministry, which is the very entity responsible for enforcing existing conservation law, is directly profiting by selling "licenses" to these corporate outlaws who are destroying critical habitat at exhausting rates and brutally taking down these undeserving and innocent victims in the process. 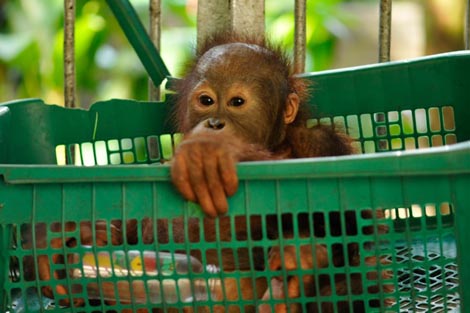 Typically, the companies responsible for "clearing" the forest hire hunters to slaughter the remaining orangutans who have not already been burned to death during the fires or killed by falling from their treetop homes while being hunted for bushmeat. More often than not, orphaned babies are taken and later sold as illegal pets or into torturous conditions to local "zoos" that resemble primate prison camps. Or they are illegally funneled into the international black market where they are left at the mercy of middlemen until they reach their final owners as far away as the Middle East or Europe. A symbol of status both locally and throughout many Asian cultures, owning an "exotic" species is quite commonplace even though orangutans in Sumatra and Kalimantan (Indonesian Borneo) have been listed in appendix I of the Convention on International Trade Endangered Species (CITES), which in theory makes their trade and possession illegal accept under "special circumstances."

In some cases, orangutans are simply abandoned to survive with what very little is left of their once lush and abundant surroundings. In such situations, they do not survive long. Other times rescue workers from NGOs such as COP or Orangutan Outreach have the grueling task of recovering them from more severe conditions such as crippling cages where they have been left chained, confined and malnourished for the remainder of their short lives. Under normal conditions, orangutans can easily live into their 50s. 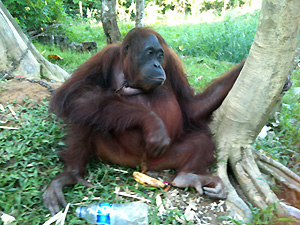 "Pingky: chained to a tree for 13 years." Courtesy: Orangutan Outreach

Richard Zimmerman, founder of NYC-based non-profit Orangutan Outreach, was at the conference last week after returning from a rescue mission in West Kalimantan, where he and his team are in the process of building a critically needed rehabilitation center in the remote city of Sintang. According to Zimmerman,

"The situation facing orangutans in the wild is nothing short of genocide, and West Kalimantan is the new Ground Zero in the fight to save these gentle intelligent creatures. For too long the orangutans in this remote Indonesian province have been left to defend themselves, and the result has been catastrophic. But now, through cooperation with the Indonesian Ministry of Forestry and other local stakeholders, we are giving these orangutans a fighting chance."

However the work is not easy, or cheap. Zimmerman added,

"These rescue operations cost money, and we are depending on our donors' support to help us keep going. In order to build a successful rehabilitation program for orangutans, it is absolutely critical that we have sustained support both locally on the ground and financially from abroad. The economic crisis has not been kind to small non profits like Orangutan Outreach, but we have to keep going. Otherwise, the orangutans will be wiped out." 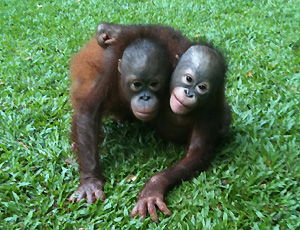 At the 2007 Bali climate change conference, President Susilo Bambang Yudhoyono announced conservation strategies aimed at stabilizing the habitat and populations of both the Sumatran and Bornean subspecies by 2017, as well as the release of all captive orangutans back into the wild by 2015 through a rehabilitation program. Yet those who work directly in the field such as Bungaran Saragih, Chairman of the Board of Trustees of the Borneo Orangutan Survival foundation (BOS), point to the severe lack of progress on either initiative.

"First, there are still no visible signs of stabilization of orangutan habitats or their populations," he said. "Second, the rehabilitation target is still far out of reach, because in the three years since the plan was announced, we haven't seen a single individual released back into the wild." According to Bungaran, locating large, undisturbed areas of forest, suitable to accommodate the released orangutans is a major part of the problem,
"At BOS, we have around 850 orangutans in rehabilitation centers, but we can't
release them precisely because of this problem," he said.

Recent studies indicate that this highly sophisticated species whose DNA is 97 percent similar to homo sapiens will be the first great ape to become extinct if urgent action is not immediately taken.  Currently, approximately 7,000 Sumatran orangutans still exist in the wild, while an estimated 45,000 remain on Borneo. Orangutans play a crucial role in regulating the natural health of the forest by dispersing seeds and opening the forest canopy allowing sunlight to nourish the soil.  Their absence would carry a devastating "trickle down" effect upon the entire delicate eco-system.

With tens of millions of dollars of foreign aid investment over the past three decades and a recent billion dollar backing by Norway for Indonesia to curb greenhouse gas emissions by reducing deforestation, it may be up to international entities to apply serious pressure to the Indonesian government to choose conservation over corruption. Otherwise, perhaps The Hague would be a more appropriate venue for future "stakeholder" meetings.

According to  Gary Shapiro, co-founder of Oran Utan Republik and the first person to successfully teach sign language to free-ranging, ex-captive orangutans, the responsibility also lies with the local populations to protect their homeland and the intricate web of species that reside within it.

"By building a capacity of young people through education in conservation, we are here in a supportive role and continue to encourage that Indigenous Indonesians be willing to demand more from their government."   Added Shapiro, " I have been coming here since the 1970's. The most important word to learn in Indonesian is sabar. It means patience"

Unfortunately, patience is something that these gentle forest dwellers may not be able to afford much longer. Every minute, an area of forest the size of ten football fields is lost in Indonesia with wild orangutans disappearing at a rate of 2,000 per year. In a 2007 United Nations report, "The Last Stand of the Orangutan: State of Emergency," orangutans were given a sentence of 5 years before extinction in the wild. Unless there is an immediate turn around and a shared responsibility to diligently address this government sanctioned annihilation, the collective human family may be responsible for banishing our closest living relatives from the Earth forever. 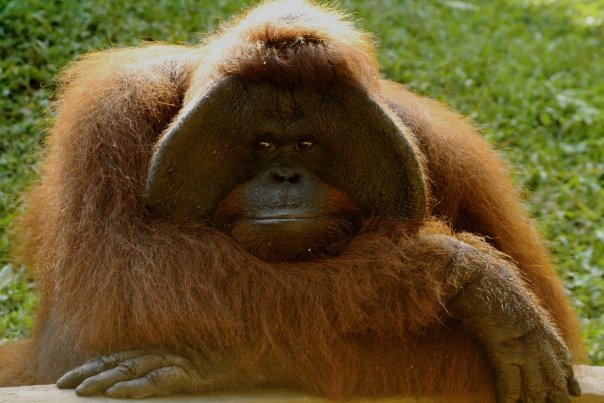 "Jackie: Isolated in Captivity at The Bali Zoo" Deborah Bassett

To learn more about the crisis facing the orangutans and see what YOU can do help, please visit the Orangutan Outreach website: http://redapes.org