The world's largest orangutan rescue organization, Borneo Orangutan Survival Foundation (BOSF) reported the horrific killing of a female orangutan this month. She was found in a palm oil plantation that belonged to a subsidiary of the Makin Group of Indonesia. You can read the full story here but in short : 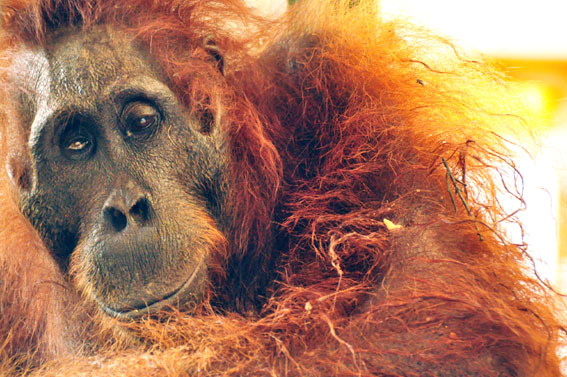 The BOS Foundation in Nyaru Menteng found more than 40 shotgun pellets in the body of an adult female orangutan delivered by the Central Kalimantan Conservation of Natural Resources Authority (BKSDA) on Thursday morning. The team did not manage to save her life.

The poor orangutan also suffered broken legs and arms although the press release did not specify whether these were a result of the violence inflicted upon her. This is not the first time that rescued orangutans were found with multiple shotgun pellets. A similar story in 2012 had a male orangutan shot sixty two times.

The rapid expansion of palm oil plantations has been identified as a key threat to the survival of orangutans. Renowned orangutan expert, Dr. Birute Galdikas pointed squarely at palm oil in a recent interview and I quote:

"If orangutans go extinct, it will be because of palm oil."

Incidences of extreme cruelty against the human-like orangutan is what is driving the very popular anti-palm oil sentiment. Some friends of mine in Australia who administer a facebook page on palm oil need only mention which brands contain palm oil to get a massive public response to their posts. Their popularity is due mostly to the fact that their audience loves having Australian brands "outted" for using palm oil as Australian labelling laws do not require the specific naming of which vegetable oils are used in products.

The European Union labelling laws were similar until now. New regulations mean that food products sold in the EU will have to name specifically what types of vegetable oils are used in products. The popular anti-palm oil sentiment has not gone unnoticed. An online petition by Italian food news organization Il Fatto Alimentaire has gathered 73,000 signatures (and counting!) asking to "Stop the invasion of palm oil." Italian brand Alce Nero even displays the words "palm oil free" in its Italian language website!

What if we all went palm oil free?

Palm oil free statements may be a good way for brands to avoid harassment by activists and it's certainly a low cost marketing gimmick but it's not going to save any forests or orangutans.

The global consumption of vegetable oils which includes palm, soy and canola is over 150 million tons today, with palm oil making up some 56 million tons of it. Indonesia and Malaysia which produce over 80 percent of palm oil, also happens to be the only places where orangutans are found. Total land area used to grow palm oil in these two countries are approximately 34 million acres today. So, if the world went palm oil free today, how will we replace the lost supply of vegetable oils which we use to cook with and now increasingly drive and fly with in biofuels?

There is simply no way to substitute palm oil in our lives with soy or canola without decimating wildlife and biodiversity in our own backyards.

The thing we should all be doing as consumers is to demand that the companies who make the stuff we buy, use only certified palm oil. Many more orangutans will fall and as African countries open their forests up to massive industrial plantations for palm oil, I am sure we can soon add chimpanzees and gorillas to the list of wildlife threatened with extinction by these massive plantations.

The only certifying body for palm oil is the Roundtable on Sustainable Palm Oil (RSPO) which has been working for ten years to make sustainable palm oil the norm rather than the niche which it is right now. It remains a niche because we have not asked the brands we buy to use certified palm oil when they choose palm oil over other vegetable oils. The new EU labeling requirement caused a spike in the sales of certified palm oil as brands tried to protect themselves over an anticipated back lash once they were "outted" as using palm oil. This increased demand for certified palm oil will not grow beyond this year's level unless, we all demand that it happen.

A clear distinction should be made here on Certified Palm Oil. It's true that members of the RSPO have been found guilty of destroying rainforests and therefore orangutan habitat but you have to understand this. Any company willing to pay membership fees, can become a member of the RSPO BUT its plantations may not necessarily be certified!

Certification costs money. At a time when 50 percent of certified palm oil goes unsold because of a lack of demand, why would anyone pay more money to get their plantations certified? Makin Group is one of the bigger palm oil producers in Indonesia and they are not even members of the RSPO! We can demand justice for the orangutan killed in Makin Group's plantation but to make a stronger case for orangutans, chimpanzees and rainforests, we should add a demand to brands like Pepsico that if they're going to keep using palm oil, that palm oil had better come from certified plantations.