When New York Post reporter Stephanie Smith announced to the world that she was making 300 sandwiches to earn an engagement ring -- and blogging about it -- the Internet exploded with commentary over the oddly retro arrangement.

Stacey Brook, a 30-year-old college admissions essay consultant and freelance writer, had a particularly strong reaction to the 300 Sandwiches saga. But instead of tweeting something snarky about it (as many of us did), she created a blog titled Ordering 300 Sandwiches, documenting her "attempt to win a man's heart, while expending as little effort as possible." And -- spoiler alert! -- it's totally brilliant. 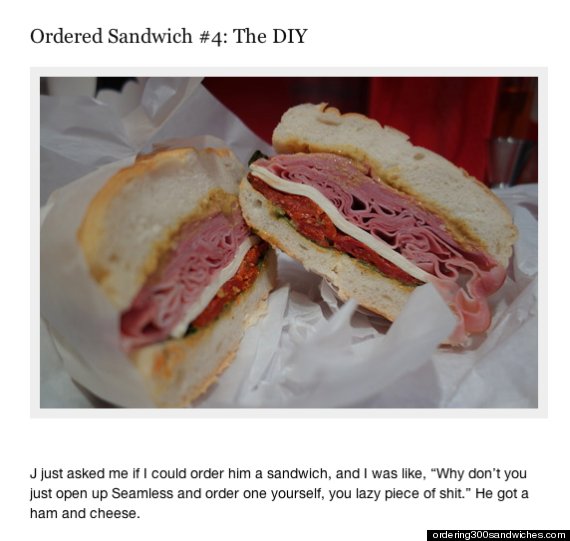 Ordering 300 Sandwiches features slightly more doable sandwich recipes than Stephanie Smith's gourmet creations. They include things like "The Shitty Bacon, Egg and Cheese on a Roll" ordered from the corner bodega and "Half a Bag of Milano Cookies," which actually count as 10 sandwiches.

"Where is this woman finding the time to make all these designer sandwiches?" Brook joked with The Huffington Post over email. "I need to know. I can barely get out of the shower in time to catch the delivery man with my clothes on."

Brook, who lives in New York City with her long-term boyfriend in what she calls "non-marital harmony," told HuffPost exactly what irked her so much about the original 300 Sandwiches:

I am pretty non-traditional when it comes to romance, and I firmly believe in the importance of embracing other people's quirks and strange demands, as long as they suit you. That said, "Make me 300 sandwiches" is a ridiculous and totally arbitrary request -- I don't even know how the author of the blog was able to take it seriously. 300 sandwiches? Why not 3,000? Why not 3 million? I think the blog was a botched attempt to cutely interpret, what is on a base level, a pretty demeaning ask ... A marriage is a contract that requires the eager participation of two people, and when even a hint of subservience is laced into the deal, even in a pseudo-joking way, it just leaves a bad taste in my mouth. 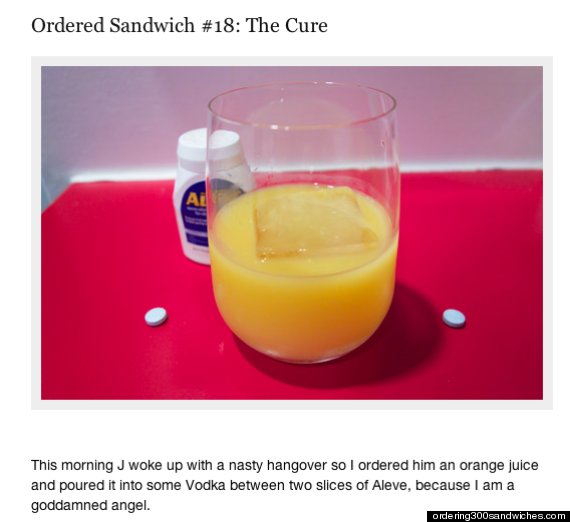 "If I get married one day, I hope the union is based on compatibility and the concurrent desire of me and my partner to build a life together," Brook said. "It's either going to be that, or good, old-fashioned blackmail."

We support the idea of a union based on mutual respect, partnership, and a love of sh*tty egg and cheese sandwiches.

Click over to Ordering 300 Sandwiches to read about more about Brook's close relationship with Seamless.