At 6:15 p.m. on August 29, 2010, at a secluded mountaintop hermitage overlooking the Pacific Ocean in Sonoma County, California, four women, all long-time dedicated practitioners, were declared fully ordained as bhikkhunis, Buddhist nuns, in the Thai Theravada tradition. It was the first such ordination ever in the Western hemisphere, and it was epochal since their preceptors were nuns in their same tradition.

Although the Buddha ordained both monks and nuns, the order of nuns disappeared a thousand years later when it became clear that there were no nuns available to ordain new nuns. Keeping strictly with tradition (and in keeping with patriarchal pressures) the rule that nuns needed to be ordained by nuns brought the order of nuns to an end, and women were able to join a community and practice in only an inferior status. The pressure brought by women ardent to practice and have roles and recognition comparable to men has enabled some women, trained in the Theravada Thai tradition, to be ordained by nuns with Sri Lankan ordination. The nuns ordained Sunday join the now small group of recognized bhikkhunis in the Thai Forest tradition that can now continue to grow.

The formal ceremony began with a procession of monastics entering single file though the gathered community to take their places in a simply constructed pavilion that had been decorated with flowers. Members of the community shared rose petals from prepared baskets lining the way so they could strew the petals along the path as the monks and nuns passed by. I thought of the similar use of flower petals at weddings understood how in both cases the flowers are marking holy space in preparation for a sacrament.

I was awed by the hours-long ceremony of asking for admission, being granted permission and being blessed. The part I sense in myself -- I think we all must have it -- that longs for inner peace resonated in joyful participation as the new nuns bowed to their sister nuns, and then to the twelve Theravada monks who had come from monasteries and retreat centers all over America to add their blessings. Bhani Henepola Gunaratana, the eldest of the monastics, offered words of teaching and blessing. Ruth Dennison, at eighty-eight a most venerable lay teacher in the tradition, also added her words of delight and blessing.

It's probably fair to say that not many people outside of Buddhism have been aware of the exclusion of nuns from equality in monastic practice in the Theravada tradition. Nevertheless, I felt the event as an epochal one, and not only for women in Theravada practice. Each time equal opportunities are afforded to women where they had not been before, each time gender barriers are eliminated and women are emancipated, all women benefit. All people benefit. The world is made more harmonious.

The Buddha's final teaching emphasized "avoiding schisms in the community." Sunday's ordination is a ratification of that teaching.

PHOTO GALLERY
Ordination of Bhikkhunis in the Theravada Tradition
Download
Calling all HuffPost superfans!
Sign up for membership to become a founding member and help shape HuffPost's next chapter
Join HuffPost 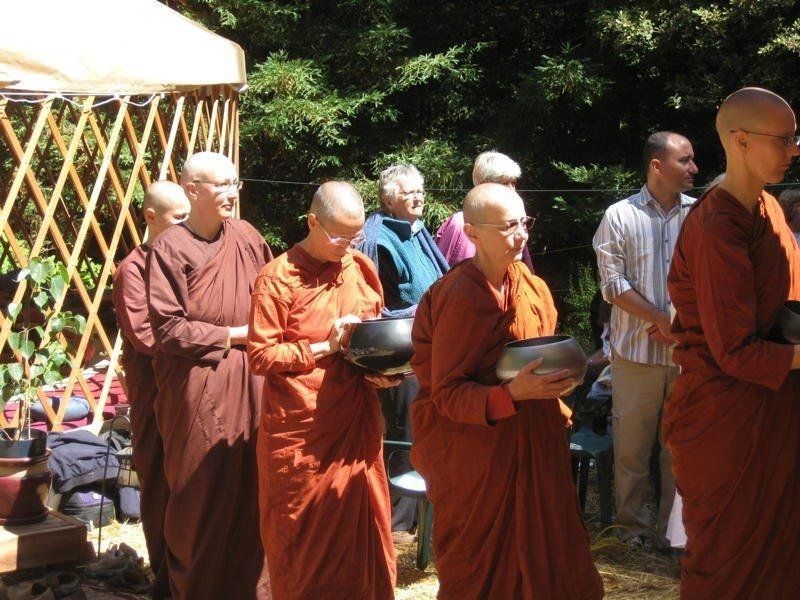