For as long as anyone can remember, something strange has been happening at Lost Lake in central Oregon's Willamette National Forest.

Around this time each year, the lake drains down a huge hole (see video above). Just where all the HO goes has been a bit of a mystery, The Bulletin reported.

The lake "fills up in the winter, when input exceeds the rate of draining, and then it goes dry [as the spring turns to summer] and it becomes a meadow," Jude McHugh, a spokeswoman for the national forest, told the Bend, Ore.-based newspaper. If anyone were to plug the hole -- which McHugh said she hopes no one would try to do -- it would cause flooding. 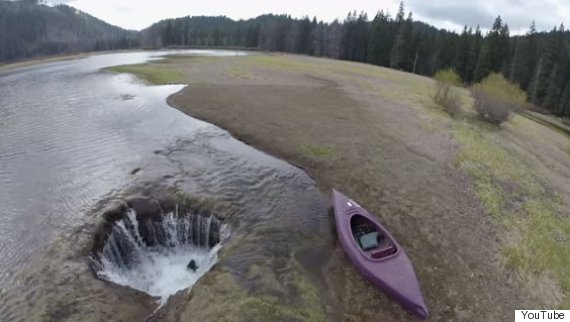 Water flowing down the hole in Lost Lake.

McHugh recently revealed an explanation for the water's disappearing act, and it's simple science.

It turns out that the hole is an old, collapsed lava tube, McHugh told The Huffington Post in a telephone interview. Streams of lava that pour onto our planet's surface from Earth's interior form these natural conduits. The surface and outer regions of the streams cool and solidify, forming a tunnel through which still-molten lava continues to flow and drain away. Check out the infographic below.

An illustration of how lava tubes form, provided by the U.S. Geological Survey.

McHugh said that Lost Lake's water seeps into Earth's porous subsurface through the lava tube and refills the underground water supply that feeds springs in other areas of the forest and even provides drinking water for the community.

"It takes seven to ten years for water to travel through the porous rock out into the valley floor. It's a pretty amazing process," she said. "This is one place where you can dramatically see that water is going into the Earth."