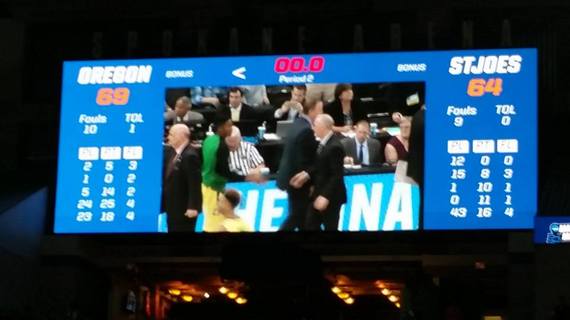 Spokane, WA - The Oregon Ducks rode key late three-pointers by Tyler Dorsey and Dillon Brooks to erase a late seven-point deficit to top a tough St. Joseph's team 69-64 to advance to the Sweet Sixteen. Brooks who was aggressive throughout, led Oregon with 25 points while Elgin Cook added 18. Oregon is the last Pac-12 team standing in the NCAA tournament.

Oregon trailed 58-51 with 5:32 left when Brooks made an old-fashioned three-point play, That was followed by two free throws by Casey Benson and a lay-up by Dorsey to tie the score at 58. After a St, Joe's basket Dorsey hit a key three-pointer to give Oregon a 61-60 lead. A Brooks three-pointer gave the Ducks a 64-62 lead with 1:22 remaining. Oregon had the lead at 67-64 in the final seconds when St. Joseph's had a chance to tie the game with a three-pointer. However Deandre' Bembry turned the ball over trying to receive a low pass. Dorsey was fouled and hit two free throws to give Oregon the five-point win.

Oregon won despite not shooting well. They were 4-of-22 on three-pointers before Dorsey and Brooks hit their shots. Bembry, a future NBA player, led the Hawks with 16 points and 12 rebounds. He was taken out of the game in the first half by Oregon's defense. He was moved to the top of the key and was able to operate more efficiently in the second half but St. Joseph's was hurt when 6-5 guard Aaron Brown fouled out. Oregon advances to face Duke in Anaheim on Thursday night.

Maryland (27-8) went on a 14-0 run in the middle of the second half to break open a close game and defeat Hawaii 73-60 to advance to the NCAA Tournament sweet sixteen. The Terrapins turned a 41-39 deficit into a 53-41 lead with the surge. Point guard Melo Trimble led the Terrapins with 24 points and eight rebounds, hitting on 13-of-14 attempts from the charity stripe.

Maryland took a 28-27 lead in the half and the Rainbow Warriors (28-6) kept it close until halfway through the second half. After Maryland went on their surge the game was more or less done as Hawaii couldn't mount a decent challenge. Maryland was very ineffective from long distance shooting a paltry 1-of-18. However they more an made up for that by connecting on 70 percent of their two-point attempts (21-of-30) and 90 percent on free throws (28-of-31). Hawaii went cold and only made 2-of-14 field goal attempts from the mid-point of the second half until late in the contest.

6-11 Diamond Stone was effective around the hoop for Maryland, hitting 6-of-8 shots and scoring 14 points. Guard Rasheed Sulaimon also contributed 14 points for the winners. Hawaii was led by 6-7 junior forward Mike Thomas with 19 points and 11 rebounds. Maryland held Hawaii to 33 percent shooting and the Rainbow Warriors were also ineffective from deep, hitting only 4-of-19 attempts.

Maryland advances in the South Region to face the overall No. 1 seeded Kansas Jayhawks on Thursday night.