On the night of Jan. 21, an Oregon citizen captured video of what he thought was a UFO. While we've offered many previous UFO videos, what makes this one especially interesting is that he got it in regular and night vision video.

The YouTube member identifying himself as "whotookmymojo," doesn't provide much in the way of details, such as exact time and location of this sighting, other than him mentioning on the audio track that it happened over southern Oregon.

This person describes the grouping of lights as orbs or spheres, including a single, consistently flashing red light, as if something you'd expect to see on a conventional aircraft. Yet, when he switches to night vision mode (approximately 3 minutes into the video), the lights appear as a more singular, solid form, rather than a series of individual lights.

Here's the video of the object in both regular and night vision.

This isn't the first time whotookmymojo videotaped something odd in the sky in night vision. He shot a previous video on May 8, 2012, also in Oregon. That video can be seen on his YouTube page.

Huffington Post sought the opinion of an expert who has analyzed many UFOs in an attempt to bring them into the realm of IFOs (Identified Flying Objects).

"I watched both videos. They are impressive. The reason is that the craft is quite stable," according to Marc Dantonio, chief photo and video analyst for the Mutual UFO Network.

"I am fairly certain that this is one craft and not several all flying close to each other. I determined this by looking at stars in the sky as the object passed by them," Dantonio told HuffPost in an email. "The starlight was blocked in a somewhat random manner as the craft passed in front of the one star that was occulted best, as seen from the camera recording the action. This indicated to me that there was hidden structure not visible in the view due to the darkness."

Dantonio, owner of a special effects company that creates models for the U.S. military, thinks the Oregon UFO was simply a small drone.

"This craft was slow moving, which was consistent with a multirotor-type drone, and this one could have been a six or eight-motor-type system, based on my familiarity with such systems. We created a drone for National Geographic and flew it as part of a UFO special to illustrate how these craft can be custom lit and mistaken for UFOs. Then, we exposed what we did so everyone could see the technology lurking in your local hobby shop. We found that placement of the lights goes a long way to making such a craft look really different."

The following composite image shows the drone created by Dantonio as seen in a 2011 National Geographic special: 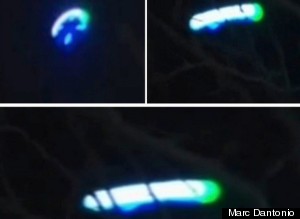 "One thing I did note, however, was that the audio track contained a faint dissonant hum that sounded like multirotor drone motors all working together and flying in stable flight," Dantonio added. "My experience with multirotors is such that the sound is what seemed recognizable."

And what does Dantonio have to say about that red flashing light on the object in question?

"The red flashing light on the bottom seems odd to the point where I am pretty confident this is no alien craft. It's probably an LED that's part of an existing drone package and is a light that lets you know you have a good radio control connection or have GPS signal or some such information.

"If it was an alien craft, I suspect there would be no need for lights at all. Aircraft have red and green lights for navigation, not for the pilots of that plane, but for the pilots of other planes. No aircraft needs its lights on to actually fly. They are only on for other pilots, which leads to safer skies."

As the year moves ahead, many so-called UFOs will undoubtedly turn out to be drones.

If only one non-drone could be the UFO smoking gun so many people are hoping for...