You know, as I walked up into the CVS across the street from my apartment a few days ago and saw the store festooned with Christmas decorations, I had two thoughts. First, I thought, "November 3rd! That's not so bad, actually!" And indeed, it wasn't: in previous years, area stores had their Christmas decor up before Halloween. But then I had another realization: namely, that the coming of the Christmas decorations brought an ill Yuletide wind along with it - the annual mindfrack that is Bill O'Reilly's War On Christmas.

It basically works like this. We live in a capitalist society, and consumer spending tends to increase during the Christmas season. To avoid alienating any customers during that peak period, many retailers have their cashiers say "Happy Holidays," because why not be nice? For centuries and centuries, this was totally fine with everybody because it made a lick of good sense. Then, one year, a bunch of feckless dimwits came to an extraordinary conclusion - saying "Happy Holidays" was "politically correct," and everyone who practices Christianity had the right to expect a complete stranger to recognize them as a Christmas practitioner by sight and specifically wish them "Merry Christmas," or else IT WAS WAR. Obviously, this latter position is the one you want to build an entire society around.

Bill O'Reilly has been, on a yearly basis, one of the most fervent and shrill public figures, wailing about the supposed War On Christmas, because he is precisely dumb enough to believe that Christianity, which has enjoyed an unprecedented run of absolute, total success in the United States - such that every single person who's run the country has been a Christian (and such that it's the only religious holiday in the world that's allowed to put their decorations up TWO MONTHS IN ADVANCE) - is actually fundamentally threatened each time a shop clerk opts to say "Happy Holidays." O'Reilly likes to cast himself as some sort of speaker of truth to power, but it's really all about his pinheaded sense of victimhood. Everyone else in the world needs to do O'Reilly a favor each Christmastime, despite the fact that Fox and News Corp. themselves fully embrace the use of "Happy Holidays."

Anyway, this has been a persistent fetish of O'Reilly's, and it never fails to make a mockery of people all over the world who truly are experiencing genuine religious oppression. Well that mockery has expanded into a retail division of its own, because now, if you buy O'Reilly's book A Bold Fresh Piece of Humanity (which we remind you is an anagram for "Shameful, Bona-Fide Hypocrite"), you get one of these bumper stickers: 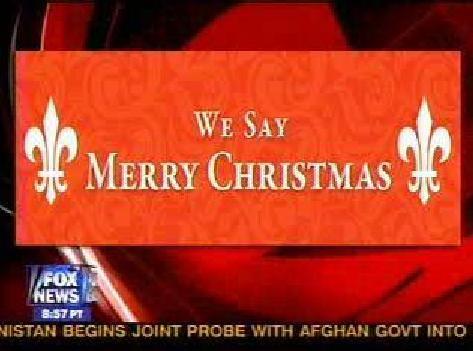 Stick it on your car and enjoy the perplexed looks from other motorists. I do love the pair of Fleur de Lis that bracket the text. Makes for a nice "unexpectedly swish" touch.