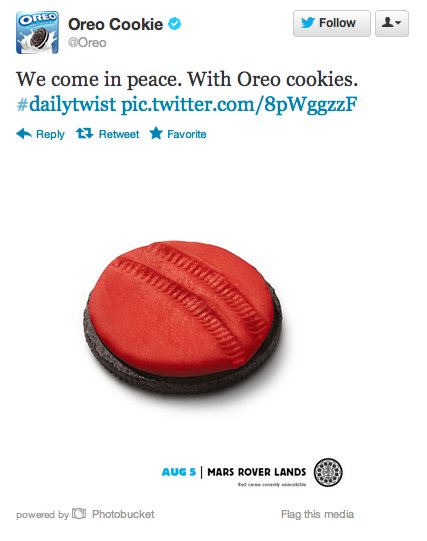 Reddit points us toward one of Oreo's latest tweets, which contains the picture of an otherworldly cookie reminiscent of recent images beamed back to Earth from Mars rover Curiosity.

NASA's robotic explorer landed on the martian surface Monday after nailing a challenging landing, which required the vessel to endure "seven minutes of terror" -- meaning radio silence -- before controllers knew the outcome. The first images of the planet's barren landscape have excited scientists and the average citizens around the world alike.

What's telling, though, is how casually the Oreo campaign, in its bid for virality, has merged the epic and the ordinary. Last night, we landed a robot on Mars. Today, a sandwich cookie celebrates that accomplishment. The fluidity here between history and banality -- and between science and pop culture -- is, actually, kind of wonderful. It represents an access point to a fairly complicated news story. It makes the epic seem accessible, and it makes the accessible seem just a little (teensy, tiny) bit epic.