On January 1, 2012 labeling of organic fertilizers also known as Organic Input Materials (OIMs), as defined under AB 856, takes effect in California. What does that mean to home gardeners and family farmers who worship the worm and its band of microscopic cohorts partying like rockstars in our compost piles? This new labeling requirement means that under the California Department of Food & Agriculture fertilizer law "input" materials acceptable to be used in an organic program of production will be distinguished from conventional chemical inputs and regulated in accordance with National Organic Program (NOP) and Organic Materials Review Institute (OMRI) standards.

A tremendous amount of effort has been invested in providing consumers with information about organic "input" fertilizers including, under the provisions of AB 856, giving CDFA authority to:

"Labeling of OIM products like compost provides consumers with useful information previously not required by manufacturers including product contents, directions for use and information on use for Certified Organic operations," says Professor Stephen Andrews, soil scientist at UC Berkeley, California. He advises to always look for the CDFA Organic Input Material logo, and read all package labeling before you purchase any fertilizer.

Why am I so compost-obsessed? Because I'm tired! With compost you get healthy soil that works for YOU instead of you working so hard for your petunias, your lame, oversized lawn and your cherished heirloom tomato plants. What's the magic ingredient? Microbes! Soil microbes. There are billions of them partying in every spoonful of healthy (compost-filled) soil. These macro and microorganisms eat and excrete plant food, and multiply. That's their job. And they're happy doing it. They are your people. They're busy keeping your plants healthy so you don't need to spray dangerous chemical fertilizers and pesticides on to your turf and into your local creeks by runoff.

My students at Marin Oaks High School in Novato, California. Even teenagers can grow food with no chemical fertilizer or pesticides. Just their iPods and compost, compost, compost!

Ironically, while you'll be able to know the contents of your compost, the same won't hold true for the more than 80% of foods on grocery store shelves manufactured with genetically modified organisms (GMO's) as an ingredient. If this doesn't concern you, it should. Think about it, how can knowing the contents of the food we eat be less important than knowing about the contents of our compost?

"As consumers, we have a right to know what goes into the products we purchase and that includes everything we use in our gardens as well as our bodies," says Andrews. "Labels are a powerful information source for consumers. Shouldn't the same hold true for the ingredients that go into your food? Honestly, it's a no brainer! What are these GMO proponents afraid of? If they're so great and wonderful for us to eat, be up front about it and declare your GMO greatness on the label. It's label up, or go crawl back into your plasmid! "

Have you been reading more about GMO's in the news lately? The Dr. Oz Show (ABC TV) recently aired two episodes with experts debating the touted benefits as well as the environmental and health concerns of genetically modified foods. These controversial ingredients are finally getting their 15 minutes of fame -- even though they have been in our food supply for over twenty years. Soybeans, corn, cotton and canola -- almost all of the acres planted of these crops across the United States are now genetically altered.

Not sure exactly what a GMO is? This manipulation occurs in a biotech lab by a geneticist taking a specific gene of one species; let's say a flounder, and inserting it into another, such as a tomato, or inserting a bacterium into a corn seed to make it resistant to certain pests. Genetically engineered food differs from traditional plant breeding because it breeds different species, a process which last time I checked, does not occur in nature....

As Doug Gurian-Sherman, a plant pathologist and senior scientist at the Union of Concerned Scientists wrote in his LA Times op ed piece, "Beyond patent law, agricultural companies hold a pocketbook advantage in terms of research. For example, they fund much of the agricultural safety research done in the U.S. And when deciding whether to allow a genetically engineered crop onto the market, the Department of Agriculture and other regulatory agencies do not perform their own experiments on the performance and safety of the product; instead, they rely largely on studies submitted by the companies themselves."

All 15 European Union nations, Russia, Japan, China, Australia, New Zealand, and many other countries globally require labeling of GE food. "Transgenic" seeds reduce the use of some insecticides," says Gurian-Sherman. "But herbicide use is higher, and respected experts argue that some genetically engineered crops may also pose serious health and environmental risks. The benefits of genetically engineered crops may be overstated."

Physicist Vandana Shiva believes the challenge of agriculture must no longer be to produce huge quantities of nutritionally unbalanced food, but rather to produce nutritionally balanced food in a sustainable way. Forbes magazine calls her "one of the seven most influential women in the world," and in 2003 Time magazine named her an "environmental hero." "Native seeds are embodiments of millennia of biological evolution, adaptation to changing climate and centuries of cultural evolution of communities. They embody the history of are our ancestors and they must be passed on to the future," says Shiva. "Since Monsanto started to control the cotton seed in 2002 in India, 240,000 have committed suicide. They get into debt since the new seeds are patented and the companies collect huge royalties. Farmers have been bombarded with the idea that their seeds are primitive and inferior; that the new seeds are modern and improved. Today, Monsanto has 90 percent control over the seed supply of cotton in a land where we used to have 1,500 varieties, including open-pollinated varieties. Heirloom seeds are traditional varieties that have evolved by farmers over millennia. They embody biological and cultural diversity and are the seeds on which our food security rests." 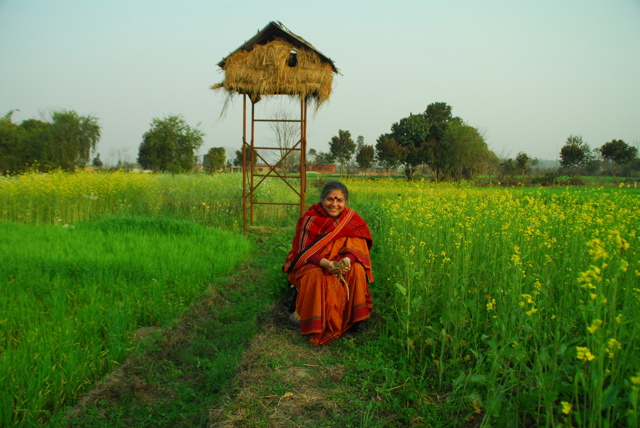 Photo courtesy of Dirt! The Movie.
Physicist Vandana Shiva on one of her organic farms. Her organization, Navdanya, has trained over 400,000 men and women in conservation, biodiversity and organic farming. (www.navdanya.org)

Stephen Andrews asserts that compost and GMO labeling are interrelated. "Food products containing GMO's have a waste component that has the potential to impact the "input" nature of organic fertilizers like compost. What comes out of the earth eventually returns."

Ready to get genetically engineered foods labeled in your supermarket? Pilgrim, you've come to the right place! The 'It's Our Right To Know' initiative for the CA 2012 Ballot has been turned in to the State Attorney General's office. In early January 2012, we will begin collecting the 800,000 signatures required to have this issue on the November ballot. We need your help. This is not a bunch of hippie-dippy tree-huggers. (Not that there's anything wrong with that . . .) This is a multitude of courageous, informed and educated parents and citizens who are concerned for the future of their children's food supply and natural resources.

And, okay. I'll admit it since I'm a diva. I would like my food to be safe because I believe the world revolves around ME. Get it? Got it? Good.

"Labeling GMO food products is a matter of informed choice, just like selection of the compost you use to grow organically at home," says Andrews. "Whether or not GMO's are beneficial is certainly a subject open to, and that should be, debated. The issue of labeling, however, should not." 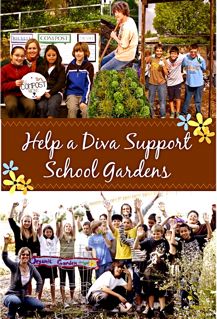