The Prophet Muhammad advised his followers to treat animals with kindness and, if needed, kill them mercifully for food. And he didn’t mince words.

“Whoever kills a sparrow or anything bigger than that without a just cause, Allah will hold him accountable on the Day of Judgment,” the Prophet reportedly said.

Remembering these instructions, New York farmer Zaid Kurdieh says much of the meat that brands itself as halal, or religiously permissible, is nothing but a sham.

For Kurdieh, if it’s not organic, it’s not halal.

“Most people associate halal with slaughter. But that’s just the end of the process,“ the 50-year-old Norwich farmer told the Huffington Post. “All animals have a right to live to a certain age, to eat good food, get good treatment. All of those things constitute halal.”

The Islamic Food and Nutrition Council of America, a halal certification organization, estimates that the U.S. halal market is worth at least $20 billion. And the industry is expected to grow, the AP reports.

Muslims like Kurdieh are now thinking deeply about how the recommendations the Prophet gave his followers centuries ago fit in with today’s fast-paced, global food markets.

For meat to be halal, animals are required to be killed by hand using a sharp knife, with a single slash to the throat. The person doing the killing should ideally be a Muslim who utters God’s name as the animal exhales its last breath. The practice is intended to make sure the creatures die swiftly and without much pain.

Death matters, of course. But quality of life matters, too.

“I don’t want to eat animals that were systematically abused their whole lives," Nuri Friedlander, a Muslim chaplain at Harvard University, told the Daily Beast. "From a spiritual practice, I didn’t want to get that into my body."

That's why some Muslims are beginning to look past the halal label and examine where exactly their meat is coming from.

Kurdieh is the managing owner of Norwich Meadows Farm, a small, certified organic company that raises chicken and turkey, while sourcing their lamb and beef from trusted local family farms. None of their animals are given growth hormones, antibiotics, or genetically modified foods crammed with animal byproducts. The creatures are raised outdoors and grass-fed, given the space to roam and grow at their own pace.

“When you take an animal out of the wild, you’re responsible for its eating, its drinking, whatever it needs,” Kurdieh said. “It’s a tenet of our religion.”

This philosophy is maintained by Honest Chops, a halal butcher shop in New York City that cuts up hand-slaughtered, ethically-raised beef and chicken.

Along with the word halal, Chops co-founder Imam Khalid Latif says the Koran uses the word “tayyib” when it talks about what kinds of foods Muslims should eat. Tayyib means something that is pure or clean.

“There’s a lot of unhygienic, unethical practices taking place,” Latif told the Huffington Post. “Animals are being fed excrements and processed carcasses of their own species. They’re lodged on top of each other with no room to walk. It’s disgusting and inhumane.”

Honest Chops has pledged an “Honest to God Guarantee” that its meats are grass-fed and raised in a way that conforms to Islam’s guidelines. They’ve also promised to pay workers “dignified” wages and give back to the community. 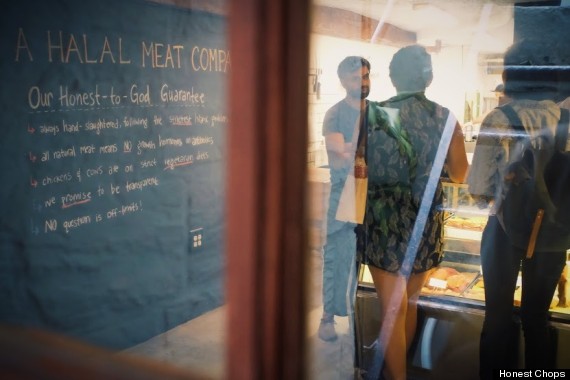 During this year’s Eid Al Adha holiday, which falls on Oct. 4, Honest Chops launched an Udhiya/Qurbani campaign. For Eid, Muslims are encouraged to offer an animal as a sacrifice in remembrance of God’s mercy towards Abraham, then offer portions of the meat to charity.

Latif said that the 2014 campaign will help feed 200 local families in need.

But conscious eating comes with a price. Kurdieh said his customers often experience “sticker shock” when they see the prices of his meats.

“A pound of chicken at the green markets is $7, while they’re buying industrial chicken at $1.50,” the farmer said. “A lot of education has to happen before this becomes a widespread movement.”

For Latif, change starts with understanding that worship happens in a “framework of selflessness.”

“People have to understand that being Muslim isn’t something that just benefits them, but also brings benefit to the society around them,” Latif said. “It’s understanding that you have something to give back.”