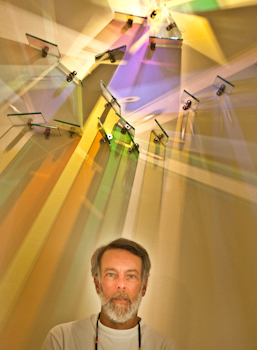 For credibility in scientific analysis of nutrition in crops, you can't get much better than the Linus Pauling Institute at Oregon State University. That would have been terrific to know during a frustrating search for an Ag school lab capable of analyzing nutrient content... but then, all's well that ends well. LPI had the capability and willingness to work with a passionate individual, as well as with large food councils and corporations. They provided compelling results for the study chronicled in our blog, Julie's Adventures in the Soil. After six months of discussions, we wanted to meet Bob Durst, the scientist behind the data, and to visit the Institute.

Administrative Officer Steve Lawson, who worked side-by-side with Pauling for almost 20 years, gave us a profound appreciation of the genius behind the Institute. Graduating from OSU's Oregon Agricultural College in 1922, Pauling won two Nobel prizes, for chemistry and peace advocacy. However it wasn't till after Pauling's death, in 1996, that his legacy institution came to the campus.

"Determine the role of micronutrients (vitamins and essential minerals), phytochemicals (chemicals from plants), and dietary supplements in extending healthy lifespan and preventing or treating age-associated diseases, including cancer and cardiovascular, metabolic, and neurodegenerative diseases."

Touring the light-filled facility, Bob brought us to the intimate High-Performance Liquid Chromatography Lab, where the soils study samples were analyzed. This lab analyzes a wide variety of compounds, such as protein and phytochemicals, as well as determining amounts of vitamins A, C, and E. This is where the rubber meets the road and the quantitative benefits of the Sea-Crop amendment applications were investigated. 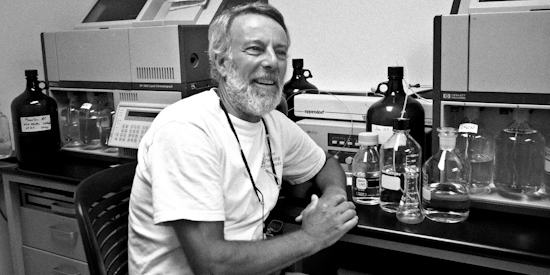 Our discussions raised critical questions: How do conventional and organic farming and manufacturing processes impact food quality? What toxins are present in raw and processed products? How does milling and cooking alter nutrient composition?

Bob notes that a growing portion of LPI's work "...is now being applied more broadly to nutritional parameters, as an extension of interest in personal food issues and specialty products like heirloom produce, artisan cheese, bread and microbrews."

We realize that this is the scientific component of a common thread in our stories: heightened awareness of what we put in our bodies. This has created a growing market for nutritional study, testing amongst other things, the assumption that fresh and/or organic is better. To date though, big-ag clients have shown little interest in nutritional characteristics.

LPI has provided surprising results in comparing fresh vs. processed foods. For example, Bob was commissioned by the California Cling Peach Board to analyze the nutritional value of canned vs. fresh peaches in an attempt to counter the perception that fresh is naturally better and to maintain an open door for canned peaches in school lunch programs. Bob's work determined that in processing, heat slows the natural enzymatic degradation of nutrients. The processed fruit actually had higher levels of some nutrients, somewhat higher levels of select vitamins and slightly lower levels of other vitamins.

Much to our surprise, this challenges the common wisdom, but as Bob states: "Processing and canning stabilizes the nutrient level. The chemical basis counters the anecdotal evidence."

Related to pesticide use, Bob personally takes a long-term point of view, noting that: "The body has evolutionarily developed means to mitigate the natural pesticides developed by plants. The body doesn't distinguish between natural and chemical pesticides, but combats both."

However, he recognizes that the "...acceleration of development and exposure to modern toxins may defeat the body's natural defenses." This was eerily similar to the "The Great Acceleration" rationale quoted in our story on the Occidental Arts and Ecology Center.

The scientific approach that motivates LPI can be a disconcerting challenge to the common wisdom of organic growing. However, the lab is peeling back the onion layer by layer and exposing the complexity of food-related issues. On toxicity, Bob notes:

"If you look hard enough at a molecular level, any toxic compound can be found in the body. At some level, everything is contaminated with everything... airborne, soil, water, ourselves."

Personally, Bob is committed to the organic food movement. His own company, Simple Organic Solutions, was an independent contractor to Oregon Tilth (subject of an upcoming story), where he inspected and verified companies seeking organic certification. He tracked processed products, such as milk, cheese, beer and wine from farm source to processor to ensure they met certification criteria... one of the required complexities in organic foods.

Part of Linus Pauling's genius was the ability to deductively weave theories from empirical and anecdotal evidence, leading to new scientific research. Correspondingly, Steve, Bob and the Institute are keen on collaborating with the OSU Agriculture program to study nutrition in crops and soil. They feel that nutrition data is woefully out of date, based on old research. With both big-ag and organics, new varieties and new practices are changing food characteristics in ways not adequately studied -- a mission LPI would love to undertake with the Ag school.

Surrounded by this technical expertise and sophisticated labs is a far cry from the pastoral experiences we have had in farms and fields. Yet this is a critical piece of the nutritional puzzle, where bio-science informs. In the tradition of their founder, the scientists of LPI are exploring connections and relationships for our collective well-being.

The Face Of Hunger Isn’t What It Used To Be