We may be one step closer to finding alien life.

Astronomers have found complex organic molecules -- the chemical building blocks for life -- in the planet-forming disk of gas and dust around a young star, according to a new study.

Though such life-forming molecules have been detected in interstellar space before, this is the first time they've been seen in the turbulent environment of a newly formed star system.

"Now we know we're not unique in organic chemistry," Karin Oberg, an astronomer with the Harvard-Smithsonian Center for Astrophysics and the study's lead author, said in a written statement. "Once more, we have learned that we're not special. From a life in the universe point of view, this is great news." 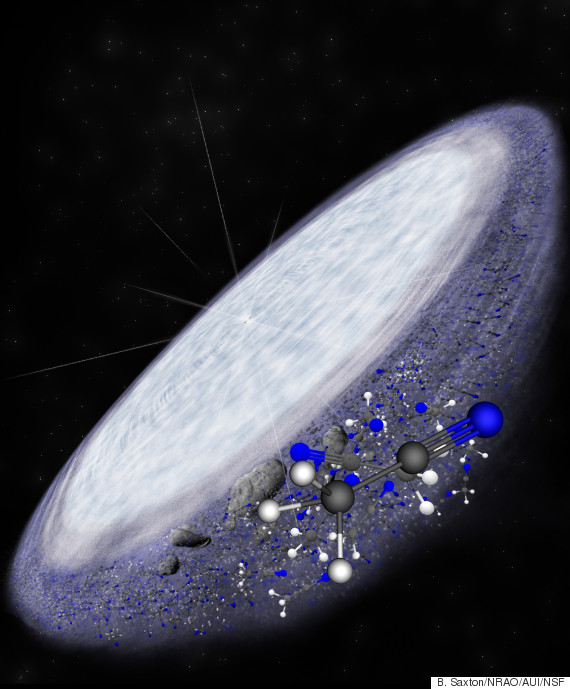 Artist's impression of the disk surrounding the young star MWC 480.

Oodles of organics. For the research, Oberg and her colleagues used the Atacama Large Millimeter/submillimeter Array (ALMA) telescope in Chile to study a million-year-old star called MWC 480. The star lies about 455 light-years away from Earth and is around twice as massive as our Sun.

The team detected great amounts -- enough to fill Earth's oceans, in fact -- of methyl cyanide, a complex compound which contains the carbon-nitrogen bonds that are essential for the formation of amino acids.

The compound was found in the disk's cold outer portion, similar to our solar system's comet-filled Kuiper Belt, Science magazine reported. Scientists believe comets from the Kuiper Belt may have brought the key ingredients of life to Earth.

A universe well primed. What does the new study mean for the search for life? Scientists who were not involved in the research say it's encouraging, though far from definitive.

As Geoffrey Blake, a planetary scientist at the California Institute of Technology, told Space.com, it suggests "pivotal" compounds needed for life may in fact be universal.

Seth Shostak, a senior astronomer at the SETI Institute, told The Huffington Post in an email that he didn't find the discovery of the compounds particularly surprising, but he was impressed by the amount of it that was found, and how quickly it was made.

"It seems the cosmos is very talented at making the type of carbon compounds that underpin biology" he said. "The universe is clearly well primed for life. But is life really out there? That's the big question, and getting the answer will surely be one of the great endeavors of the next two decades."

The study was published online on April 9 in the journal Nature.