Acclaimed organist Christopher Houlihan returns to San Francisco for an all-French program at Grace Cathedral this coming Sunday at 4pm. Christopher's selections include Louis Vierne's Carillon de Westminster and "Scherzo, Cantabile, and Allegro" from Symphony No. 2; César Franck's Choral II in B minor; and Olivier Messiaen's "Serene Alleluias and Outbursts of Joy", from L'ascension. The loftiness of Grace Cathedral and the carriage of its sound reflects the environment in which the writers created these works. The compositions abound in imagery, emotional spirals, complex architecture, and - as I suggested to Christopher - a few squirrelly moments here and there. The 7,466 pipes of the cathedral's magnificent Aeolian-Skinner are in for a full-range work-out. 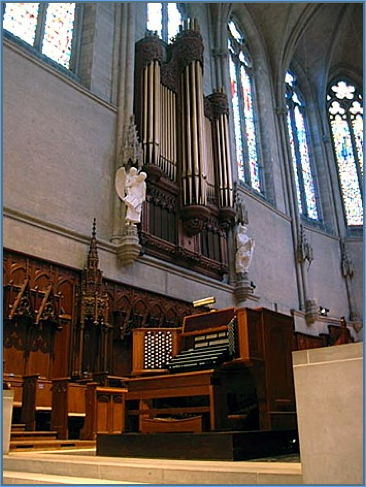 The Aeolian-Skinner at Grace Cathedral. Pipedreams

"I really wanted a program that was going to do all of that," said Christopher. "Overwhelm them with the power of the organ and then make them lean-in to listen. You're right - some of this music is demanding. Starting with the Vierne 'Carillon de Westminster' - which I think is a fun way to begin. It's based on the Westminster chime themes that everyone knows and probably as a clock chime. Vierne has this fantasy on the theme. You get the gear turning in the clock and hear the bells bonging down in the pedals. It builds and builds to a huge climax.

"People are often surprised by the idea that every organ is different. Every organ is custom built for the space it is in. The organ at Grace Cathedral is an instrument that can grab your attention. Grace Cathedral is a true cathedral space - a huge building with that kind of acoustic. So, you need to choose music that's going to fill that room in a captivating way. This is the kind of music that can fill that kind of grand space." 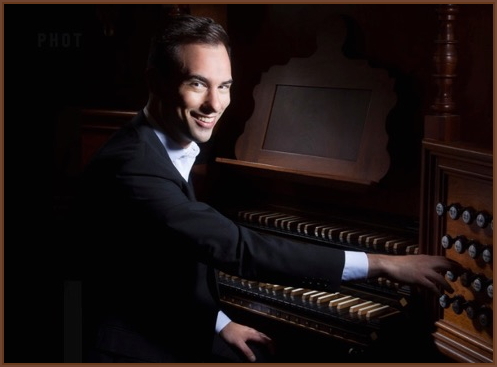 "Vierne was organist at Notre Dame Cathedral. He knew this kind of reverberation. These pieces really feel at home in an acoustic more like Grace Cathedral than at Davies Hall. I think they work in a variety of acoustics. I tend to like a drier acoustic - you hear details in the pieces differently. In the Franck especially, there is some fugal writing, as well as in the Vierne symphony - intricate details that you can't hear as precisely in a wet room. The effect is different, but there is still appreciation. Franck is very interested in the music of Bach and counterpoint. Franck's choral is huge, really a choral fantasia - it goes off in all sorts of directions. But in the middle of it there is a bit of a fugue - a Franck fugue, not a Bach fugue. It's like Franck is imitating Bach or sort-of tipping his hat to Bach - but doing so in his own voice. We have these musical lines that weave together on their own. They could be independent, but the melodies weave together in a magical way. Basically, that's what counterpoint is - independent lines that could otherwise exist on their own but work together."

Works with descriptive titles, such as Messiaen's L'ascension, can guide a listener (possessed with an active imagination) through a specific, even mind-boggling event. The piece might also serve as a meditation or means for exploring the subject - in this case, a tenet of Christian faith. Messiaen's relentlessly challenging Livre Du Saint-Sacrement is a supreme example. Are the works intended to persuade? I asked Christopher ("Houli" to his loyal fanbase) for a hit on this idea - keeping in mind that Franck's B minor choral appeals to an appreciation of music for its own sake. 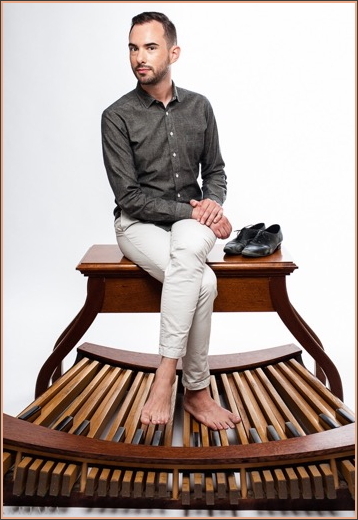 "Possibly. In some ways, yes. Franck's music exists on it own. Maybe it's more like a poem than a painting. It's a piece that takes you on a bit of a journey. It has its two themes that weave together in interesting ways that surprise you. It also has different moods along the way. It's melancholy and then it's fiery, contemplative and ethereal. It goes through all these different atmospheres. Whereas Messiaen is trying to depict one story, one idea. I have to approach the Messiaen pieces as I would looking at a painting. The subject matter may be a sacred image, but I can still appreciate the beauty of the painting, the technique that went into creating it, and the overall effect of it. I don't think you have to be a devout Catholic to appreciate and be bowled over by the beauty of Messiaen's music. I know that can be challenging for some people. But you can approach it with an open mind and appreciate the image being painted whether or not you have a connection to the subject matter. I play music I want to hear. I try to communicate to the non-organists in the room. For me, that's the way to be an effective musician. Organ music needs to be appreciated by a wide audience - if we want to have it survive and have any relevance. That is more interesting to me, more satisfying."

Christopher's latest recording, Christopher Houlihan Plays Bach will be released on the Azica label February 17. The album was recorded at the Trinity College Chapel in Hartford, Connecticut. Among its fifteen tracks are the composer's Fantasia and Fugue in G minor; Passacaglia and Fugue in C minor; and Christopher's arrangement of the Italian Concerto. 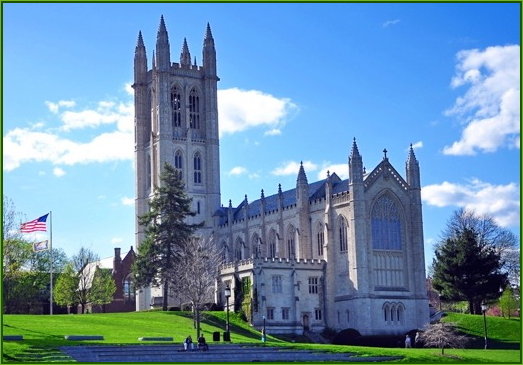 "I grew up having my first organ lessons there. I am an Artist in Residence at the college now. I wanted to record Bach on a modern organ. It's not an historical recording. I wanted to play Bach in a very colorful way, with a wide range of sounds and dynamics. The beautiful thing about the Trinity College organ is that it has all that color and fire and maintains a lot of clarity - even at full organ. It seemed like it would be an interesting experiment. I'm really happy with the way the recording came out.

"Historical organs are certainly very colorful. On a modern organ you can have, within the same piece, a wider variety of sounds and dynamics. You can have big crescendos, colors and sounds that Bach didn't know himself or would have been able to execute on organs that he knew - but which I believe are in the spirit of the music. It's a little bit like orchestrating a Bach piece for a Mahler-size orchestra - you take a few liberties. It may not be exactly what Bach heard, but I hope the recording highlights other aspects of the music in a new way." 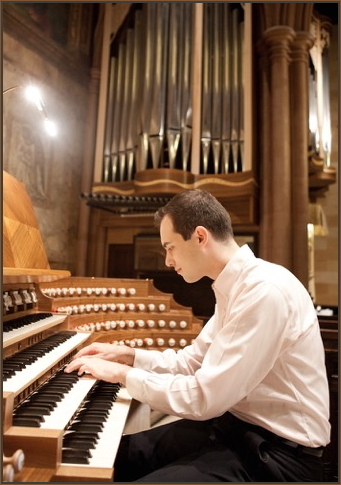 "When you are lucky enough to sit in a space like Grace Cathedral and can hear a great instrument and take the time to appreciate it - I don't know of anyone who hasn't taken something away from that experience and have been moved in some way. It's incredible. There's nothing like it. But it takes an opportunity and a bit of aloneness on the part of the listener to engage with what they're hearing. That's really what I try to do - to engage the listener to feel something, to go on this musical journey with me, to listen to what these composers wrote down and felt that people needed to hear. I try to focus on the music I love. And to communicate it the best way possible to anyone who will listen. Great music keeps me going - the music of Bach and Franck. That has to be my motivation. Absolutely, my best motivation."