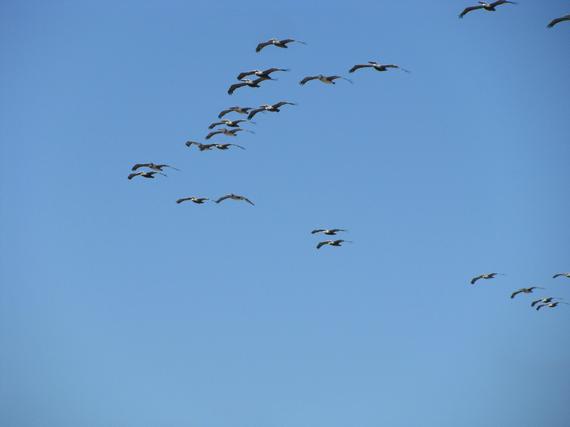 Despite its long history of success and its continued use by most established businesses, hierarchical management is an unsustainable organizational strategy in a world transformed by the digital revolution. The problem with hierarchical management is that it assumes that organizations are essentially machines, which explains why the typical organization chart resembles a mechanical schematic. But as everyone knows -- except, perhaps, those who pull the levers of power -- people are not cogs in a Borg-like structure, and thanks to the recent digital revolution, resistance is no longer futile.

In today's post-digital world, business happens in a hyper-connected global network where people can work directly and effectively with each other without having to go through a central organization. This development has spawned a new breed of leaders who eschew traditional organization charts because they assume that high performing human organizations are complex adaptive systems that behave more like organisms than machines. That's why the leaders of companies such as Gore, Morning Star, and Valve, design their organizations as peer-to-peer networks rather than top-down hierarchies.

Intelligence Resides in the Whole System

Complex adaptive systems share three common organizing principles. The first is that intelligence resides in the whole system. Peer-to-peer networks produce intelligence only when they have the capacity to aggregate the diversity of knowledge that resides within the whole system. Thus, organizations are most intelligent when they have a rich diversity of perspectives and the means to aggregate the collective intelligence derived from all the different points of view. This is in stark contrast to the conventional belief that the smartest organizations are those that identify the brightest among them and amplify their individual intelligence by giving them the power to define organizational thinking and to direct the activities of the many workers.

The management author Margaret Wheatley wisely observes that "the greater the ability to process information, the greater the level of intelligence." In a rapidly changing world, intelligence is often the distinguishing competitive advantage. This puts hierarchical organizations at a disadvantage because, by design, they lack the processes to tap into the rich resource of their own collective intelligence. However, as more managers come to appreciate that businesses are essentially information processing networks, they will hopefully learn that any company that cannot effectively process the full scale of its human intelligence is operating with a severe limitation.

The second organizing principle of complex adaptive systems is that simple rules guide complex behavior. This notion is completely counterintuitive to conventional wisdom. We usually think that complex structures will work only if we have detailed blueprints or a comprehensive set of rules and regulations. While this is often true for mechanical tasks, it is not the way biology works. In the organic world, the secret to effective execution of complex tasks is that order emerges from the collaborative application of a few simple rules rather than by compliance with a complex set of controls.

For example, in The Wisdom of Crowds, James Surowiecki describes how a flock of birds accomplishes its group journey by creating a well-ordered formation that emerges from each of the birds following a set of four rules: (1) stay as close to the middle as possible, (2) stay two to three body lengths away from your neighbor, (3) do not bump into another bird, and (4) if a hawk dives at you, get out of the way. By following this simple set of rules, the flock is able to self-organize its journey, reach its destination, and handle any predators it encounters along the way. There's no need for a dominant leader directing the activities of the flock, when collaborative focus around a simple set of rules does a better job.

The self-organized flight of birds is just one of nature's many examples of how complex orderly structures emerge from a few simple rules and cooperative autonomous interactions. The rapid efficiency of these complex adaptive systems clearly demonstrates that consistent execution does not necessarily require elaborate control structures. There are often circumstances where consistency is better served through the collaborative actions of self-organizing independent agents following a simple set of rules. Thus, one of the distinguishing characteristics of complex adaptive systems is that responsibility for control and coordination rests with each of the individuals rather than with one central leader.

Order Emerges from the Interaction of Independent Individuals

The third principle of self-organizing systems is that order emerges from the interaction of independent individuals. In the natural world, there are no blueprints. Order is not preordained before the work begins, but rather emerges through an interactive process between the individuals and their environment. Because processes are evolutionary, we can't know the result before it occurs. This is contrary to all the conventional wisdom about the importance of detailed planning for the effective accomplishment of results. The idea that a large organization would approach an important initiative without a specific plan, and instead let the results be defined by the interaction of the workers, is completely contrary to a hundred years of accepted management practice. But this notion is the foundation for how Google works.

For example, a few years back on a Friday afternoon, Google's CEO Larry Page was inspecting the prototype of the company's prime revenue generator, Adwords, when he noticed the application was producing useless ads. Rather than initiating a directed corrective action plan, he printed a sample of the flawed pages, posted them on the bulletin board on the wall of the company kitchen, wrote "These Ads Suck" across the top of the pages, and then went home. Over the weekend, five Google colleagues -- none of whom had responsibility for the ads project -- voluntarily worked on a successful fix that was ready the following Monday morning. Not only can order emerge from the interaction of self-organizing people, but oftentimes it's far faster than traditionally planned projects.

The digital revolution is radically changing the rules of business. In a hyper-connected world, the best-designed organizations don't resemble machines; they look more like the murmuration of a flock of starlings.