A new test of NASA's future deep-space capsule for crews is reigniting the tradition of recovering NASA spacecraft from the sea.

In the still waters near a pier in Naval Station Norfolk in Virginia, a prototype Orion spacecraft was successfully brought on board a navy ship for the first time.

“It was nice to see how the ballet of it all performed,” said Lou Garcia, NASA recovery director, in a statement. [Photos: Orion Space Capsule's Parachute Test]

Navy divers put tow lines on the test capsule and brought Orion to an open space (known as a well deck) below the main deck of the U.S.S. Arlington. Once the spacecraft was safely inside, water inside the well deck was drained until Orion was flat on the surface.

It's been nearly 40 years since the last Apollo spacecraft — one that formed part of the Apollo-Soyuz mission — splashed down in the Pacific in 1975. After a generation of landing space shuttles on land, NASA chose to shift back to water-based landings for Orion as it eyes missions beyond Earth orbit. 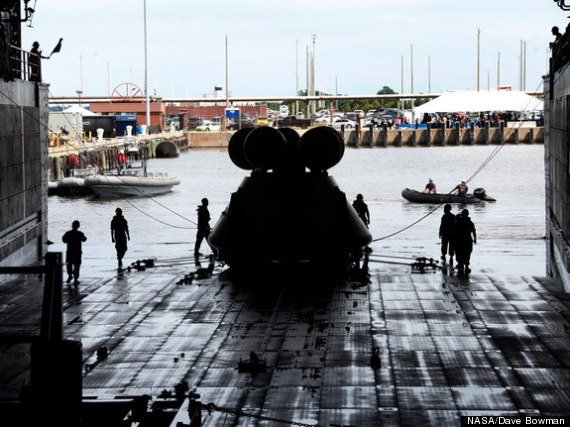 An Orion test spacecraft is silhouetted on the carrier deck after recovery test.

This particular test took two years to accomplish as NASA and the Navy worked together on the recovery procedures. The landings will be out in the choppy ocean, but they chose as a first step to do a test within a controlled environment – the waters next to a pier.

"This allows us to practice our procedures in a benign environment with no ship movement and minimum wave action," Jim Hamblin, a landing and recovery element operations manager with NASA's ground systems development and operations program, said in a statement.

The next step is to do the procedures on the open water, which will happen around January 2014. Orion's first test flight, known as Exploration Flight Test (EFT)-1, is scheduled for September 2014.

EFT-1 will bring an uncrewed spacecraft 3,600 miles (nearly 6,000 kilometers) above Earth — about 15 times higher than the orbit of the International Space Station. Orion will then do a high-speed entry, traveling up to 20,000 miles an hour (32,000 kilometers an hour) before splashing down into the Pacific Ocean.

Engineers plan to gather information on Orion's flight systems, heat shield and other systems to refine the spacecraft's design before humans climb onboard later in the decade.