The Orlando shooter was the son of Afghan immigrants who had fled their war-torn country; he was resentful of what the U.S. had done to his homeland. The gunman from Dallas was a U.S. soldier in Afghanistan; he was killed by a remote control bomb developed for and battle-tested in Afghanistan and Iraq.

The link between the two is the continuing U.S. war in Afghanistan. But you would be hard pressed to find any mention of that from LGBTQ NGO "activists" talking about Orlando, or from anyone talking about Dallas.

Yet many self-professed "progressive" LGBTQs are loud in their support of "intersectionality," a term which means the finding of common cause within and among groups of the oppressed. Yet aside from pointing out the obvious, that most of the Orlando victims were LGBTQ and Latino, and to lesser extent, that people shouldn't scapegoat Muslims in the U.S., their response to the Orlando massacre abjectly failed the test of genuine intersectionality.

Instead, it was the same old tunnel vision, the familiar nationalist myopia of LGBTQs in the U.S. thinking only about "our issues," with the rest of the world, gay and non-gay, as a distant after-thought at best.

The result is that tragedies like the Pulse nightclub attack are hijacked by the professional political class for crass political gain. Consider the Democrats' phony Congressional sit-in to force Republicans to take up the issue of gun control: Rather than address the conditions that give rise to violence, the Democrats promoted the most reactionary, anti-civil libertarian, pro-national security state "reforms" under the rubric of gun control. Anyone on the executive branch's national security "watch list" - with no oversight of the selection criteria used and no due process procedure for getting off the list - is denied the right to own a gun.

To say that this reinforces a horrible precedent is an understatement. It unconstitutionally augments the government's unilateral power to penalize those, particularly people of color, who it designates as "security risks," with implications far beyond gun control and freedom of movement.

In diverting an anti-LGBTQ tragedy into reactionary legislation, the Congressional sit-iners were in familiar territory. After the 1998 murder of Wyoming college student Matthew Shepard, Congressional Democrats ignored the hate-inducing, anti-LGBTQ legislation that they had played the primary role in promoting - Bill Clinton's 1996 Defense of Marriage Act and his 1993 Don't Ask, Don't Tell law. Instead, they promoted "hate crimes" legislation that only served to promote Clinton's mass incarceration binge which was already devastating communities of color.

A true, intersectional approach to the Orlando tragedy would have helped expose and deflect this crass opportunism.

For while gun violence here currently dominates U.S. domestic politics, the longest war in U.S. history - where gun violence is on steroids - drags on in Afghanistan. But of course neither liberals nor conservatives, Democrats nor Republicans, like to talk about that. After all, they're the ones approving the appropriations that continue the drone bombings, that maintain hundreds of U.S. bases worldwide while building new ones, and that fund the U.S. role as the world's biggest arms exporter, many of them to the most venal, brutal regimes. But gun control Democrats are almost entirely silent about that.

Almost two generations ago the U.S. attempted to dominate Southeast Asian countries by propping up a hopelessly corrupt client state in South Vietnam. The U.S. knew that that state would collapse like a house of cards if it exited the country. Today, presidents both Democratic and Republican follow much the same script in Afghanistan, with traumatic results there, but also "collateral damage" back home in Orlando and Dallas. The U.S. client regime is so illegitimate in the eyes of Afghans that despite many billions of dollars of latest high-tech war making gadgetry and a decade and a half of U.S. and other foreign troops, "The Taliban controls more territory than it has since the U.S.-led invasion there began in 2001, according to U.N. estimates."

Today's LGBT NGO's are rightly derided as "Gay, Inc." [2] Genuflecting to their Democratic Party allies, their intersectionality pales in comparison to the young LGBTQ movement that emerged out of the Stonewall Rebellion, which put real intersectionality into practice well before the term was even coined.

So unlike the National LGBTQ Task Force's opposition to the 2003 Iraq invasion, which was grudging and tepid, with "activism" largely confined to issuing press releases, the earlier movement, with far more to lose, was in the streets making common cause against the war. At a time of rampant, violent government repression, they showed active solidarity with the Black Panthers and others fighting for justice on "non-LGBTQ" issues. While Stonewall era organizations regularly organized numerous protests, The Task Force probably hasn't initiated a single street protest in decades, at best passively lending its name to activities organized by others.

When Chelsea Manning was brutalized in military prisons for exposing U.S. forces' slaughter of journalists and civilians in Iraq, the U.S. slaughter of Afghan civilians, and Secretary of State Hillary Clinton's support of Honduran military coup, the Task Force and the rest of the LGBT NGOs sat on their hands, and some actively encouraged her prosecution. And recently, despite escalating racist ethnic cleansing of Palestinians, the Task Force allowed pro-Israel forces [2] to hold a reception at their annual conference in Chicago. 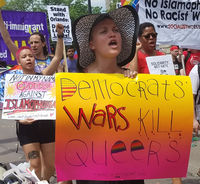 Which leads to the fundamental question: Who really leads the LGBT movement? Gay, Inc. - or the Democratic Party and its corporate backers to whom it owes fealty? As Burkely Hermann suggests, "follow the money.... The banksters who helped plunge the [2008] world economy into economic crisis sponsored a number of organizations including the HRC, NGLTF, GLAD, PFLAG, NGLCC, Out and Equal, GLSEN, and GLAAD."

And who are these sponsors? Too big to fail Wells Fargo, Citibank and GoldmanSachs. But also defense giant Northrup Grumann and giant oil polluters BP and Shell. And of course Nike, with its atrocious human rights record in places like Malaysia, Pakistan and Vietnam.

Today these giant corporations find it convenient to their bottom line to appear gay-friendly. But all that can turn on a dime. In the U.S., support for LGBTQ rights is fairly broad though far from universal. History has shown that such support can rapidly wither in severe economic downturns. We must be vigilant and principled. In the wake of Orlando, when Gay, Inc. and its political allies confine the messaging to banalities like "hate is bad," or worse, divert people towards reactionary legislation, we must oppose them.

When Democrats or Republicans express remorse over the Orlando massacre, we must implement true intersectionality by exposing their hypocrisy. We must point out that their support of U.S. domination of large areas of the world fuels the very violence they say they oppose.

No matter how unpalatable and unpopular it may be to others in denial, we must stand with the savage truth: Bipartisan drone bombings, invasions, massive arms exports, support for dictators and ethnic cleansing regimes like apartheid Israel have fueled violence in the Middle East and South Asia to a scale never before seen in history.

We must insist that if we are serious about ending the violent blowback seen in Orlando and Dallas, we must end the decades of U.S. military domination of South Asia and the Middle East as well.