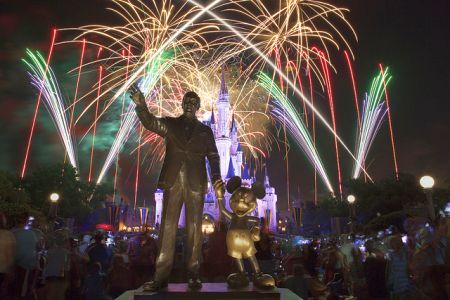 Travelers already consider Orlando, Florida, a bona fide family vacation destination, but many may be surprised to find that it also appeals to those traveling without little ones. While you might not associate hour-long lines and hordes of children with romance, Orlando's theme parks can be enjoyed not only by kids, but also by the young at heart. From plush resort spas to sophisticated restaurants, here's how to plan a grown-up trip to the Theme Park Capital of the World.

See: Best Things to Do in Orlando-Walt Disney World

Reserve a VIP tour
You're an adult now -- time to break open the piggy bank. Spend a little extra on a VIP Tour and let a personal guide plan your park day for you. Both Universal Orlando Resort and Walt Disney World offer these services -- for a price, of course. But with VIP access, you'll be able to skip lines, take private transportation between the park and your hotel, look behind the scenes and enjoy preferred seating at parades and firework shows. Disney VIP tours range from $315 to $500 per hour for a minimum of six hours, while Universal offers similar services for $299 to $329 per person. Keep in mind that these prices do not include park admission and can fluctuate during peak season. The cost may seem steep, but think about what you're getting: You'll be able to squeeze in a few day's worth of activities into just a few hours. Plus, you can finally fulfill that lifelong dream of repeating your favorite rides over and over again. Note: Universal is a little more generous with its VIP privileges compared to Disney: Instead of receiving an unlimited FastPass+ (a virtual system that reserves your spot in line), you can go straight to the front of the line.

Unleash your inner thrill seeker
If you're traveling without young kids, now is the time to try some heart-pounding rides. Universal boasts quite a few, including The Incredible Hulk Coaster, Doctor Doom's Fearfall and the Revenge of the Mummy roller coaster, among others. If you are traveling with young ones, the park has you covered there: Universal ensures that both parents can experience the rides with its "child swap" program. No, you can't trade your kid for one who's better behaved, but if you do have a child who doesn't meet height requirements or is simply unwilling to go on a ride, there's a waiting room where one member of your party can wait with the child while other members ride. Then, the waiting adult can switch places without having to get back in the front of the line.

Take a culinary trip around the world
Epcot theme park in Walt Disney World is home to the World Showcase, which features an array of cultural information, historical exhibits, entertainment, shopping and dining from 11 countries. Here's where adults make the most of Epcot, thanks to the showcase's international culinary buffet and cocktails unique to each nation. Journey from each country's pavilion sipping native spirits like avocado margaritas in Mexico, Veuve Cliquot in France, craft beers in Germany and even frozen Kirin beer in Japan. Each country also boasts a fine-dining outpost: Canada's Le Cellier Steakhouse, Germany's Biergarten Restaurant and France's Monsieur Paul are among the standouts. And for the ultimate foodie experience, visit Epcot during the fall for its International Food & Wine Festival. This six-week-long event features food and beverages from more than 25 countries.

Unwind with surprisingly vibrant nightlife
Without young, picky eaters in tow, you can take advantage of some of the parks' more innovative restaurants, not to mention adults-only venues. Universal's CityWalk offers a bevy of restaurants, shops and even nightclubs. Check out Cowfish, CityWalk's newest eatery and a self-described sushi burger bar that features a menu of sushi rolls, burgers and even "Burgushi" -- an inventive combination of the two. After dinner, head over to Rising Star, where you can belt out karaoke classics with a live band and even backup singers.

If you're sticking around Disney World after hours, head to the BoardWalk. Reserve a table at the whimsical, Coney Island-themed Flying Fish Cafe, where you can sample seafood and seasonally inspired fare. After dinner, grab a nightcap at Jellyrolls, a dueling piano bar that's one of the few Disney establishments reserved for the 21-plus crowd. Downtown Disney is still evolving, but its transition to Disney Springs will nearly double its offerings and include restaurants like Morimoto Asia, THE BOATHOUSE and STK Orlando, which are expected to open in 2015.

Relive childhood memories
Nostalgia is something Disney does well. Old classics that you rode when you were a kid like Peter Pan's Flight and It's a Small World are still around and will instantly transport you back to your childhood. There are also tons of new rides in the New Fantasyland built around Disney classics from its renaissance in the 1990s, like Enchanted Tales with Belle and Under the Sea -- Journey of the Little Mermaid. Plan your visit to the Magic Kingdom carefully, though, as Fantasyland is (not surprisingly) crawling with kids. Sign up for Disney's FastPass+ service so you can bypass long lines. Also try to avoid visiting during times that coincide with school breaks when parks are the most crowded. While you're here, secure a reservation at Be Our Guest (the only establishment in the Magic Kingdom that serves alcohol) for a romantic, candlelit meal.

Spend a day away from the parks
Soak up some R&R at the theme park resorts' surprisingly posh spas. Visit Senses -- A Disney Spa at Disney's Grand Floridian Resort & Spa or the Mandara Spa located in both the Loews Portofino Bay Hotel at Universal Orlando and the Walt Disney World Swan and Dolphin. For more of a splurge, visit the new Four Seasons Resort Orlando at Walt Disney World Resort, which boasts a 13,000-square-foot spa, not to mention a Tom Fazio-designed golf course and a rooftop steakhouse. And for a little added romance, book a treatment for two in one of the spa's couples suites or private spa bungalows.

About the author: Katie Goldstein is a freelance travel journalist specializing in luxury travel and lifestyle. In addition to U.S. News & World Report, her expertise has been featured on The Huffington Post, Fox News, Fodor's and Forbes. She also chronicles her luxe escapades as her alter ego on Travelingpanties. You can follow her on Twitter @Travelpanties, on Instagram, on Facebook or circle her on Google+.