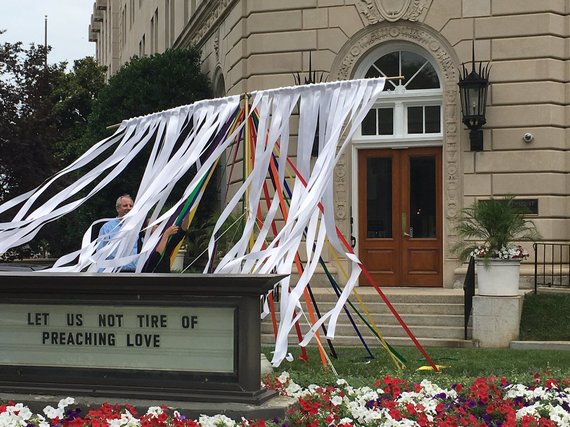 In the early hours of Sunday morning, a gunman entered a LGBTQ+ nightclub on Latin Night, taking the lives of 49 people and injuring 53 more. Words cannot describe the overwhelming sense of loss and pain. This was an act of hate -- hate against which all of our religious and moral traditions teach. Together we mourn, in anger and disbelief, and together we must root ourselves in the love that drives us to act against hate.

The default response to violence in America often takes one of two forms, equally pernicious. The first is that we all stand together, gay and straight, Christian and Muslim, black, brown, API, and white, until the fear of the other regains its grip, grabs our attention and drives us apart. The second, which is worse, is a rush to judgment, the inevitable lunges to grab headlines by those using an isolated example of violence to demonize an entire group, slap down a President, elevate one person by denigrating others for political or social gain.

Such a xenophobic and tribal response to violence has no place in a democracy, in fact it is the one facet of self-interest that democracy was established to temper, if not eliminate altogether. Simply said, it is no more appropriate to blame all Christians for acts of mass killings done by a self-professed Christian than to blame Muslims when the perpetrator identifies as Muslim or has a "Muslim-sounding" name, and I can only hope that pundits as well as candidates for elected office realize their responsibility for not laying blame where blame does not belong.

People of faith know the spiritual peril, though too often forget it, brought on by the impact of speech which makes people into an "other." The spiritual, cultural, moral and visionary hope held out by great leaders of all the faiths, and ultimately God, stands starkly opposed to those who preach division over unity.

This month started as a month of joining together through interfaith Iftars across the nation, communities coming together to celebrate this country's glorious diversity in faith. And after the Orlando shootings it must end as a month of going even further to deepen our relationships one to another across the boundaries of faith by rising up with concrete acts of love and protest from every corner of the faith community. Too many communities of God's people who have unthinkingly been branded as "other" in our country have been over and over the targets of hate crimes and acts of violence -- sometimes it takes a wake-up call.

We're in this together - this is a time when we need to stand up and say no to targeting and blaming Muslims for the actions of a criminal who claimed the badge of religion to justify his heinous acts. As our Muslim neighbors continue to say "not in our name" in all the mediums through which that message can be put out, we must support them and come alongside one another in defeating hate and violence. You cannot love someone by proposing to exclude them - being rooted in love is how we take action together.

Rooted in Love means standing strong, with both feet on the ground, in the face of injustice and bigotry.
. . . Looking to your Creator, who hates bigotry as much as you should;
. . . Leading your Community, where all can and must recognize that love stands above all else -- love of neighbor, AND love of your enemy;
. . . Holding onto your Family, whatever it looks like, which is at its best when ties of kinship and support are born of love and sustained by love;
. . . Honoring your Friends, who can be gloriously diverse, even if they all may look the same -- explore that;
. . . Walking arm in arm with your Faith Community, where love stands as the guiding principle that governs all other values;

Love, above all else is an interactive impulse, the core of humanness that makes no sense without reference to other human beings. Standing Shoulder to Shoulder against bigotry is an act of love, choosing to advocate for those who would be placed on the margins of society by hatred and ignorance. To stand rooted in love is to be a rock, a tree, an immovable object that does not bend in the winds of adversity and bears fruit that nourishes those around us. This love requires action where there is exclusion, divisiveness and violence. Let's get moving.