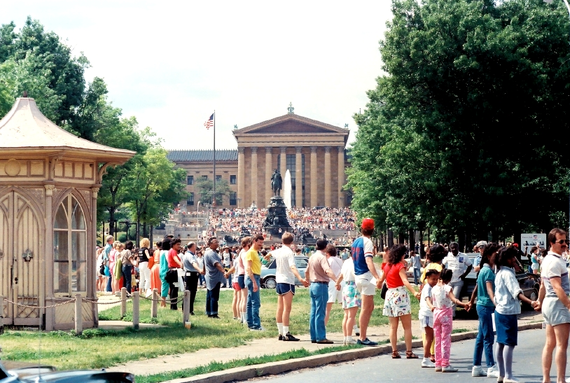 Like most of us my thoughts have returned to Orlando time and again this last week, constantly accompanied by the question, "Why do things like this happen?"

Given Mateen's ethnicity and declared allegiance to the Islamic State, it's easy to fall back on one-word answers like "extremism" and "religion." And in the heat of the moment those one-word answers seem to carry a lot of weight. Which made me curious. Just how many mass murders in the US could be attributed to religious extremism? I did a little research and discovered the answer: not many.

Of the 46 mass-murder shootings between 1984 and June 12, 2016 (as cited in last Sunday's edition of the Los Angles Times) I could find only four incidents that seemed to have an overtly religious basis: the June 12th Orlando shooting, the December 2, 2015 shooting of 14 people in San Bernadina, CA by U.S.-born Syed Rizwan Farook and Pakistan national Tashfeen Malik, the Planned Parenthood attack in Colorado Springs in November 2015 that left three dead and nine injured, and the August 2012 massacre of six people in a Sikh mosque by 40-year-old Wade Michael Page who talked about an "impending holy war" prior to the shooting.

Granted, I may have missed something. By the time I got down to #24, the April 2007 killing of 32 people at Virginia Tech by 23-year-old college senior Seung-hui Cho I was rather depressed and started skimming reports. By the time I got to the April 1999 Columbine shootings by two high school students I was numb.

But here is what I gathered from my brief investigation: The vast majority of shootings were done by disaffected males for every reason under the sun from the fear of being a virgin forever to a fear of being controlled by ELF electromagnetic waves, hatred of women in power, anger over being betrayed by a spouse, anger over being betrayed by the US government and society in general, anger at being fired, anger at being suppressed and "dissed," anger at getting bad grades, anger at parental actions.

Most cases were accompanied by a list of mental diagnoses from Asberger's to schizophrenia, drugs, failed treatments and attempted suicides--which, of course, leads us back to the issue of how such people can so easily get their hands on guns in the first place.

A few, like the 2006 shooting of five Amish girls by Charles Carl Roberts IV, a milk truck driver, seemed to come out of nowhere--although apparently Roberts confessed in a last note to his wife that he had molested two young girls and feared a return of his urges.

Which leaves us exactly nowhere for an overall explanation.

But then I ran across an article from the November 2014 edition of New Scientist titled "Most Violence Arises from Morality, Not the Lack of It," that stopped me in my tracks.

"Why would you hurt or kill someone else?" writes anthropologist Alan Fiske and co-author Tage Rai. "Contrary to popular perception, people are rarely violent simply because they lose control and fail to think about right and wrong.

"People rarely commit violence because they are sadistic or lack empathy. Across cultures and history, there is generally one motive for hurting or killing: people are violent because it feels like the right thing to do. They feel morally obliged to do it."

As Rai puts it in another article for Aeon magazine, " The purpose of violence is to sustain a moral order."

Of course, the moral order being sustained is the moral order of the individual--their personal worldview and their self-view--the status of which has somehow been violated, in that individual's assessment, by external circumstances and people.

Which means as much as we'd like to blame simple things like guns, or vast institutions like religion, what it all really boils down to is the individual's personal story about 'how the world should be' or 'how the world should treat them' has been affronted. And their shame at this violation--BTW there are studies such as "Violence: Our Deadly Epidemic and Its Causes" released by the US National Criminal Justice System arguing that shame is the deadliest emotion lying at the psychological root of violence--their shame is such that they take action the only way they can see will balance the scales.

The only possible way we will ever get beyond such horrifying massacres is to expand the parameters of what it means to be human. It means enlarging the scope of education to include emotional training and sexual identity training. It means teaching (gasp!) meditation and other methods of internal examination and mental self-control.

It means classes in tolerance. It means religious education in schools--not Christianity, but rather an egalitarian presentation of every major religious belief system with an emphasis on the word "belief" and what that word really means.

It means less emphasis on individual competition and personal "success" and more emphasis on relatedness and cooperation. It means fewer violent games, toys and movies on the market. It means embracing individual DNA testing to reveal our global kinship across false political and religious borders. It means absorbing what quantum physics has taught us--that everything is basically one thing ... that we are all connected energetically as one organism.

In other words, it means doing everything we possibly can to break down the current obsession with the individual ego "self" and its petty stories and needs and create a more global perspective.