The exhibition featured a diverse range of artwork by women artists, both from South Asia and those living in the Diaspora. These artists employed traditional elements to visualize and dialogue with some of the most complex political and social issues of their motherlands, employing a range of mediums to do so: animation, video installation, projection mapping, photography, drawing, painting, sculpture and book-making.

Through this use of different techniques and forms, the conceptual creativity and humanism at the core of the exhibition, transcends geography, ethnicity and religious barriers, successfully reaching a global audience.

The exhibition's coordinator, Negin Sharifzadeh, artist-curator, a familiar name in New York's Middle Eastern art scene, and well-known for organizing art events in Manhattan, told me that "Ornate Activate" examined the role of patterns as both historical symbols and a medium of content transmission in architecture, design, and art.

The artists included in the show have found different ways to incorporate a wide range of patterns drawn from South Asian identity and history in creating works that are relevant to, and comment on, the current state of affairs and politics in both South Asia and the Diaspora. "They are re-contextualizing patterns and craftsmanship to question political and social boundaries, and to create critical content," she wrote me in an email.

The contributing artists, while showcasing concerns in communities with different levels of socio-political development, drew attention to the global perspective on local issues and reflected the depth of empathy and understanding from the Diaspora.

"The issues addressed include violence against women, torture in prisons, child prostitution, the role of the Hijab, South Asian identity in the Diaspora, the role of religious iconology and symbols including Hamsa and Mandalas and the critique of how global capitalism is invading all markets and minds," Ms. Sharifzadeh told me.

The exhibition's own catalogue contained a superb essay by the guest Guest Curator, Alexander Campos, Executive Director & Curator of the Center for Book Arts. Campos has over 25 years of museum experience with positions at the Whitney Museum of American Art, New Museum of Contemporary Art, Brooklyn Museum of Art, Bronx Museum of the Arts and the Jamaica Center for Arts and Learning.

"The goal of the exhibition is to bring together a body of work that demonstrates a current interest by contemporary artists to merge and reclaim decorative and craft elements as meaningful and critical content signifiers," explained Alexander Compos in the exhibition's catalogue, adding that,

Ornate Activate as an exhibition demonstrates the concerns and issues being addressed by artists of South Asian origin regardless of their place of birth. The overarching umbrella of ornamentation also recognizes that contemporary artists are increasingly interested in experimenting with traditional artistic practices. This need to reclaim more tactile and decorative avenues as a way to address important current social, political and economically relevant issues at a global level also signifies ongoing artistic shifts infused by the rise of technological insertion in everyday life.

One could not fail to be impressed by some of the works such as "FORTUNE 100," an animation, by Vandana Jain who for the last ten years, has been re- appropriating and contextualizing corporate logos. "I see these symbols as part of a larger tradition of pictographic language, but they are also weighted with issues surrounding consumerism, capitalism and copyright," she explained in her catalogue's statement.

By taking these symbols out of their usual context and placing them into other frameworks, I want to create new expressions with these trademarks. 'Fortune 100' is a three-minute animation that features the top 100 global companies, as ranked by Fortune magazine, based on their total revenue for the fiscal year of 2011. 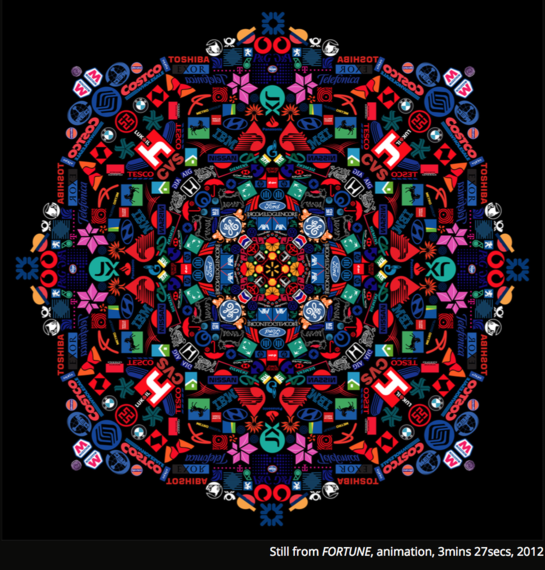 By altering a series of small portraits, Zainab Hussain, a Canadian artist who lives and works in Ottawa, creates multi-dimensional objects that speak to the identity of Muslim women who wear the hijab. She says, "This work questions common reactions towards the hijab and preconceived notions that lead to the erasure of individuality and the creation of a blanket identity for individuals based on the color of their skin or dress."

As she put in her statement in the exhibition catalogue, "with regard to the hijab, the faces and identities of women are obscured by the cultural biases of those unable to intellectually see past a veil of cloth to the individual beneath." 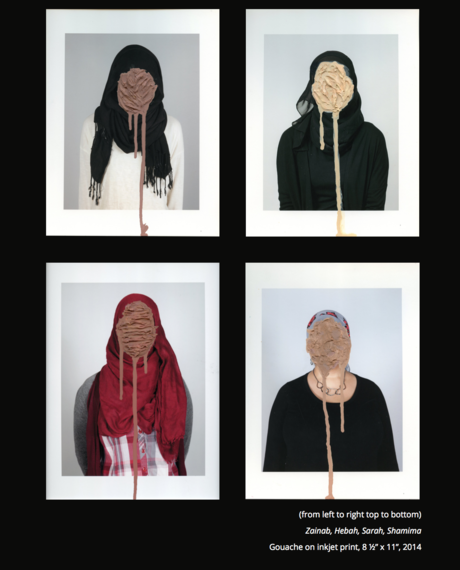 In "I'm the Queen of My Home," Parisa Ghaderi, an Iranian born visual artist, uses photography to "explore moments of pause that are filled with vulnerability, silence and contradiction." She said,

Moving from Iran to the US revealed to me an in-between state of distance. I never fully arrived and never fully left. There is always something in between which is dysfunctional and paralyzing; something is always missing. To show this void, I use cut out letters and self portraits to focus on paradoxical emotions in dealing with distance, and personal and communal loss. 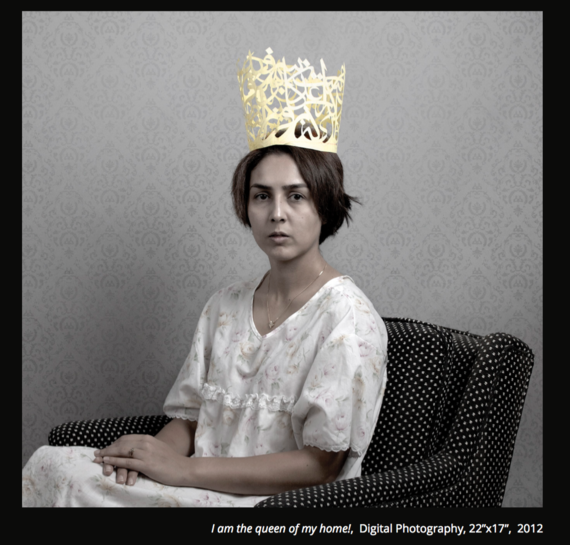 I found "Ornate Activate" to be a successful amalgamation of intellectual conflicts and challenges, with artists using symbols and mediums that have been suppressed or blurred by the influence of mainstream political and social discourse. This was a collection that seeded the signs and symbols in the mind of the audience, whose journey to explore the layers of this stunning exhibition was merely beginning as they left Shirin Gallery.