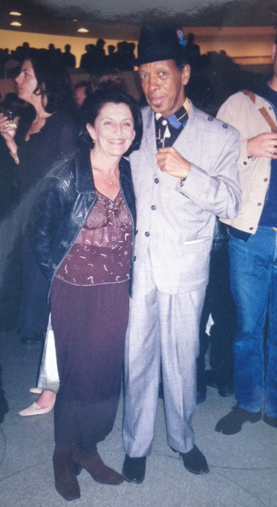 A Pulitzer Prize winner and MacArthur Fellow, jazzman Ornette Coleman died this week at age 85. Ornette Coleman's extraordinary career as an alto saxophone performer dovetailed with several poetry movements in America including his friendship and collaborations with the Beat Generation writers. He made the soundtracks on David Cronenberg's Naked Lunch (1991), based on William Burroughs' classic novel, featuring a sequence in the "Interzone" marketplace, a stand in for Tangier and Bernardo Bertolucci's The Sheltering Sky (1990), based on Paul Bowles' book about a Western couple travelling in Morocco.

In 1973, Coleman traveled to the Rif mountains of Morocco to collaborate with the famed Master Musicians of Jajouka; a short recording of these encounters, "with the Jajouka reed players' untempered approach, confirmed his belief that the "concert key" system of Western tonality was misguided, appeared on his album "Dancing in Your Head," released in 1977," according to Ben Ratliff in Thursday's New York Times obituary. As recently as 2013, "The Road to Jajouka," with the Master Musicians of Jajouka led by Bachir Attar and Medeski Martin & Wood, Mickey Hart, Flea, DJ Logic, John Zorn, Howard Shore.

In 1999, at the opening for a major Francesco Clemente exhibition at the Guggenheim Museum, Jill Krementz took this photograph of me alongside Ornette Coleman. At work on a new photography book that will include photographs of Ornette Coleman, Dizzy Gillespie and Charles Mingus, Krementz has graciously allowed me use of this photo.