WildCare's Wildlife Hospital treats nearly 4,000 ill, injured and orphaned wild animal patients from over 200 species every year. Meet a few of our patients in the story below. 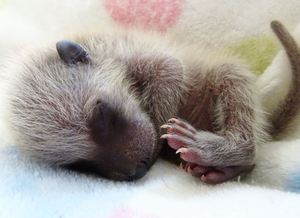 Baby raccoons are, without a doubt, some of the most charming, amusing and delightful patients we treat in our Wildlife Hospital. Because they are incredibly intelligent and curious, raising orphaned raccoons to be healthy, and to ensure they will be both successful and appropriately wild, is a daunting job!

Raccoons may be incredibly cute, but they are wild animals, and these little babies will grow into fierce adult raccoons with sharp teeth and powerful strength. Raccoons do not make good pets. As with all of the orphaned patients at WildCare, these babies will be raised to be completely wild, and they will be released into their natural habitat as soon as they are old enough. 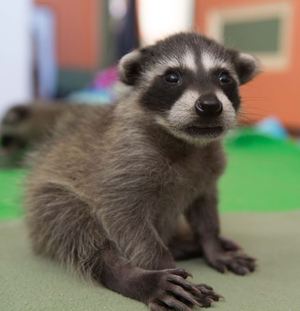 Right now WildCare has 31 orphaned raccoons in care, and we expect that number to continue rising as the summer continues.

Shelly currently has five furry orphans in her care. She has had several of these babies almost since they were born, feeding her neonate charges with special raccoon formula every two to four hours while they were still tiny with their eyes tightly sealed shut. She is now starting the process of introducing them to solid foods and (as seen in the video above) helping them discover things like moving water.

Each little orphan has his or her own sad tale about why he or she is orphaned. Shelly relates the following details about her little charges and provided us with the amazing photos in this story too! 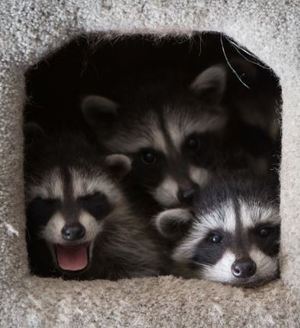 Patient #0510 (female) - came in on April 30, born (estimate) April 25. The intake form for this baby raccoon says "Mom left in a hurry." This raccoon, at around 3 weeks old, got really really sick. I honestly didn't think she'd make it. Marie-Noelle took her for about 10 days and she survived and now is back with her group and is doing great - you'd never know she hit a rough patch early on (on top of whatever rough patch landed her with us!)

Patient #0520 (male) #0521 (female) - came in May 1, born April 28. These babies were found in an attic, where they had been crying for two days with no sign of Mom. Although we can frequently reunite mother raccoons with their young (raccoons are EXCELLENT moms!) the finder of these babies wouldn't allow a reunite attempt on the property. These two are siblings, and the boy is the biggest one in the group of five I currently have in care. 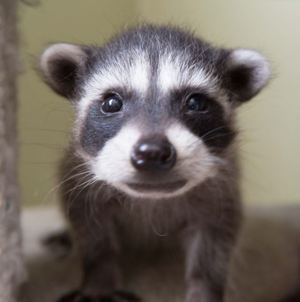 Patient #0547 (male) came in May 5, born April 28. His intake form said he was orphaned, found alone in a yard. When he arrived at WildCare, he was really, really cold, which can be deadly to a tiny baby animal. He was wheezing when he came in but he's doing great now and is the mellowest of the group.

Patient #0867 (male), came in June 8. We estimate him to have been born around April 18. He's the oldest of the group but is the scrawniest. We think his Mom was hit by a car and he was in a den in a tree for a week, starving.

This little raccoon probably had at least one sibling in the den with him that didn't survive. He must have finally flung himself out of the den and was found on the ground under the tree. He was a mess when he came in! His eyes were really sunken, and I've never seen one who looked, or felt like him. He was skin and bones! At his age, this baby should have weighed about 800 grams, but he was 338! He's a fighter though... it took about 24 hours before he started to perk up and about two days for his eyes to stop looking sunken. 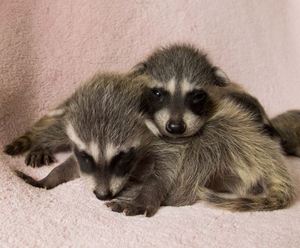 He's still half the size he should be at 520 grams, and he's at least 400 grams less than everyone else, but he's spunky and has no idea he's smaller, nor do his fellow raccoons realize he's not their size. He's still being fed more often than the others but he's likely always going to be a small raccoon.

After Shelly sent in all the stories above, Marie-Noelle provided some additional details about little Patient #0501:

The homeowner heard a horrible fight between two raccoons on their roof in the middle of the night. This was most likely a male raccoon trying to mate with this baby's mom. It's true that male raccoons will kill a female's babies in order to mate with her since a mother raccoon will not mate again if she already has a litter to care for. 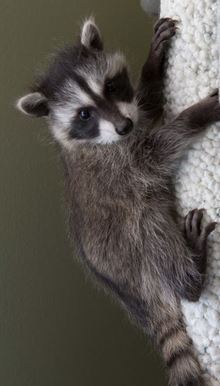 Apparently the mother raccoon successfully fought off her would-be suitor, and, once the fight subsided, the homeowners heard the back and forth of mom going in and out of the den. The homeowners knew they had a raccoon den and had decided to let the mother raise her litter and wait the 12 weeks until the family left on their own before sealing up the den site. This is something WildCare both recommends and applauds! A raccoon den on your property is only a temporary situation, mom and babies will move on, leaving the den, as soon as the babies are old enough to travel.

The sound of mom going in and out of the den lasted until about 5am. When the homeowner went to check the den, they noticed a blood smear in the entry point, indicating that the mother raccoon had been injured in the fight, and one baby left behind. (That was little #0510) The homeowners brought the baby raccoon to WildCare, and we attempted a reunite that night. The homeowner said there were originally 5 babies in the den and we were hoping mom simply ran out of time to grab all of them before the sun came up.

When we brought little #0510 back to her den, she was just a few days old, with her eyes and ears still tightly sealed shut. However, she immediately started calling for mom once she recognized the scent of the den. Unfortunately mom did not return, so this little girl went into Foster Care with Shelly. We will never know why mom didn't return for her, but we hope the mother raccoon's injuries healed well and her other kits are safe. 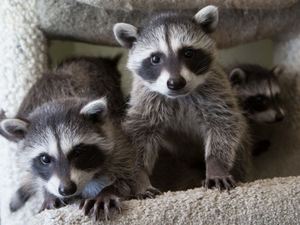 All of the baby raccoons featured in this story will be in care with our Foster Care volunteers for several more weeks. As they wean off milk formula, and start eating the foods they will find in the wild, they will also see Shelly (or any humans) less and less. These babies will grow up relying almost entirely on their fellow orphans, and will be resourceful, wily and wild raccoons by the time they are released.

Story and photos by Shelly Ross