Breeze and Button might just be the most adorable pair in the news today.

Breeze, a Dartmoor Hill pony, was found in a state of shock and dehydration -- just hours after he was born -- by a farmer in England's Devon County last month. According to an appeal published on the Mare and Foal Sanctuary website, the foal's mother was nowhere to be found, and he'd "been seen trying to suckle from a number of mares."

The organization rescued him and brought him back to the sanctuary where he received extensive care and nutrition.

But without his mother, Breeze was lonely. "Although his carers here at the sanctuary work around the clock to look after him, it’s not quite the same," Syra Bowden, Mare and Foal's executive director, said in the appeal.

The sanctuary keeps donated stuffed toys on hand to comfort orphaned foals, but their latest donation was spoken for by another foal rescued not long before. Staff members reached out to the community for a cuddly companion to keep Breeze company, and donations began pouring in.

A jumbo teddy bear named Buttons has become Breeze's snuggle buddy through the nights, according to a video by SWNS, and sanctuary staff say his condition appears to be improving.

"It’s been wonderful to see Breeze interacting with his new teddies and cuddling up to them when he goes to sleep. They are great company for him and provide comfort during the brief periods when his carers are not present," Bowden said. 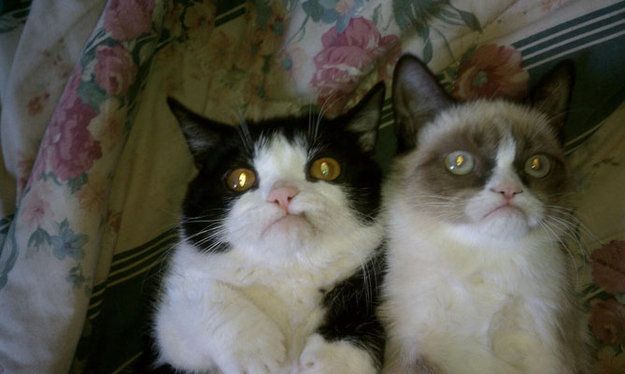 1 / 8
Pokey And Tard, Unhappy Together
grumpycats.com