One person's requirement for religious accommodation can seem all-too-much like discrimination to another.

An El Al flight from New York to Tel Aviv last week encountered delays when several ultra-orthodox Jewish men refused to take their seats next to women over religious objections.

Ultra-orthodox Judaism forbids physical contact between men and women unless they are first-degree relatives or married to one another. In an airplane with close quarters, maintaining such separation is not easy.

As orthodox and secular Jewish passengers boarded the flight scheduled to arrive at Ben Gurion airport on the morning of Rosh Hashanah, the men began asking women seated next to them to move, sometimes even offering compensation for seat changes, Ynet News reports.

One passenger, identified as Galit, was sitting next to her husband when an ultra-orthodox, or haredi, man asked her to move. But she refused to change seats, Galit told Ynet:

"I ended up sitting next to a haredi man who jumped out of his seat the moment we had finished taking off and proceeded to stand in the aisle." 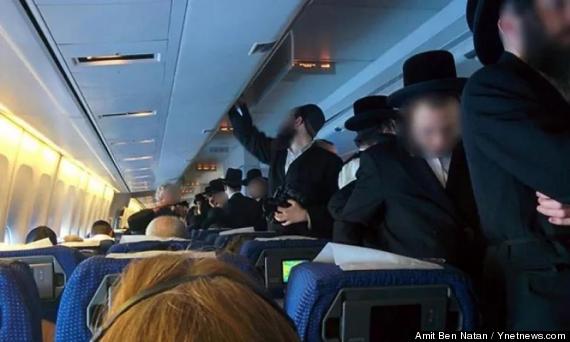 Some of the haredi men spent much of the eleven-hour flight standing and praying in the aisle, which caused general commotion and made it difficult to reach the restroom, Galit said.

The experience of Galit is not unique. Author Elana Maryles Sztokman wrote about a similar experience in a piece published on The Huffington Post:

The plane took off 20 minutes late because an ultra-Orthodox man was negotiating with passengers so as not to have to sit next to a woman -- me -- on the 11-hour flight.

While the airline told Ynet its crews try to do "the best they can to address the needs and requests of all our travelers," it is unclear in this case whose needs would be best accommodated -- the haredi men who felt religiously mandated to uphold sex segregation or the women who felt they were unfairly "bullied and harassed."

A Change.org petition started on Monday by several women in the Jewish community calls on El Al to prevent future harassment of female passengers on its flights. The petition states:

Why does El Al Airlines permit female passengers to be bullied, harassed, and intimidated into switching seats which they rightfully paid for and were assigned to by El Al Airlines? One person's religious rights does not trump another person's civil rights.

As a possible solution the petition suggests the airline reserve several rows of sex segregated seating where passengers may pay an extra fee to reserve seats and thus avoid future delays.

1 / 28
Bernard Baruch
Played a role in the formation of the League of Nations with his participation in the Paris Peace Conference in 1919; helped form the National Recovery Administration, which helped to alleviate American suffering during the Great Depression. Photo: American financier and unofficial advisor to President Roosevelt, Bernard Baruch (1870-1965 ). Photo by Hulton Archive/Getty Images.
Getty Images