The Na Nachs are a lot like your everyday Orthodox Jews, except they believe serving God involves blasting trance music, dancing on top of vans, painting their mantra on walls and driving party buses around town spreading good times to Jews and gentiles alike.

They live primarily in Israel, but there are communities of Na Nachs in the Ukraine and parts of Brooklyn, among other major cities across the globe. Although they act a little like hippies, they're actually devoutly religious men who take life seriously when they aren't dancing and beating the djembe drums.

The roots of their sect can be traced to a famous (and contentious) letter written supposedly by Nachman of Breslov, a Ukrainian rabbi who died in the 1800s. Fast forward 100 or so years to the 1920s, when Rabbi Ber Odesser said he received a letter from heaven. The letter in question was Rabbi Nachman's teachings, which he said taught him how to make everyone happy and healthy. There was also a mantra in the letter that goes like this: Na Nach Nachma Nachman Meuman.

In his letter, Rabbi Nachman wrote that when many people across the world know the mantra and have copies of the Na Nach teachings in their libraries, the Messiah will come. Not to put too fine a point on it, but Judaism's whole deal is basically getting the Messiah to return to Jerusalem, so it's important to the Na Nachs that they are as loud as possible while spreading their message.

Partying on top of vans, yelling at innocent bystanders through bullhorns, vandalizing the Holy Land -- while all that may sound like fun, it also sounds like disturbing the peace. But the Na Nachs will tell you they are only obeying Rabbi Nachman's suggestion to utilize new technology in the effort to spread their message.

I recently had the chance to tag along with three Na Nachs for a day. We started in the center of Tel Aviv at the Shuk Carmel, an open-air market and one of the biggest tourist traps in the city. As soon as we parked, my friends jumped out of the van and broke into dance for about 10 minutes. Locals and tourists alike gathered around to watch their moves. After cutting a serious rug, the Na Nachs grabbed a pull-out table from the back of the van and stacked it with many religious books, creating an impromptu book store.

Suddenly a van blasting techno and filled with four Na Nachs pulled up. They jumped out, began blowing shofars (a ram's horn used for religious purposes) as loud as they could and danced like mad men. They grabbed the van's roll bars, sending vibrations throughout. It was obvious these guys knew how to party. After a while the two groups went our separate ways. I was sorry to see them go.

We received word that some other Na Nachs were going to crash a bar mitzvah nearby, so we headed north on the Ayalon to help celebrate one of the most joyous days of a young Jewish man's life. Although we weren't technically invited to this particular bar mitzvah, we were really doing the hosts a favor. Na Nachs are a hot commodity at Jewish weddings and bar mitzvahs. They are considered a good omen at special occasions, and Israelis pay large amounts of money to assure their attendance.

We arrived early, so we decided to pre-game it in the parking lot. My friends drank Araq, the Middle Eastern anise-flavored liquor, which contains as much as 63 percent alcohol. As some of the wealthier crowd entered the bar mitzvah, the Na Nachs stayed outside blowing shofars and dancing to the smooth trance music. By the time we were welcomed in, everyone felt loose.

The Na Nachs hoisted the boy of honor onto their shoulders and carried him inside the party like a miniature king. Unsurprisingly, they dominated the party for the rest of the night.

PHOTO GALLERY
Partying and Praying with the Na Nachs

This column was originally published at Vice Magazine under the title "Partying Like a Na Nach." 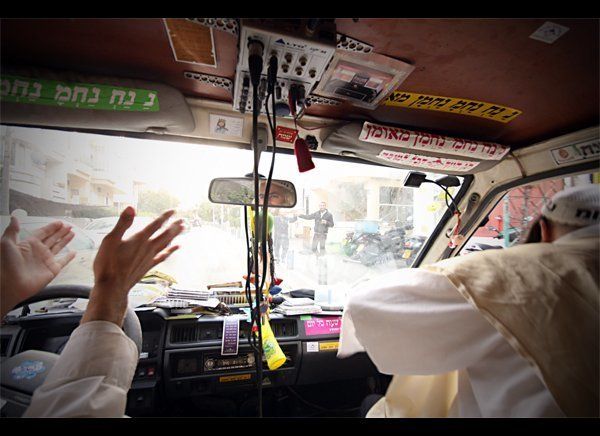 1 / 20
Greeting the youth
The Na Nachs sight two young men they can offer Na Nach literature to. The Na Nachs drive around town spreading the good word. They often get out and dance to greet locals at red lights. This happened to be a slow street so the Na Nachs were able to simply stop and talk with the two young men.