Apple on Thursday surprised the tech world by unveiling the developer-only preview of what will soon be its newest operating system for Mac computers, OS X Mountain Lion.

So, what new features can you expect on Mountain Lion (available immediately for developers, and in the summer for users)? Below, find out what's making Mountain Lion roar. Then, read on for in-depth hands-on looks at the new OS X upgrade by John Gruber (Daring Fireball) and Jason Snell (MacWorld) and MG Seigler (TechCrunch). 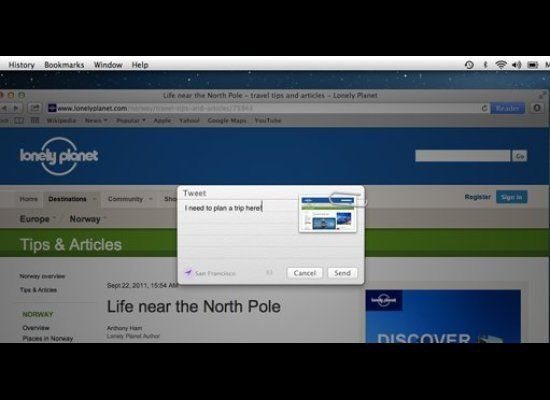 1 / 9
Twitter Integration
One of the biggest surprises is wholesale Twitter integration into the Mac operating system. Apple already shocked many with <a href="https://www.huffpost.com/entry/apple-ios-5-twitter-integration-wwdc-2011_n_871940" target="_hplink">its announcement that sharing to Twitter</a> -- and not Facebook -- would be baked into iOS, and now it is doubling down on that strategy with Mountain Lion OS X. Many apps, including Safari, Photo Booth, and third-party apps, will have the option to launch a pop-up Twitter window to share whatever it is you're doing. Notifications from Twitter will also appear in the new Mountain Lion Notification Center.
Apple