Renowned for his 1990s tenure as the Managing Director of SAMBA (or the Saudi American Bank as it was once known), Shaukat Aziz probably felt right at home during his participation as a panellist at the 12th annual Jeddah Economic Forum (JEF).

The former Prime Minister of Pakistan and veteran Citibank executive talked at the "Beyond BRICs: Seeking Economic Growth in an Era of Debt" session, which was held on the first day of the event that took place at the Jeddah Hilton March 3-6. 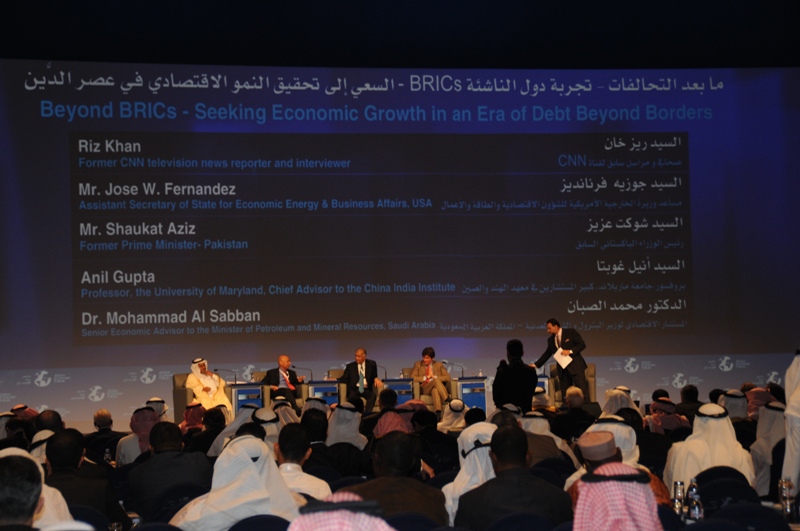 Following a successful financial career serving as a board member of several Citibank subsidiaries (which what SAMBA used to partially be until 2003), Aziz became Finance Minister of Pakistan in November 1999 under President Pervez Musharraf.

On 27 August 2004, Aziz was elected Prime Minister and remained in his post till November 2007.

Aziz's strong point has always been the economy; he was initially called in as an advisor to help bring the country out of debt; during his tenure, Pakistan saw an impressive -- albeit short-lived -- period of economic growth.

However, it was during his tenure as well that Pakistan began feeling the repercussions of the 9/11 attacks, the war on terror and the US-led offensive against neighboring Afghanistan.

Following his departure as PM, which was shortly followed by President Musharraf's, the country continued to face a series of unfortunate events, including unprecedented large-scale natural disasters, an economic meltdown and a war waged in neighboring Afghanistan by a US-led coalition against the Taliban regime and Al-Qaeda.

After it was discovered that the former Al-Qaeda leader had been living for a long time right next to a military compound in Abbottabad, the country's leadership and Inter-Services Intelligence (ISI) were assumed of assisting in harboring Bin Laden, who until recently was the most wanted person in the world.

In an exclusive interview following his participation at JEF, Shaukat Aziz categorically denies any accuracy of such insinuation. Asked if the Pakistani government or the ISI could have possibly been involved in harboring Osama bin Laden, the former PM replies, "This is totally untrue," declining to comment any further on this particular matter.

As for his views as an expert in finance on Pakistan's current economic crisis and future prospects, Aziz seems to give significant weight to what goes on in neighboring Afghanistan.

"Pakistan has paid a huge price of the geo-political situation in the area and the presence of foreign troops in Afghanistan has created a level of tension within that country," says the former PM.

"Now that it has been announced that these troops will be departing, let Afghanistan manage their own destiny, let them manage their own security," added Aziz, elaborating that given that as neighbors which are "joined at the hip," Pakistan wants to see a strong, stable and prosperous Afghanistan.

While noting existing cooperation, Shaukat Aziz believes two countries can cooperate more when it comes to matters of economy, infrastructure and energy. In addition, he argues that the banking systems can be more integrated. 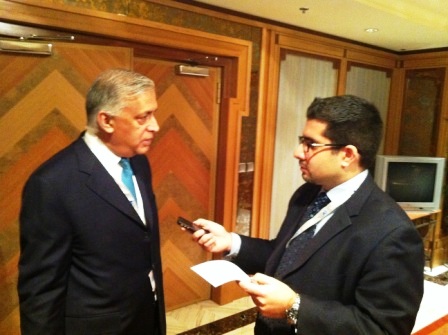 However, Afghanistan isn't the only neighbor that Pakistan has issues with; there are of course the long-standing tensions with India. On this front, Aziz stresses that "Pakistan is a country which wants peace with its neighbors, and peace comes by both countries agreeing to work closely together."

At the same time, the former PM doesn't shy away from outlining issues that are still pending, namely Kashmir and the distribution of water. He believes both issues should be "resolved peacefully in line with the wishes of the people."

As for the situation with the United States, Aziz admits that "relations have been challenging."

"Pakistan sees the US as a friend, as a major global power, and very often the strategic interests of both countries don't align as well as they should," he argues.

"Pakistan wants close and friendly relations with all major countries, we have an excellent relation with China as well as many other countries," elaborates Aziz, who says that when it comes to the US, there is "work to be done."

On the other hand, when it comes to Saudi Arabia, Shaukat Aziz stresses that the people of Pakistan have the highest respect for this country and its leadership.

"The Custodian of the Two Holy Mosques has been to Pakistan and he has the love and affection for him personally and for the Saudi people and Saudi government," he says.

Noting the existing cooperation on political and security fronts, Aziz says there is room to do more when it comes to economic cooperation.

"We could obviously do more in cooperating of areas of economic cooperation, free trade agreement (and) more investments. Saudi investors are active in Pakistan and they could do even more," he suggests.

As for his position on sanctions on Iran, Aziz says "that is all covered by the UN, so we are all members of the United Nations and we will be affected accordingly."

However, as several major countries are talking on tightening sanction on Tehran, Pakistan has recently announced that it will pursue a multi-million a gas-line deal with Iran, despite the international pressure.

Under the 2010 deal, Iran would supply Pakistan with natural gas from 2014.

"The pipeline negotiations have been going on for a long time; it is in the strategic interest of Pakistan to have better energy supplies and we will do what it takes to improve our energy security. Energy security is critical for growth and Pakistan has to protect its interests and its needs," comments Aziz.

The former PM currently resides in London; he is listed as member of the international advisory board of investment and advisory firm Blackstone, as well as a non-executive director and member the committees of remuneration and nominations at Millennium and Copthorne Hotels plc.

Asked if he has any intention to go back to Pakistani political scene; Aziz replies promptly that he has "no interest in politics."