What with the inmates running the asylum, you might think it's an odd time to talk about what I've been calling the OPA (Osawatomie Policy Agenda), i.e., the concrete ideas that grow out of the speech President Obama gave recently in Kansas... ideas in the spirit of actually building an economy that works a lot better for a lot more of us.

The New York Times editorial page weighs in on the same topic this week, stressing these policy objectives:

On jobs, the editorial board wants the president to "continue to offer stimulus bills that include spending for public works, high-tech manufacturing and an infrastructure bank."

True that, but the short term is pretty much toast. Remember, this battle-to-the-death we're having over payroll tax/unemployment insurance are for measures that are already in the 2011 economy... no one is anywhere close to considering anything new. Still, we can't give up on the present and unexpected things can happen in an election year (e.g., tapping federal help to prevent local layoffs is a very long shot, but it's about the smartest thing we could do right now, as each month we add private sector jobs and shed public ones -- and those are teachers, cops, etc.). 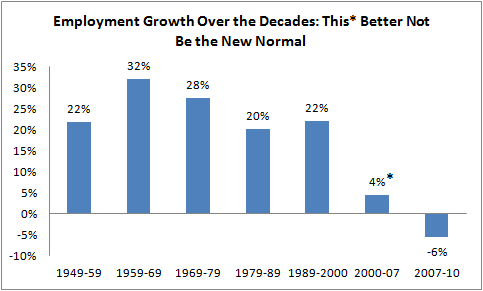 I've suggested a number of reasons for the slowdown, including accelerated labor-saving technology, allocative inefficiency (the devotion of too many resources to unproductive financial engineering), weak startups, the inequality feedback loop (extreme income concentration generates less robust employment growth), and lousy public policy (regressive taxation, the wars, unregulated asset bubbles, etc.). But more work needs to be done on what went wrong and how to fix it.

At the very least, we want a Federal Reserve committed to full employment and a public investment strategy that supports innovative growth in expanding sectors, like clean energy.

And that, to repeat, is at the very least. If there's one thing I've learned in decades of analysis, it's that it takes truly full employment for the American economy to really work. Only with very tight labor markets will we see the benefits of growth broadly shared. Absent such conditions, workers simply lack the bargaining power it takes to get employers to bid up compensation such that the gains from productivity growth reach more than just the top few percentiles.

If that 4% job growth (see * in chart), or anything like it, sticks, we will need ambitious infrastructure programs not just in bad times but in good times too. We'll need explicit manufacturing policy that builds domestic supply chains (because that's where the job quantities are). We'll need national, multi-year programs to repair the public schools, replace the failing electric grid, ensure that both the old and the young have the care they need to not just survive, but flourish.

Again, it may seem strange to start planning such an agenda when the polar opposite is transpiring in the halls of power. But then again, maybe this is exactly the right time. Maybe, as Congress creeps under the impossibly low bar we've already set for them, it's actually the right time to start promoting a new vision.

After all, I can hardly stand to look at the old one, and I can't be alone in that sentiment.