Yesterday we examined George Clooney's take on Matt King from "The Descendants," and Tuesday we put Michael Lewis' "Moneyball" head-to-head with the Brad Pitt blockbuster. Today, we'll take a look at "Extremely Loud and Incredibly Close" by Jonathan Safran Foer. The book and the movie both involve a young boy, Erik, whose father died in the September 11 attacks. As part of his grieving process, he embarks on a scavenger hunt to uncover his father and his family's past.

Our Moviefone team gave the film a score of 2 out of 5, whereas our reader, Joy Resmovits, gave the book a 4.

As their responses and this clever infographic show, the difference in scores may be in part due to the movie's sentimental tone (Moviefone says it's strictly for "grief junkies"). The book, on the other hand, gives Oskar's story context by interlacing it with scenes from his grandparent's struggle to cope with the Dresden bombing during World War II. 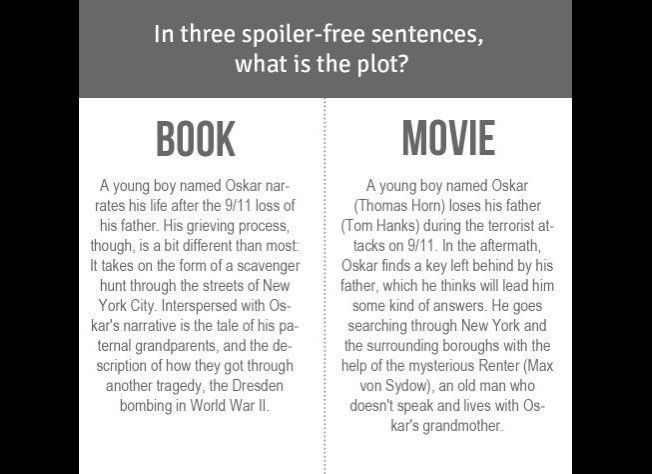