As curator of the Oscar de la Renta exhibition, now at de Young Museum of Fine Arts, in San Fransisco (closes on May 30th), it was a great privilege to illustrate in eight galleries, the comprehensive and profound depths of his career, from his early works in the Sixties, under the label Elizabeth Arden, to his own name, to the end of his life, when he died in October 2014.

The show includes 120 ensembles, curated from the best museums in the United States, including The Met, as well as Kent State University, and his friends, family and loyal clients. I hope the spectators come away with a sense of his passion for romantic embellishment, exuberance of color, deft and intricate textiles to convey opulence, and a sense of a firm foundation based on the rigors of fine tailoring and technique.

Here, I have selected 12 pivotal looks, which encompass his constant return to themes that he evolved in his work.

Look 1: Diana Vreeland's pale melon silk late day coat ( loaned from F.I.T.), one of the earliest pieces in the collection, shows his affinity to Balenciaga and the approach to modernity in simple, pure lines. 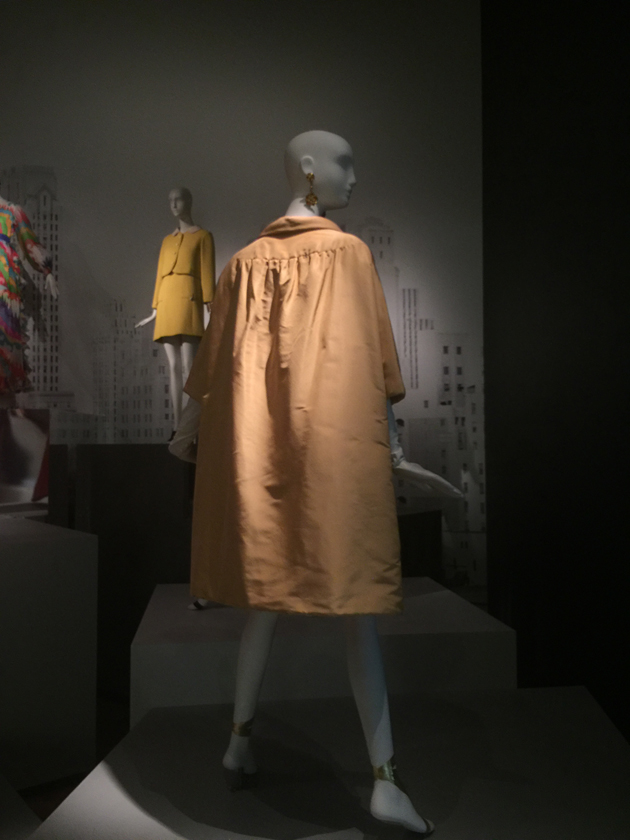 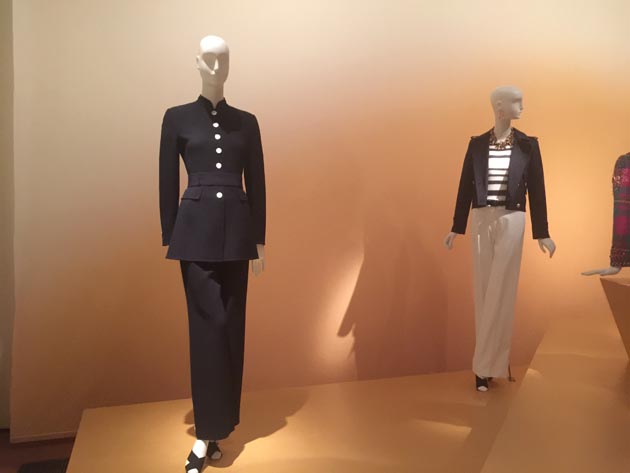 Look 3: Eliza Reed Bolen's embellished sweater and ikat printed Dirdnl skirt, street length, (courtesy of Bolen, the stepdaughter of de al Renta). It was a best-seller, in fact one of the best sellers of all times. 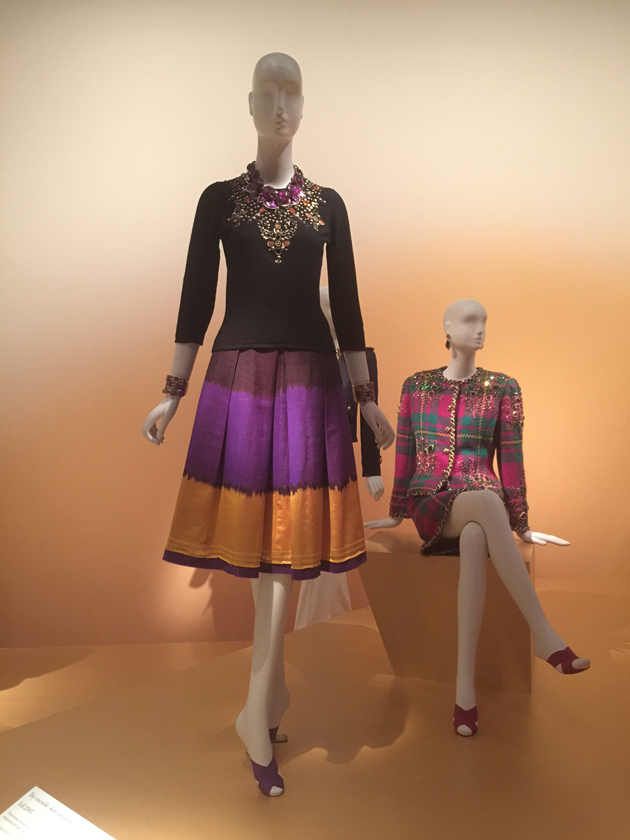 Look 4: Former First Lady Laura Bush wore it: the gold cardigan jacket and long sequin skirt embellished with a teal satin ribbon belt was worn several times, from state dinners to White House indoor Christmas celebrations. Its just one of the 54 ensembles that shows the deep collaboration of the former first lady and de la Renta. 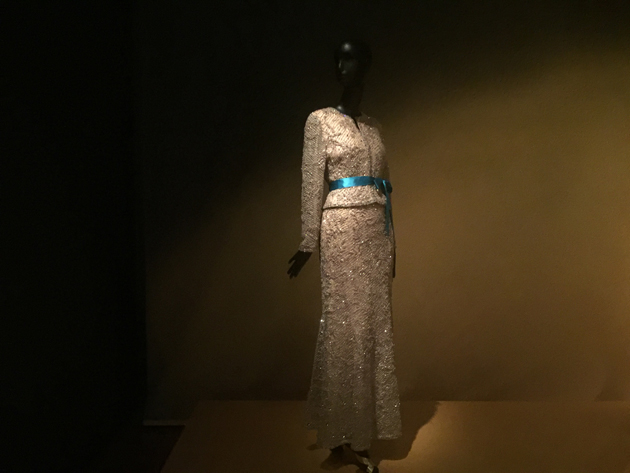 Look 5: Annette de la Renta's flounced guipure lace evening dress. "Its my favorite dress, I've ever designed for my wife," said Oscar de la Renta. Annette, a member of the Best Dressed Hall of Fame, was the designer's favorite muse. He always questioned if his design was good enough for his wife to want to wear it. This bold, grand dinner dress is inspired by Velasquez. 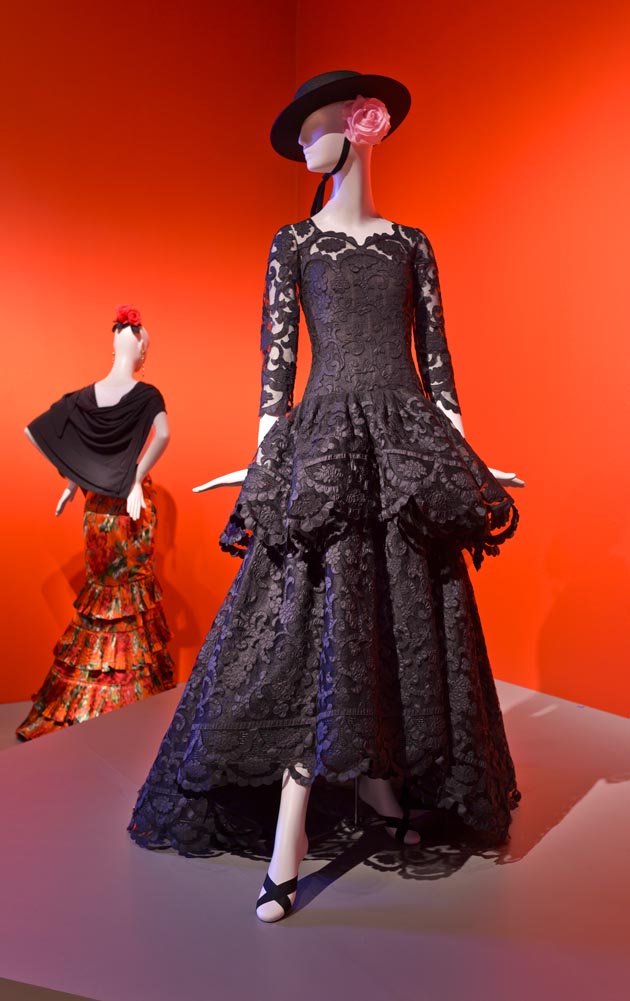 Look 6: The Balmain, black summer dance dress (courtesy of Annette de la Renta) is a strapless, black embroidered silk bodice, over a black pure raffia full skirt, festooned with two black silk tassels. The dress was brought to the museum by Mrs. de la Renta in a garment bag the day the exhibit opened. She had carried it as carry-on luggage, putting it in the overhead bin on her flight. She suggested she had worn it with a Cartier Art Deco brooch, pinned on the center bodice. We luckily had a full range of faux jewels, from the collection of ODLR, organized by Alexander Reyes, a longtime member of the de la Renta studio. I added the long white matte kidskin gloves and the black fan. 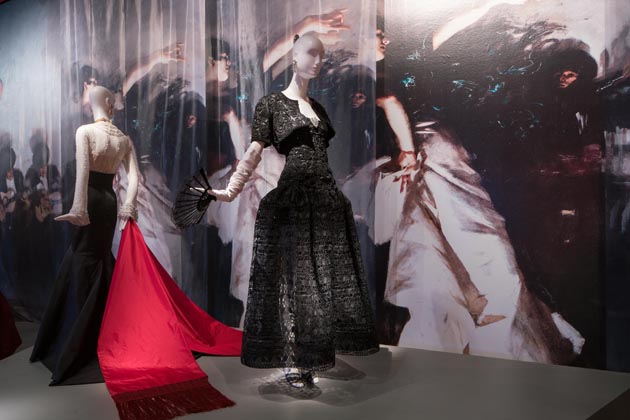 Look 7: The late Nan Kempner's velvet trousers fringed in Russian sable, and worn with an embroidered Chinese red tunic. This look is a WoW! It's a jaw-dropping stop as people walk through the exhibit. It's from Balmain's Fall/Winter haute couture. Boaz Mazor, who has worked at de la Renta since 1968 as international sales head, said of this look: "It was a best-seller. Because if you sell just one in haute couture, it's considered automatically to be a best-seller!" 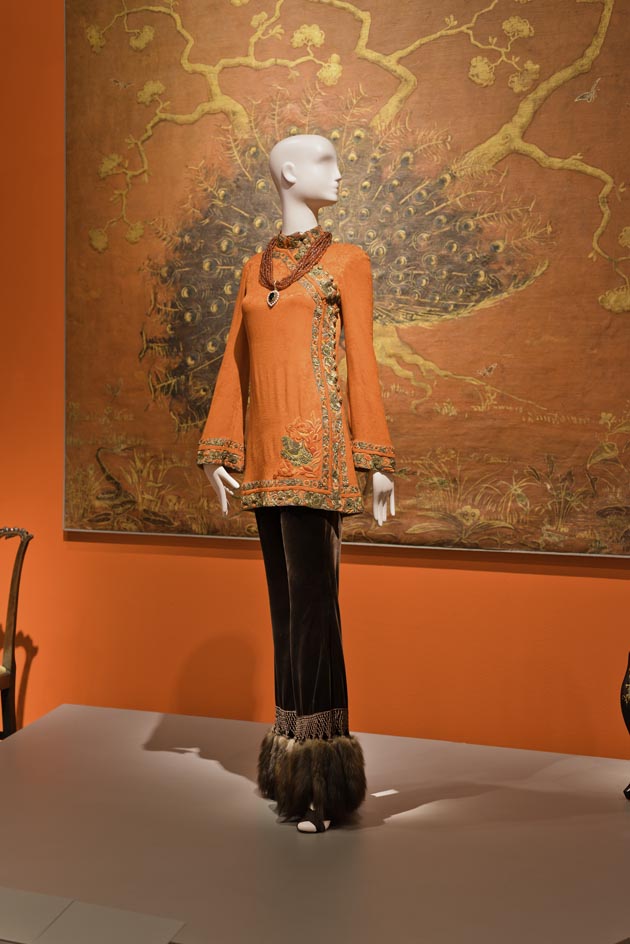 Look 8: The pale, pale blue and white ruffled dinner coat, with slim trousers and covered mules, embroidered with pearls (courtesy of Annette de la Renta). This
look from Balmain was also worn by Mrs. Charles Wrightsman. Both Mrs. Wrightsman and Mrs. de la Renta wore this to dinner at Chatsworth, the grand English state of the Duke of Devonshire. 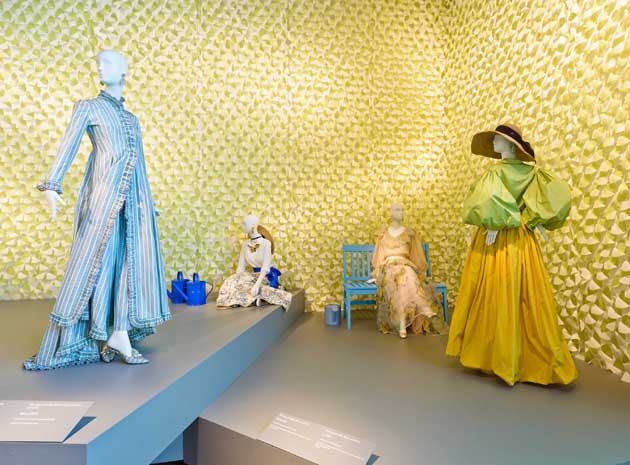 It's a frigate of a dress, and was shown as a romantic bride. I think Oscar thought of it as his Madame Bovary moment, from Flaubert's masterpiece, the first literary, gaudy consumer. I sat the mannequin in the garden room on a Bessarabian rug from the early 20th Century, which I purchased at the estate sale of the late Bunny Mellon, of Upperville, Virginia. 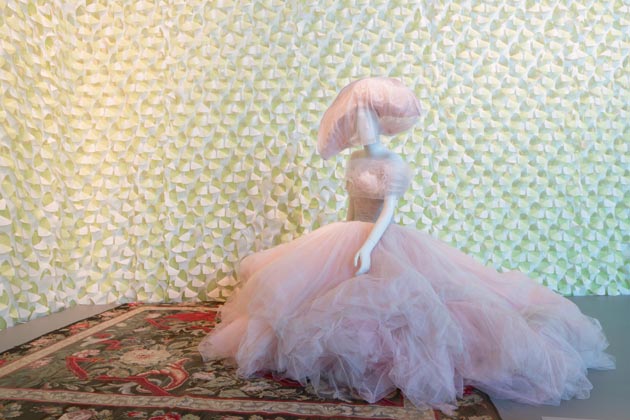 Look 10: The gold ultimate robe de style: Mrs. Mercedes T. Bass purchased this look; it was shown as a bride on the runway, and in exhibit, I accessorized it with silk lilacs, and gold tulle on the head. It took an entire weekend of hunting down the silk flowers in San Fransisco, and having the tulle arranged on the head before it became perfect and suggested a Russian bride. Notice the severe hourglass shape of the long dress. 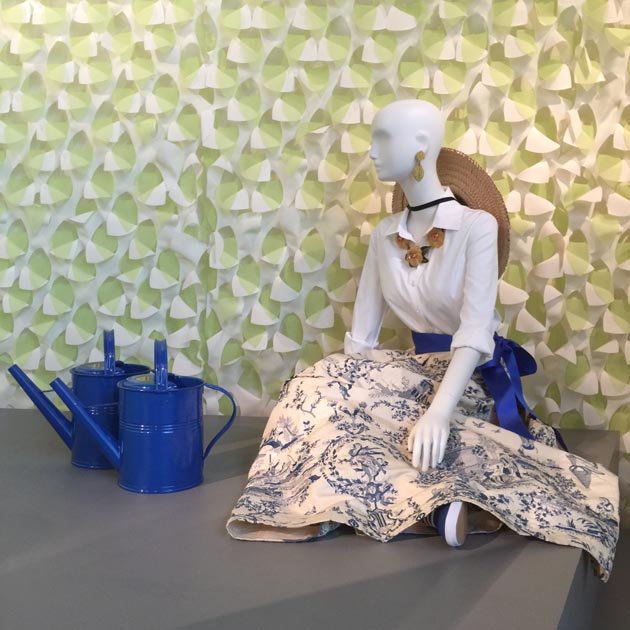 Look 11: Alexandra Kotur's blue and white sequin toile de Jouy long dinner skirt, worn with a white cotton shirt, designed by Peter Copping, the current ODLR designer. This shows Oscar's ultimate American versatility, the ability to turn a simple white button front oxford style shirt into a lavish dinner look. I showed the ensemble with flat navy blue Keds, ordered online, two watering cans from Rosedale Nursery, Hawthorne, New York, and a blue wheelbarrow from the Nederlands, dated 1890. The wheelbarrow was painted by Mark, a full time member of the de Young carpenter staff, to match the colors of the obelisk in the de la Renta, Kent, Conn. gardens, which are featured on a perfect day in June, 2015, on giant jumbotron screens. 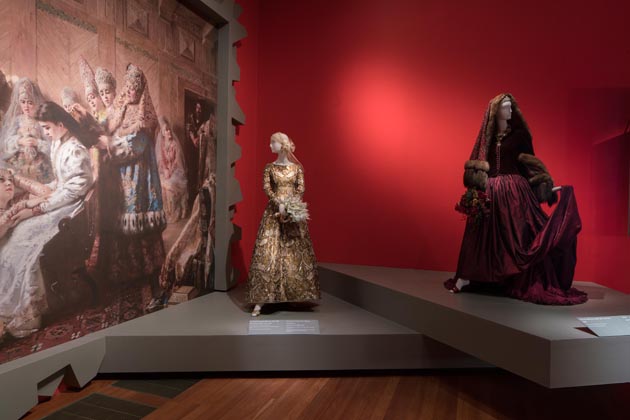 Look 12: Taylor Swift's pale, pale pink slim long silk evening column, with a dramatic train. She was 25 when she ordered this dress and it, more than anything, shows how de la Renta could design for everyone from Rhianna, Sec. of State Hillary Clinton, and Nicky Minaj, to Sara Jessica Parker, Anna Wintour, and Anne Getty. The idea of a bustle is executed in a brilliant built up origami bow at the back of waist. 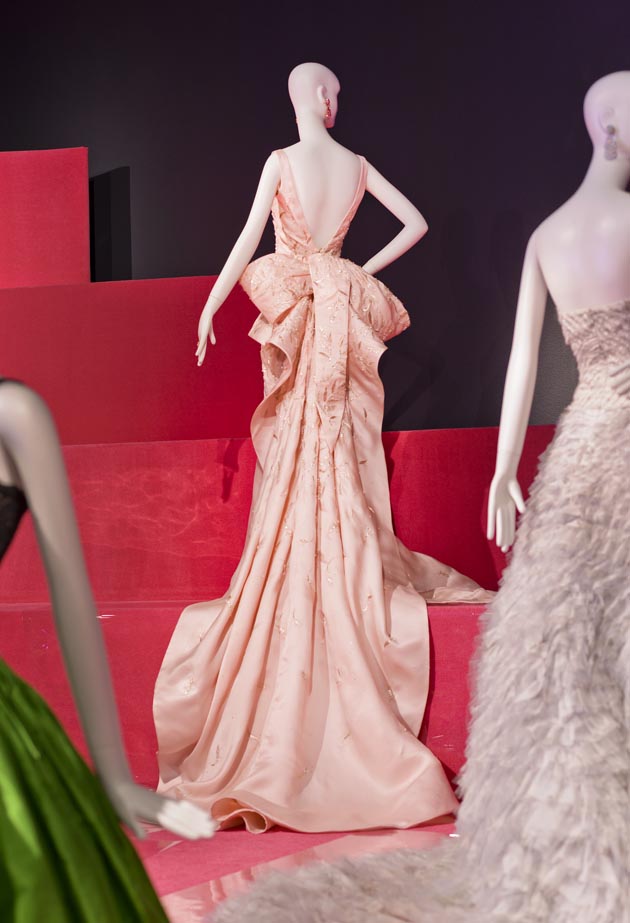